We are very pleased to announce a new music and humanitarian initiative “The Cup of Hope” alongside Switzerland’s Schirmchendrink and Volunteers for Humanity (VfH), as well as San Francisco’s Atish!

The partnership, which comes in the form of an exclusive mix to be released 4 December, 2017, will be the second from online music platform Schirmchendrink and humanitarian charity organization VfH, intending to collect money to finance medical, aid and school supplies to refugee camps around Aleppo, Homs and the Latakia area in Syria. Last year, YokoO was the cause’s musical ambassador and this year, we’re happy to have a DHA favorite over the last few year, Atish, on board for this very important cause.

Of course, the initiative is for the people affected by the war torn situation in Syria, which has raged on for years. With VfH on board, tons of supplies have already been collected and transported to the region, however there can ever truly be enough. It is critical to get materials across borders and to their proper destination safely, securely, and completely. Having developed a robust network of trusted partners and like minded organizations, VfH is one of the preeminent roganizationsorganizations working towards providing the necessary supplies. Check out the group in action in Latakia below:

The “Cup of Hope” is a simple yet effective process for any fan of humanitarianism and dance music. Simply go to volunteersforhumanity/cupofhope and donate what you can. If you do this before 31 October 2017, you will become a “partner” of The Cup of Hope, which features your name digitally engraved on the cup itself. All donations the mix download, as well as tracklist provided specially from the artist, himself. All of us here at DHA feel the situation in Syria is one of the 21st Century’s continued tragedies, given the continued targeting of hospitals and schools. 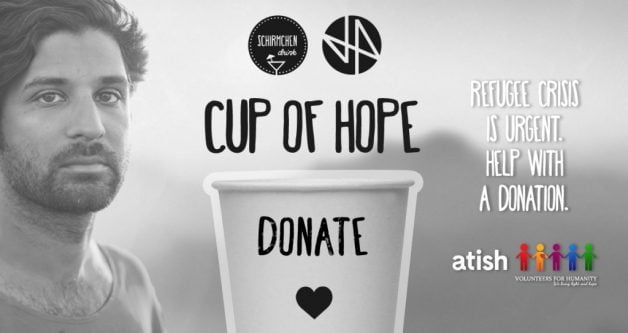