The question of what constitutes “good” male dancing is age old. We’ve all been to enough weddings, christmas parties, or proms to know that the definition of “good” is surely in the eye of the beholder.

With that, evolutionary biology researchers at Northumbria University have attempted an empirical look at the phenomenon known as male dancing, with a study entitled “Male dance moves that catch a woman’s eye”, whose results have been released. By attached a series of reflective markers, which would ultimately create a genderless humanoid digital avatar, on 30 males (aged 18-35) for 30 seconds, researchers asked the participants to react to bass-heavy music, imagining they were on the dancefloor at their favorite night spot. The recorded footage was then shown to a group of 37 (heterosexual) females (again, aged 18-35), who rated the dancing on a scale of desirability.

The study yielded results that focused on movements of the upper bdy (head, neck, and torso) as the most important factor to women. Wierd, as leg and arm movement, except for the right knee, were looked at as widely unappealing.

You can check out the graphic below for further explanation, and be sure to watch both the videos of humanoid avatars busting moves. You won’t regret it. 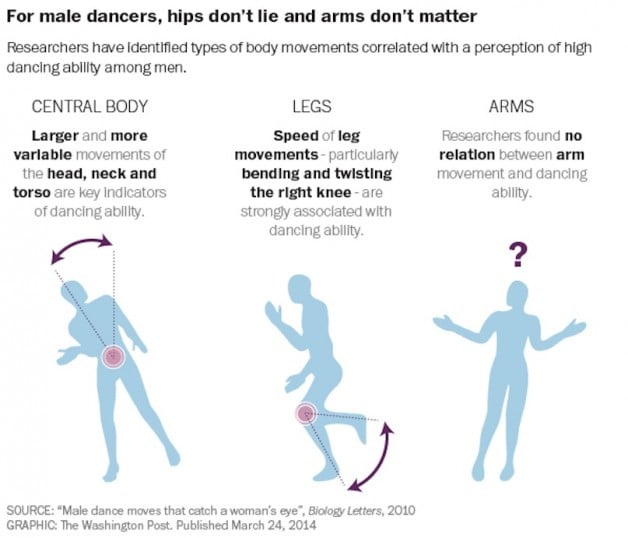