With less than a month until the 2nd edition of St. Marten’s SXM festival, we’re proud to announce our own hosted stage on its second day.

Held at the festival’s primary day time venue, Happy Bay, The Deep House Amsterdam (DHA) goes down Thursday, 16 March from 12-12 across two areas. The Main Stage will feature performances from Black Coffee, Âme (live), Bedouin, Chaim, Jon Charnis, and a b2b set between our very own Kimou and Aeden. The day’s second, Ocean Stage will be headed up by Kompakt‘s Blond:ish, alongside Greb Pidcock, Ravel Brothers, Tara Brooks, and Zach Walker.

Happy Bay Beach is one of the island’s best kept secrets, normally only accessible by foot or boat, but during SXM Festival this secluded stretch of azure water, golden sands and lush jungle will be transformed into an enchanted party paradise. 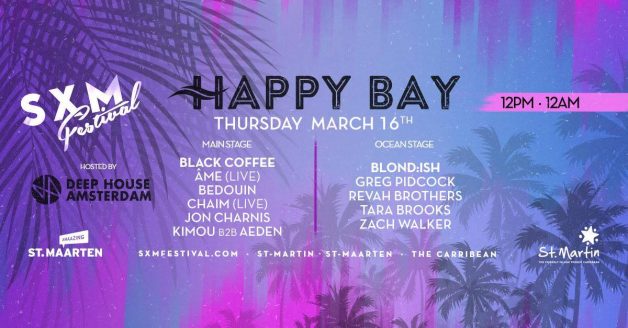