Ten Walls (aka Mario Basanov), the Lithuanian DJ/producer with the multitude of chart-topping hits under his belt like ‘Walking With Elephants’, has found himself in somewhat of a mess to say the least. This following some rather narrow-minded, even hurtful comments regarding the gay community on his personal Facebook page where he classified gays as “a different breed”. He later apologized for the statements and said they were a “misunderstanding”.

Ten Walls, real name Marijus Adomaitis, made the comments on his page on June 3rd, stating that “I remember producing music for one Lithuanian musician, who tried to wash my brain that I don’t need to be so conservative and intolerant about them”. Ten Walls replied to this particular musician “What would you do if you realized that your 16-year-old son’s browny is ripped by his boyfriend?” Well he was silent.” After which he gave a history lesson by saying that during “the good 90s… these people of different breed where fixed.”

He even ventured the anti-gay tirade into pedophile priest territory by saying “One of my first gigs in Ireland, on my way to [my] hotel I saw a church with a fence decorated with hundreds of baby shoes. Naturally I wondered why?”

“Unfortunately a priest’s lie for many years was uncovered when children were massively raped.

“Unfortunately the people of other breed continue to do it and everyone knows it but does nothing.”

The comments were later removed but of course the internet got a hold of it long before they were gone, and the day after Gay Star News started a crusade against the DJ. We’re keen to see how this story will influence his bookings. Fort Romeau has already cancelled his gig. The effect can also be seen in the comments on his recent Facebook posts. Ouch. 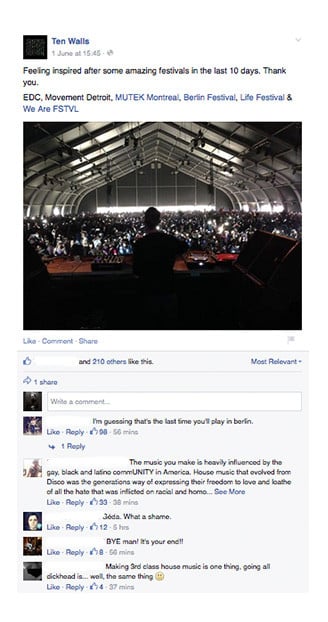 We do not hold any grudge against Ten Walls’ music, however, we find that it speaks for itself. That is why we will leave his recent Sparta EP on the 2nd place in our top 10 releases for May.