As we reported over the weekend, a pop up “ecstasy” shop opened in Amsterdam today, which was organised by the youth wing of the Young Democrats political party, D66.

As promised, the event was largely about awareness with no actual MDMA products sold. Rather, placebo pills of various colours, “effects,” and prices were on the menu as fundraising for the organisation. “We want to regulate and legalise MDMA.  At this moment, half a million people in the Netherlands use ecstasy and it is all underground“, said Young Democrats International Officer Milan Asseis. “We don’t want to look the other way and say repression is the best option because it just is not true.  If you look at Marijuana use, the Netherlands is by far the country without the most users.  This says that legalisation doesn’t mean people start using more of a drug. Legalisation creates less criminality, safer pills, and keeps the drug out of the hands of minors,” Assies continued.

Located in a snug Amsterdam alley at 10 Rosmarijnsteeg in the city’s centre, D66‘s XTC-Shop gathered activists, press, and curious onlookers at its 11am opening. The shop itself was rather bare-boned, with a handful of informational flyers, as well as clothing articles, scattered around. At its head was a booth where patrons could gain first hand awareness, as well as purchase their “pills”. “With this shop we want to address the issue to a broader public not just young people,” Assies confidently expressed. 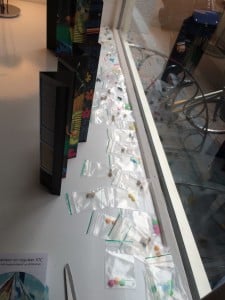 “If something isn’t prohibited, people think the state encourages its use. If the state doesn’t prohibit it then people will just use it more and more, creating all kinds of chaos along the way. This simply is not true,” Assies answered when discussing the initiative’s most common counter argument.

If you would like to get involved with D66 and SIGN THE MDMJA initiative, you can do so by clicking the link above. 40K public signatures are needed in order for the Dutch Parliament to address the issue. “We want to gather the signatures, discuss in parliament, and [eventually] have state owned shops that put safety and health at the forefront with a legal supply. This means pills are made by regulated producers in a regulated environment, assuring the pills are safe,” Assies answered when asked about the organisation’s ideal outcome.

Though some over eager Ecstasy enthusiasts may have ultimately been disappointed by the lack of “real” MDMA on hand, there is no doubt that issues of drug awareness and safety are paramount in a world increasingly subject to chemical dillutants, not to mention the inevitable quality reductions that occurs within free markets. As the United States has just begun a similar dialogue centered around Marijuana, the Netherlands remains ahead of the curve on issues of this nature, but the fight never ceases to bring safety and fairness to the masses. What do you think? Should MDMA products be legalised in Holland?