With well over 8 million views, Solomun’s Boiler Room session in Tulum, Mexico is one of the most popular to date. Only Carl Cox’s Ibiza takeover and Richie Hawtin (in Amsterdam) have more views. Thanks to the success of this video, the Bosnian DJ and relative newcomer now shares a podium with two dance music legends. Its fair to say that Solomun’s set is pretty flawless but as the endless stream of YouTube comments below suggest; there is something else going on here.

Pause the video at almost any point and you see a scene that resembles a bacchanalian version of Da Vinci’s Last Supper with all the apostles transformed into attractive women in beach wear. Solomun plays dead pan saviour. As martinmest puts it; “this video has so many characters and subplots, it’s like a Shakespearean tragedy”. This comment has 1615 likes and triggers the rest of YouTube to begin decoding the plot. We thought it only right to weigh in and give you the complete script.

Didar Ahmed’ notes; “It’s like the dude from Hangover DJing and killing it :-)”. Other comments make the argument we should be just listening to the music, like rokeeffe91 who asks; “people actually watch the set? i keep it playing on the background… what are people talking about?” Still there’s no denying Boiler Room’s success lies in being able to watch the scene unfold. As Cameron Coffman puts it; “It’s official. Boiler Room is now a reality television show.”

Solomun – Our protagonist.
Boiler Room Guy – This character intros the drama like a shakespearean narrator.
Solomun’s Mate – One of a few other male characters. He is our protagonists caregiver.
White Shirt and Earplugs Guy – The watcher character who often seems critical.

In fact Kenneth Demeester has an interesting reading on this character; “I think the guy in the white shirt did it …”

Wacky Arm Waving Woman – This jester character offers the much needed comic light relief.
Amateur Photographer – self explanatory.
The Hat – YouTube offered many less flattering names for this one but we see her as a misunderstood lover archetype.
Morpheus – Hat’s Sidekick, representing her moral compass which she ultimately abandons.
The Sage – Overwhelmed by a greater understanding.
Magdalena – Solomun’s sister
White Shirt Woman – YouTube’s favourite
“Christoph Waltz” – YouTube’s words not ours
The Sirens – a group of girls who dominate roam the crowd including “Lorietta and Maria”
Men in Black – Friends who come to the rescue.
HOSH – HOSH

Act One – Setting the scene 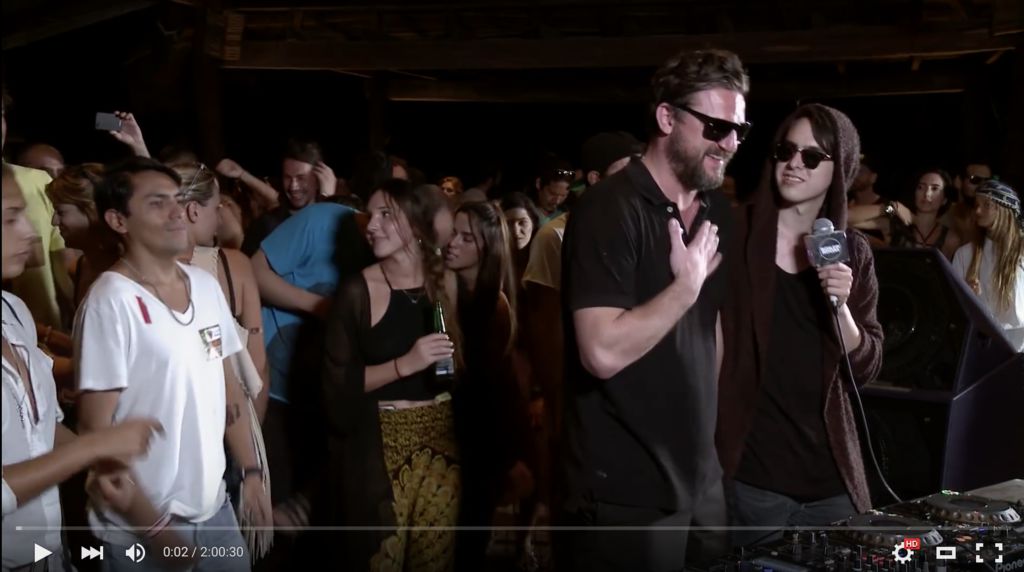 Solomon is introduced and opens with International Pony’s Our House (Solomun Intro). Like most great tales this one takes a while before it really grips you.
Although MC Drex does note the first “mini saga: lorietta and maria light up. blond chick with hat looks on with annoyance/jealousy”. Tension is mounting… 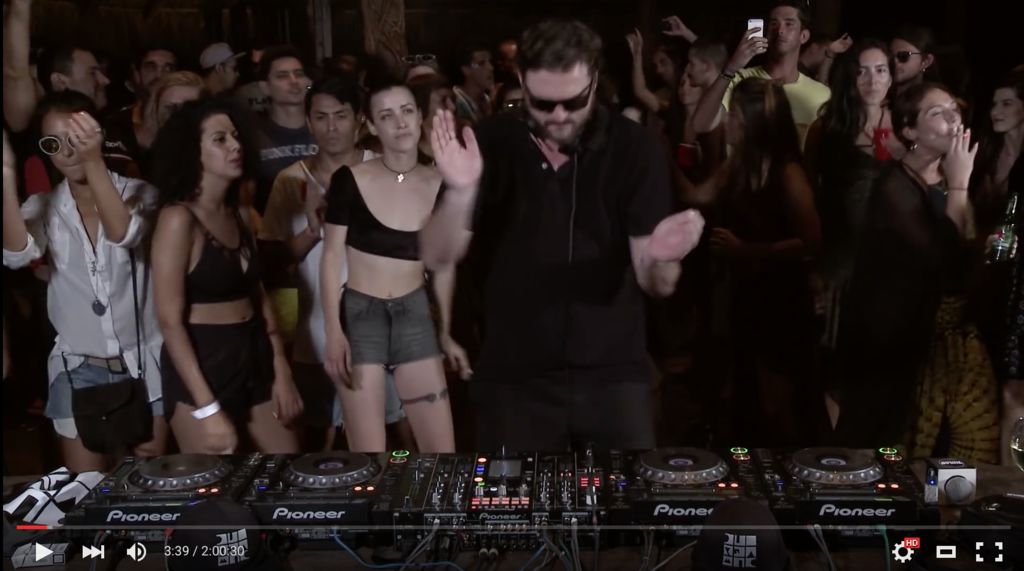 Our Amateur Photographer in day glow t-shirt decides to film the back of everybody heads. White Shirt and Earplugs Guy does not look impressed. 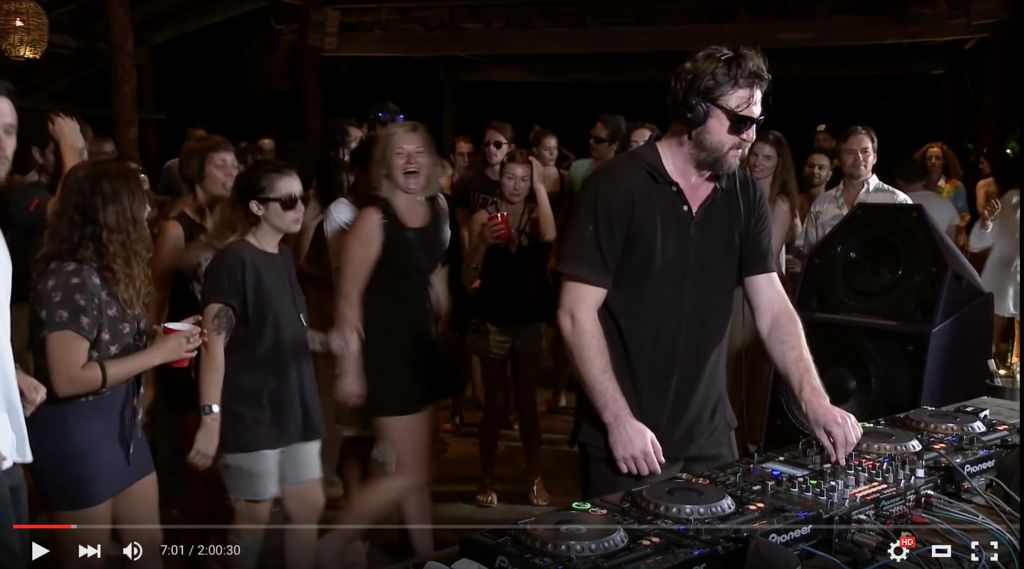 Wacky Arm Waving Blonde Woman makes a cheeky dash to the front of the crowd looking completely unapologetic. This character is constantly attempting to lighten the mood but is all too often unsuccessful. 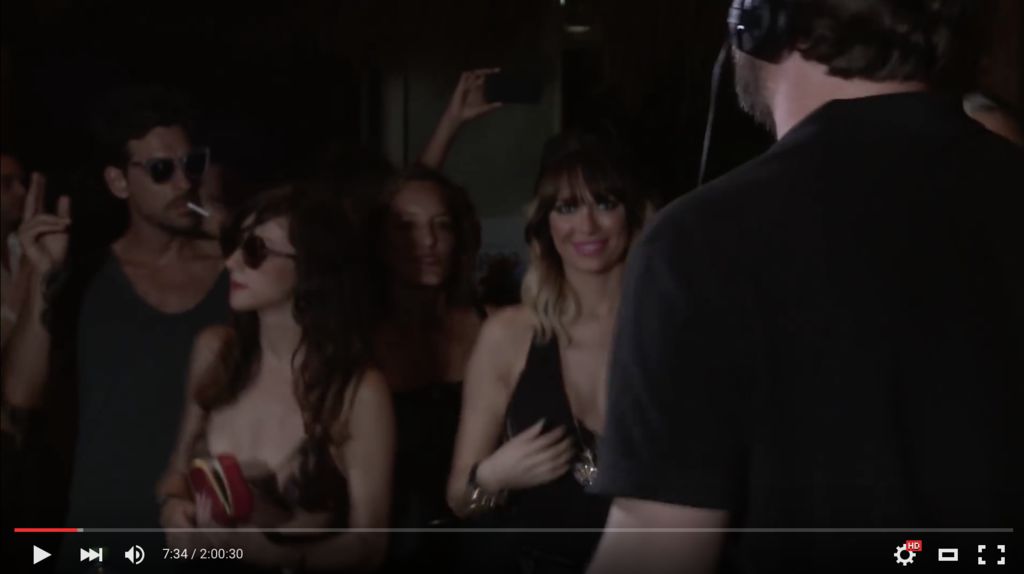 We are introduced to Solomun’s admirer The Hat and we see her making the first of many attempts at communicating with our protagonist. Shortly after we see Morpheus trying to tell her it’s a bad idea by giving a dismissive head-shake but The Hat is unfazed.

At this point the green waters of the nearby ocean ripple across the screen. Solomun takes a couple of gulps of wine and takes a moment to contemplate. The look on his face suggests he perhaps has an inkling that drama is around the corner. The subtle simmering groove of Night Talk’s Gamma captures the rising tension perfectly. 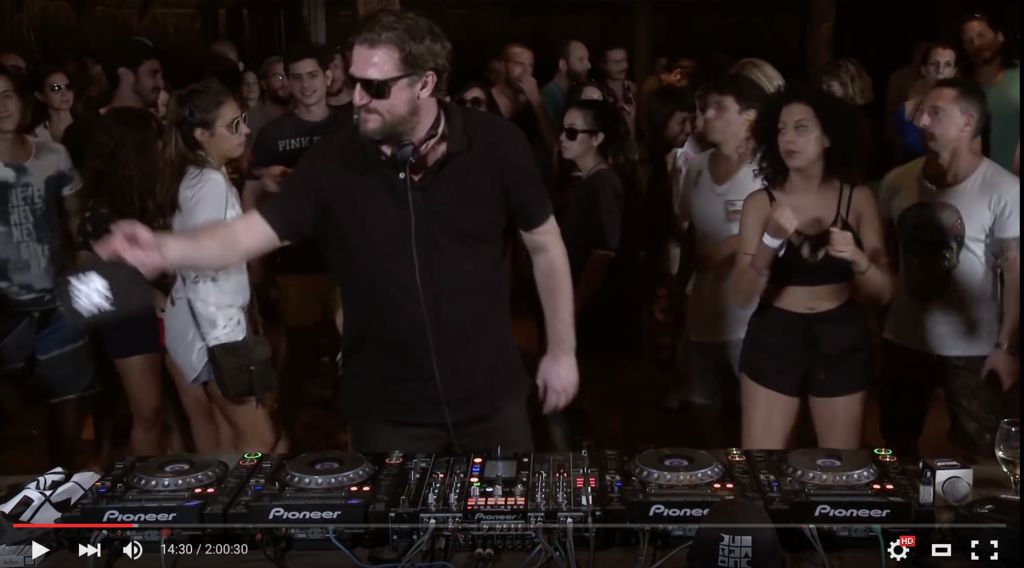 Solomun’s character is both creator and enabler. We see his generous nature here as he offers someone out of shot a hat from his private collection. Then almost immediately we see Morpheus laughing at the person to his side once again as it is revealed…

The Hat is in fact the recipient (surprise!). So whilst we the audience don’t get to witness the moment, we are lead to believe that there has been some kind of successful interaction. Soon after she is seen throwing down her belongings and moving to centre stage as she clearly feels encouraged by the gift. 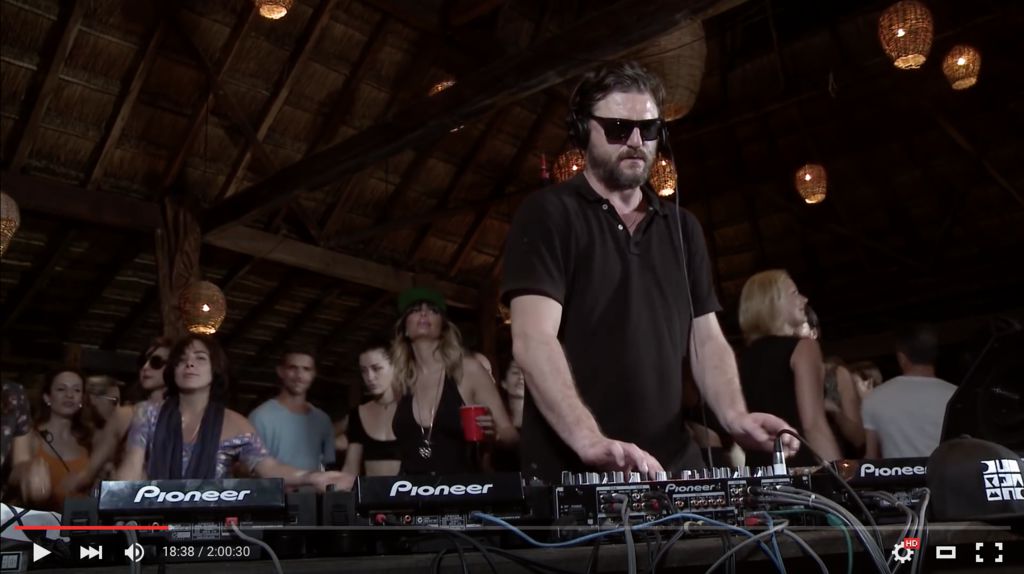 A new character seems to sprout out of the ground and begins explaining a concept to the woman next to her. The woman seems unmoved by the story, the character telling the tale seems to find the whole situation very difficult to put in words. This character is the Sage and she seems to be the only character who grasps the true depth of the situation, responding heavily to both the music and the narrative as a whole. As Ryan MacLean observes; “girl to the left in purple is FEELING it lol”

Meanwhile on the other side of the screen we see Wacky Arm Waving Woman making light of the situation by waving her arms.

The screen is overlaid with the image of the lamps dangling from the roof above. Could this be a metaphor for the characters themselves, perpetually dangling in space. 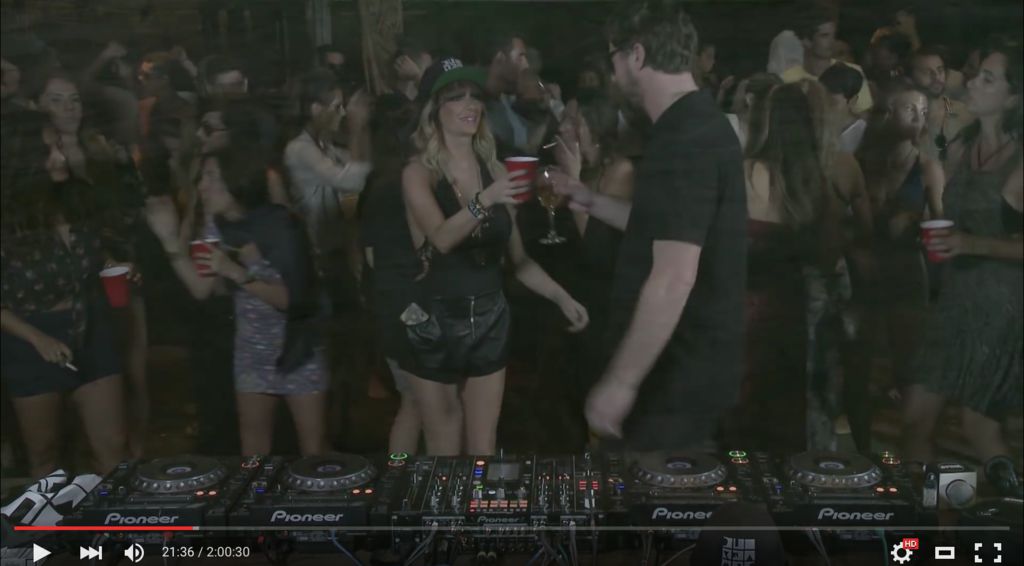 The Hat plucks up the courage to cheers the man himself. At this stage Solomun is happy to oblige.

Our Amateur Photographer in the day glow tee, once again filming the backs of everybody heads.

As Kollektiv Turmtasse’s “Sorry I Am Late” is dropped we suddenly notice an almost complete switch of characters in the foreground. A man in short shorts pulls of some fantastic dance moves which are greeted with approval from the new crowd. Unfortunately this is the last we see of him. 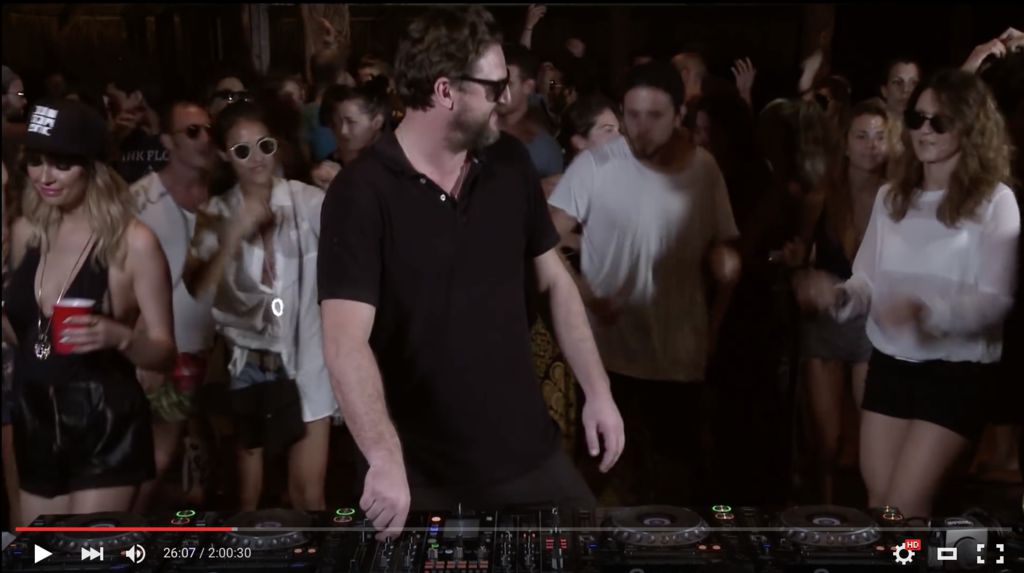 Solomun’s sister Magdalena makes an entrance. The Hat goes over to have a word, perhaps trying to seek some kind of approval.

Around a minute later Jim V notes; “Side tit ho spills drink….” (Side tit ho referring to The Hat). She makes a lucky escape as no one notices and the drink misses the decks by a millimetres. We can’t help but wonder what could of been if this drink spillage had occurred slightly differently and we can see in The Hat’s expression that she is thinking the same thing.

Next comes one of the crowning moments, spotted by Inglourious Baxterd. Solomun and Magdalena somehow manage to telepathically synchronise their dance moves without looking at each other. Synchronization between Solomun and magdalena( White shirt), THE BETCH IN the left has no chance.

“He is crazy about his wife.” Pretty sure Solomun isn’t married to his sister but the fact remains, their connection is strong and The Hat is jealous. 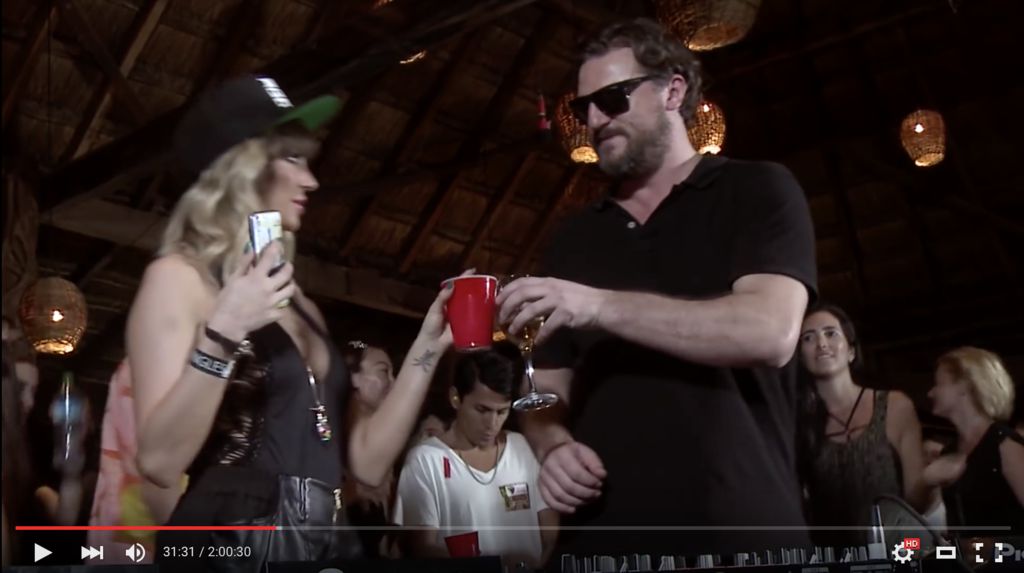 Still not willing to give up, The Hat goes in for her second cheers with the man himself. This one feels more sincere and she seems pleased. Although vdub would not agree; “31:30 Cheers 31:35 Ok, now fuck off”. lsdinc also eloquently notes; “such side boob tho!!! Oh the side boob!!!! Can’t dance for shit tho too…. but the side boob………..” to which Ian Marshall retorts; “You callin Solomun a tit bro ?”

After plucking up all of her courage The Hat reaches out and attempts to make conversation with Solomun. Maybe it is the noise in the venue or his dedication to his beautiful jazz hand moves but Solomun’s reaction is pretty underwhelming. He is clearly running out of patience. 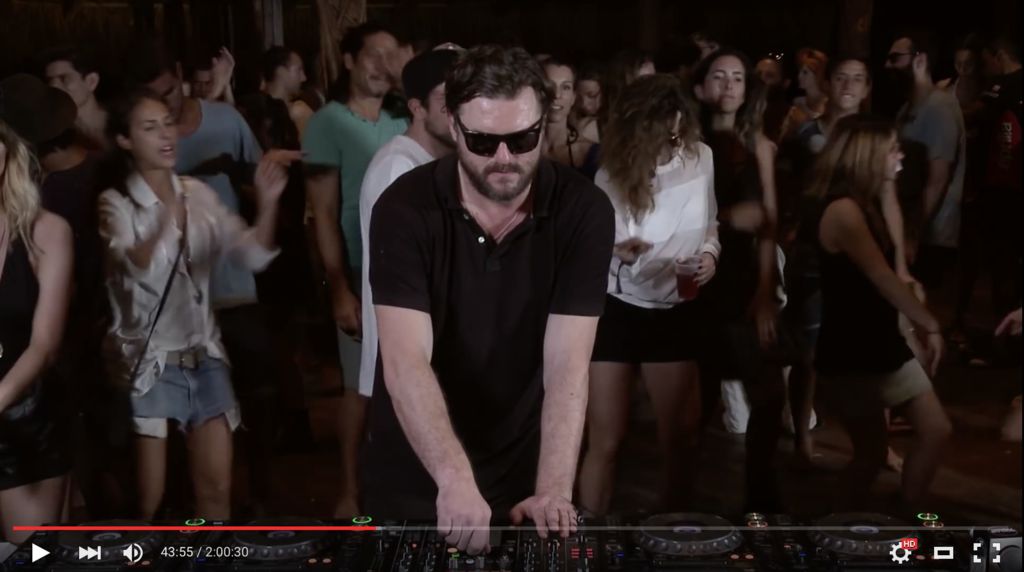 The White Shirt Woman knows the lyrics to Alix Alvarez’ track Fayall almost perfectly. Incidentally she is also the character who many of the YouTube community seem to be in love with.

Just as the tension is building, we are graced with some light relief. One of the Sirens notice that Solomun is wearing one shoe and points it out to her other two companions. This is a small joke that we the audience share with the Sirens. 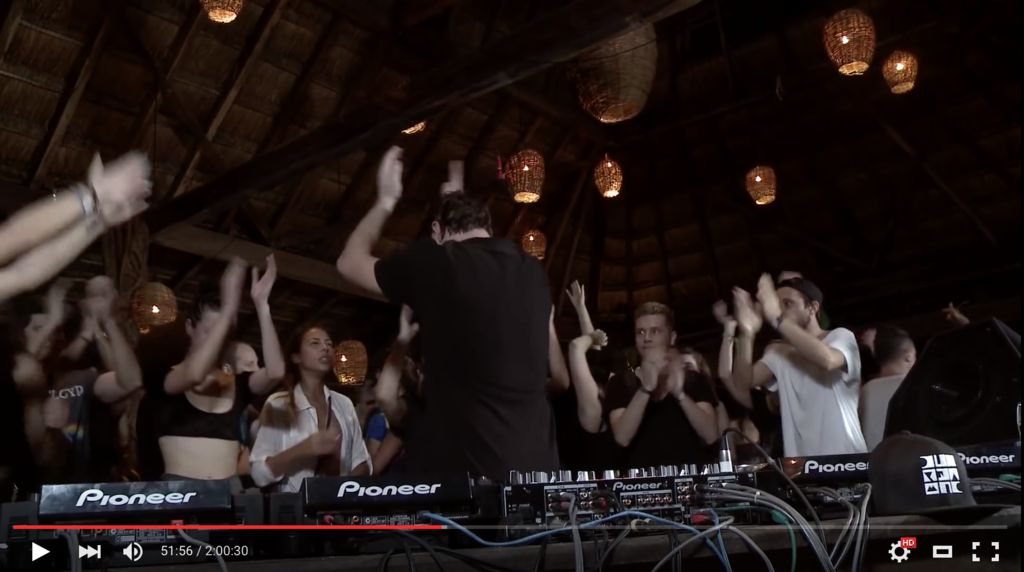 As we near the halfway mark, Solomun turns towards the crowd, clapping his hands as if to say thank you. Veerus & Maxie Devine’s My Train reaches it’s euphoric peak.

The Men in Black arrive and Solomun greets them with hugs, clearly happy to see someone from his team.