“My house is your house” – states the mantra of the music we love. But what house are we living in in the real world? Dance music, in its purest form, comes with an embedded message of unity, acceptance and tolerance. But on the other hand, it is also a church of escapism and hedonistic ‘carpe diem’ – pretty much synonymous with the indulgence of state-of-mind enhancing substances. But does it step further than that? To the communities, societies we live in? And can DJs be the catalyst for change? (should they be?).

In this list we present the dance music artists that, at least in our view, are known for being politically outspoken or socially active. We want to highlight some of the ways they have expressed themselves in relation to their music scene as well as the message they stand behind or the issue they boldly confront. We refrained to a ranking here, as aiming to impact by either actions or ideas is an issue too abstract to measure. Furthermore, this list is not meant to be exhaustive. We call everyone to add to this list in naming more and other artists, for their work and ideas to be noticed. For one thing is sure, this is a list of world class kick ass DJ’s.

Openly punk, widely known as the ‘baron of techno’ Dave Clarke has the issue ownership of vawing the flag of anarchy against the EDM establishment. Not everyone deserves a place on the stage and Clarke relentlessly makes it clear as day. “What most upsets me about EDM is that they’ve completely forgotten the roots,” he commented. “People like Hawtin, people like Guetta, in a way they are kind of like Isis in Palmyra, destroying everything that came before to suit their own needs.”

He does not miss an opportunity to communicate that, neither he did this ADE with a sign on his T-shirt, saying… well see it for yourselves. 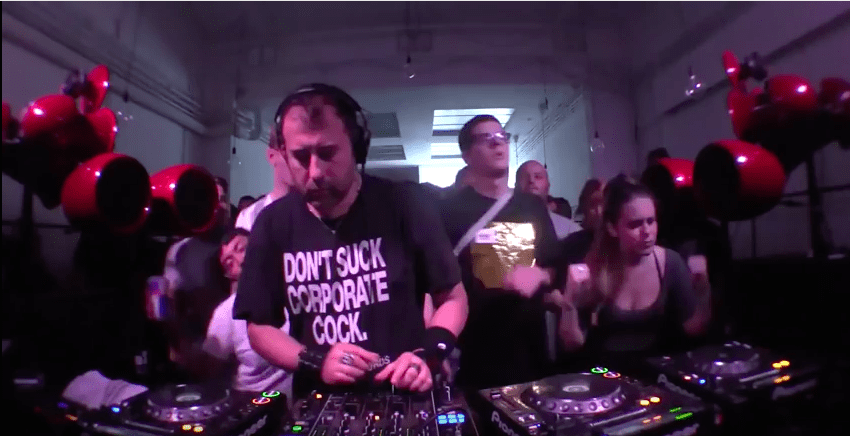 Dave Clarke: “House was always about a slow build-up of drums taking you somewhere. With EDM it’s not about taking you anywhere, it’s about telling everyone what a great time you’re having. But are you really having a great time?” 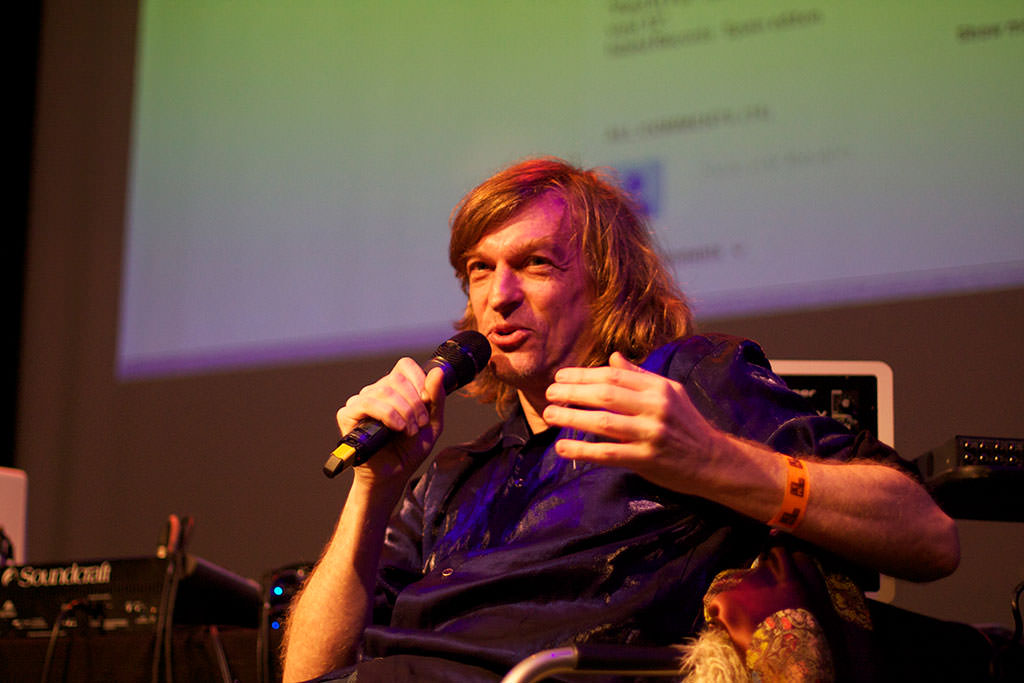 Mp3 over vinyl is not the only philosophy on sustainability put in action that this man has embraced. Matt Black is half of Coldcut, a legendary DJ duo and a multimedia pop group from England, which grew into one of the most influential record labels: Ninja Tune. Keeping a rebellious stance against the mainstream, staying ever independent, Ninja Tune has lasted and celebrated 25 years in the game in 2015. Throughout his career and artistic life, Matt Black has explored many avenues of activism, advocacy, inspiration, and collaboration; all of which circle around the topic of climate change, environmental protection, and social justice from different angles.

Black believes strongly that an artist’s role is commenting on human consciousness, being the catalyst towards change. Talking about this switch of electronic music towards a cause, he was one of the main speakers on this year’s ADE green. His works done on the issue vary from the philosophy of sustainability adapted in his own business, his creative projects, such as environmental videos and games, collaboration with Green Peace and general activism. Matt even looks at sampling as a form of recycling, he expresses his preference of MP3 against vinyl and talks how to share philosophies and attract others to it.

Matt Black: “We can keep on using the term raising awareness but unless we change our behaviour it doesn’t really mean much.”

Batida’s artistic expression spans even further than the previous two artists. From philosophising of where music stands and, contrary to the other musicians mentioned previously, is rounded with very clear goals and messages that are echoing all throughout his creative work.

Being raised in the suburbs of Lisbon, Portugal but drawing on his birthplace Huambo, Angola, Batida (real name Pedro Coquenão) became an active voice and mind for an evolved and more equal Angolan society – an aspect revealed by Coquenão throughout the years as a radio DJ, documentary director and a musician. The inspiration for his music, that is a blend of electronic and traditional Angolan sounds, is drawn from nothing else but his routes of Angola. Thus, when sixteen young Angolan activists were detained, he used his social media, co-organised demonstrations and even displayed billboards with their faces onstage.

Thus Batida’s can be seen as an example of a musician who is not hesitant to use his music and his position in the centre of attention to push out a politically loaded message. An excersise of freedom, which he performs in his art, that as he claims is not interventional per se. It transforms for being free, provocative and different.

Batida: “I prefer movement being less literary and more sensible. I believe in the power of dancing, in physical expressions, in the sound’s vibration and having people on the dance floor. I think that transforms better than long speeches, which follow rules in order to achieve their objectives.”

More about his cause here. 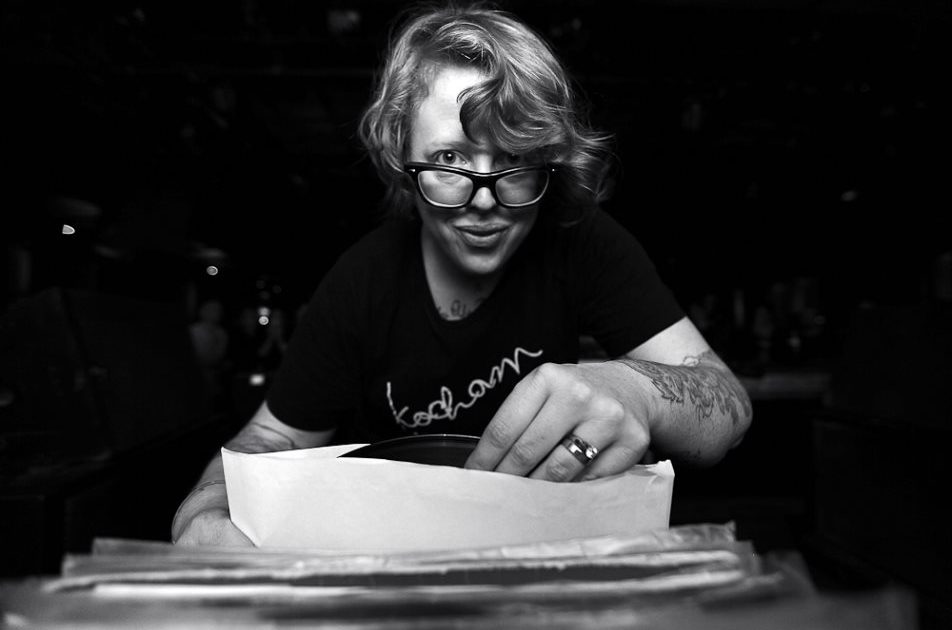 When the rant of (and soon revolving around) Ten Walls came up, Marea Stamper, aka The Black Madonna, was one of the first who pointed to the tolerance and solidarity that house music preaches: “If dance music isn’t about taking too god damned much ecstasy and becoming heteroflexible and completely cool with it, I don’t know what is.”

The chief talent buyer at Chicago’s Smart Bar is a vocal feminist and advocate for the gay community. Her interviews, radio appearances and especially her online presence is saturated with messages circling around solidarity and tolerance. Her latest project spans further from tweeting. It is “A Women’s Movement in Dance Music,” a party series named after both BBC pioneer Daphne Oram and the Greek naiad Daphne. The March program features workshops and talks on topics from negotiating motherhood to working with synthesizers, as well as club nights headlined by female DJs.

The Black Madonna: “How long are we going to be breaking through? We’ve been breaking through for 30 years. That’s not to say there wasn’t a period in the early days when there truly were very few women in certain areas of dance music, but certainly the woman as that central figure of a DJ was something that people like Teri Bristol and Psycho Bitch broke early.”