An artist must always be in movement, questioning reality, moving further beyond the the comfort zone. The higher one gets, the more relevant one’s success is; the more incessantly one must ask themselves, “How can we continue to improve?” Only in this way can we truly evolve.

With Coyu‘s Suara imprint, it ha been a label with historical relevance yet didn’t have “its own” sound. Everything from Deep House, House, Tech House, Progressive House or Techno would make its way to audiences; Dance Music at the service of the dance floor where the balance was always between the quality of music and sales. Suara broke the unwritten rule of successful labels characterized by not leaving the lane of their usual style, by editing music from many different styles. For this reason, it was easy to be in the Beatport charts with about Forty songs across multiple genres.

By 2016 Suara became the non-EDM label with the highest sales volume on Beatport. Overall, it was only surpassed by Spinnin’. By then, the fall of EDM was on the horizon, undertaking a forward flight towards what would later be eaten, the genre in which Suara was # 1 in outstanding sales, Tech House – a genre from which Coyu had been progressively distanced himself. Although generating a spectacular volume of sales, Coyu has since decided that Suara could not continue in this way. With that, and regardless of consequences, Coyu took to twitter to explain the newfound evolution of the Suara sound:

I had two options: continue doing the same, disgusted but knowing that we would continue to be very successful, or change, risk and change direction to unexplored lands but in something I believe could lead to happiness. I chose the second. Not because I’m a lover of adventu… pic.twitter.com/IH6t0RoOok

Now, with several new releases out and in the pipeline, Coyu also brings his own personal thoughts on the evolution of Suara with this personal statement covering his mindset behind the change and focus:

A New Me: The Coyu Of Always!

“I’ve been working intermittently for 6 years on my first album. If I had not set a more or less concrete date (sometime next 2018), it would possibly never see the light. I make and edit a lot of music throughout the year but it costs me a lot to make it fit into my personal conception of what an LP should be. That’s why I have never known what kind of subjects would appear in it. However, what I’ve always had clear, even before thinking about the possibility of editing one, is that it would be titled “Eclectic”.

If I had to describe myself as a DJ, producer and, above all, as a clubber and lover of electronic music, it is that, eclectic. In only a few phases of my life have I been musical monogamous. Even in the years when minimalist techno was my religion, Sakho and Basic Channel the Bible and Plastikman, Jeff Mills, Moritz VonOswald and Mika Vainio his apostles, winked at house, acid, IDM or EBM. A club -Nitsa- and the Barcelona DJs Fra, Marc Piñol, Angel Molina, Zero, Sideral and Undo are very much responsible for that. One is what he dances, and I, as a post-adolescent, destroyed many pairs of sneakers on the Apolo club’s dancefloor to the sound of the wide range of sounds of my favorite DJs, always locals. As it happens, just at the moment when I decided to edit my first album after so many years, I began to question whether the title was appropriate. That adjective that described me better than any other has ceased to be valid.

My characteristic musical polygamy is no longer such, and my love for eclecticism has given way to that style that upon reaching adulthood I fell in love with such a madness that I made it my passion, my job and my life: TECHNO. Anyone who has listened to my sets lately will have noticed. I vary slightly depending on where and when I perform, but the base is techno. My productions also go in the same direction. It’s not the same to remix Giorgia Angiuli, DJ Hell or Super Flu, but everything I produce is Techno. And, as it could not be otherwise, something similar is happening with Suara, although in this case the change has been to stop editing Tech House and to focus on more underground music, regardless of the genre we edit. The conclusion is that I no longer play so many styles, but the ones I play fill me up completely. I feel happier I feel more creative I feel more accomplished. In short, I feel much more myself. Welcome to the new Coyu, the Coyu of always.” 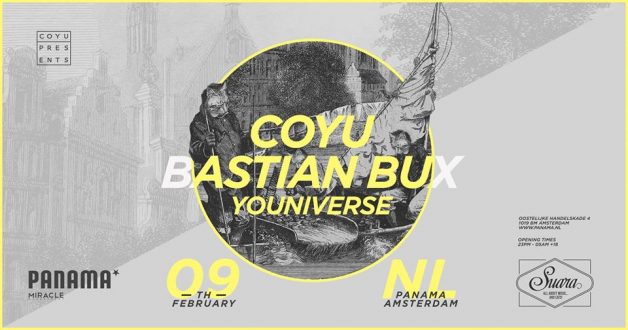