Lee Foss’s rise to the top was a swift one. The American DJ came up on a wave of creamy house goodness thanks to his label Hot Creations and associated live act, Hot Natured, with Jamie Jones.

The brand held parties all over the world from Ibiza to Miami and made Foss a household name. Now he is doing his own thing once more with labels like Emerald City and Repopulate Mars and also has a debut album planned for later in the year. Ahead of that he will play for Audiowhore’s 6th Birthday on the 18th March, so we sat down to have a quick chat about all this and more.

How are you, how has 2017 been so far? Whats has been good and bad?
2017 has been a really great year so far… my debut album is coming up April 7th and that’s exciting for me and have been working on some other collaborations with Anabel Englund, detlef, Lee Curtiss, and a hip hop artist from Chicago I signed named Ill. Its been cool to branch out and work on music in another genre.

Traveling has been heavy so far but I spent the whole of January in Brazil, Agentina, Mexico, Turks + Caicos, and Miami so I can’t complain. Lots of great shows so far this year and also setting a weekend here and there aside for myself has been a nice formula.

My labels have all been doing great, I feel like Hot Creations, Emerald City, and Repopulate Mars are all really hitting their stride.

I can’t say much has been bad for me other than the politics which segues to your later question.

Do you have hopes, goals and dreams for the year ahead? Do you plan and make goals like that? Anything you really want to achieve?
I hope my album is well received, and I’m very excited for some of the collaborations coming up I’m working on… there are some great tracks coming from me this summer. I try to keep my goals simple; to create, sign, and play the best music I can and the rest usually takes care of itself.

My girlfriend has a really funny character she does, I’d like to make a mini cartoon of that later this year haha.

Down the road I’d love to own a restaurant, cooking is a favorite hobby of mine, and maybe release an art book of my poetry/lyric writing.

How is the Re Populate Mars label going, any releases coming up we should know about?
I’m really stunned how quickly it’s grown, obviously Detlef’s ep was huge for the label but there have been a lot of other really strong releases… I’m constantly slammed with demos for Repopulate Mars now on top of the demos I’m getting for hot creations and emerald city, its definitely become more than a pet project…

there’s a great miami VA ep this month with eps coming from, Mirko Di Florio, a couple from Mihalis Safras, Latmun, Demarzo, an album from James Curd + Diz… and too much more to mention.

How much time do you spend working on the label and A&Ring?
I definitely have to devote time everyday to Hot Creations, Emerald City, and Repopulate Mars… since it’s just me doing Repopulate Mars and I still do the payouts and organise the art etc myself that takes a bit longer but they all require my attention…

My guess is at least an hour goes into that most days but sometimes obviously much more.

Is it important for you to have time off, away from making music and from partying, in order to stay inspired and healthy in mind and body?
I don’t know how important it is to have time off from making music but yes being away from parties and partying during the week eventually becomes a must if you are in music for the long haul and want to have a healthy balanced life…

I couldn’t be happier these days, I’m in LA most of the time during the week, I get up early 6/7 am go to the gym in the morning answer some emails, swim… work on music, have a nice dinner, go to bed early. I love having a regular sleep schedule for the first time in my adult life… I’m in parties for a living so I don’t have fomo…

I’ve become a bit of a health nut which is great because then I don’t have to beat myself up about how I eat at airports or if i’m in parties on the weekends for work.

What is it like to be an American right now – what are your views on Trump?
It’s like watching a car crash and then realising it was an out of body experience and that it was your car crash.

He’s more or less a worst case scenario in regards to almost all policy.

Do you think political views from musicians and DJs are ok and important?
Well, I mean those are two different questions, of course its ok for a DJ/musician to have political views… why shouldn’t they?

Are they important? Well, I think an entertainers political views can be valuable to a fan if they see that the performer is eloquent about why they have their political views and you can see that the entertainer pays attention and is knowledgable on the subject… then absolutely yes their view is important if it reaches a lot of people. if they don’t know anything about it then I can see why people would think they were just spouting off.

You play the Audiowhore 6th Birthday soon in London – what should people expect? What will you plan, anything special for the occasion?
I never plan sets but expect pumpy space jam suitable for cyborgs getting down next to punk funk kids 🙂 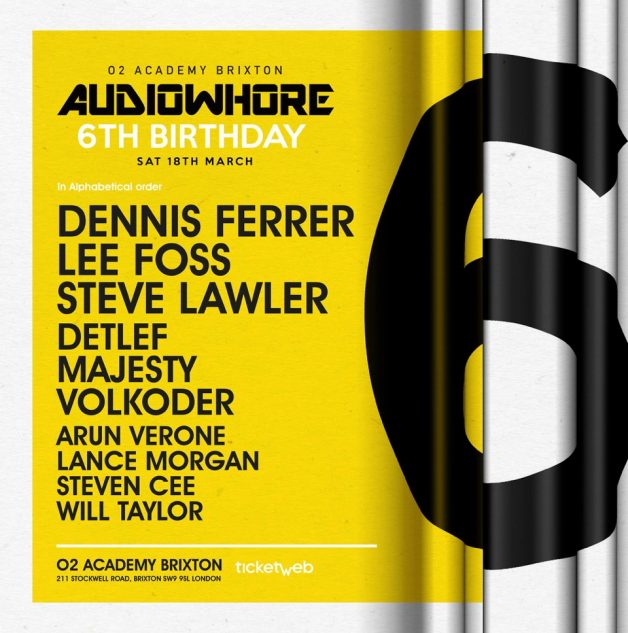