Axwell’s Axtone Records is to host their first ever label residency in Ibiza at Tox Club. It happens two Mondays a month from June until September with DJs such as D.O.D., Chocolate Puma, Deniz Koyu, Kryder b2b Tom Staar, Cat Dealers, Cedric Gervais, Arty and more. Get your tickets now at https://toxibiza.com/axtone.

Tox Club is a venue operated by Pacha that offers underground nights across a range of genres. It is a cosy, personal space with world class sound, golden walls and a giant disco ball all ready and waiting to become a party cauldron.

Axtone Records started life in 2005 as an imprint to release Axwell’s own material and in recent years expanded to a wider musical universe. It has a fresh sound with quality house music from all around the globe, and that will be represented at each of these events.

Say the label, “We’re delighted to have found our Ibiza home for the summer at Destino’s not-so-secret enclave, Tox where we’ll be bringing a host of Axtone Family favourite DJ’s both established and fresh to the White Isle.”

This is a rare chance to catch some of house music’s finest in an up close and personal setting. Do not miss. 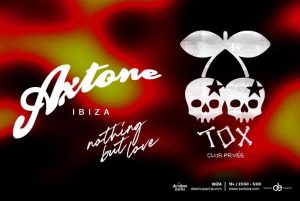