On Sunday 11th October, Chase The Compass and Cubed host a Rugby World Cup party with a difference at London’s iconic Old Street Roundabout. DJs from 8 of the World Cup nations will be spinning disco tunes for 8 hours, while on the big screen, the last round of group matches in this year’s Rugby World Cup take place.

Soundtracking the whole event is a totally unique selection of DJs, called to this sporting show down by their nations badge and a unified love of disco. Having released on Kitsuné and Future Classic as part of duo The Swiss, Luke Million joins all the way from Australia, bringing his bag of funked up, neon sounds. He’ll be going back-to-back with a very special, secret guest with releases on Blasé Boys and Days Of Being Wild, so expect there to be fireworks of both a musical and sporting kind. Italian house don Stefano Ritteri will provide a dynamic, inspiring hand in testing times for the Azzurri, while the British and Irish Lions are formed of Earl Grey, Kipp$, Holmes Price, and Discordance. CTC’s very own Frank McWeeny goes back-to-back with Oshi representing the Cockerels, with the lineup rounded off by cool as you like South African Matt Prehn.

With a location right at the heart of Old Street, The Magic Roundabout will be serving up delicious burgers courtesy of Burger Bear, bold sea food concoctions by Prawnography, and a dazzling selection of cocktails and craft beers from bar Relax. On the big screen France and Ireland look set to be battling it out for top spot in Pool D from 4:45pm, while this World Cup’s surprise package Japan go head to head with the struggling USA at 8:00pm. 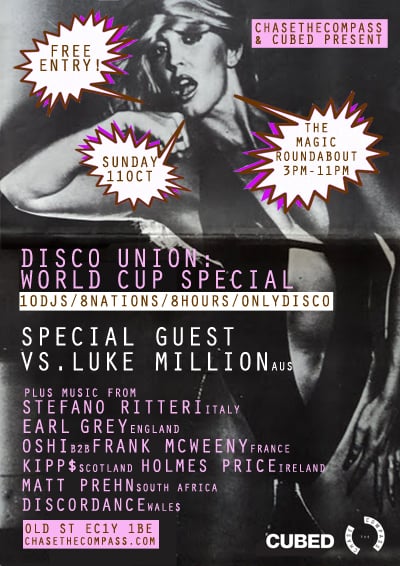