After more than a decade’s successful career, Tim Green has recently brought his debut album to Cocoon Recordings.

Composed like an electronic soundtrack to a romantic film, “Her Future Ghost” shows the talented producer pushing himself to fulfil his creative potential. After 10 years of touring around the world with Sven Vath, Cocoon, or on his own, as well as having his releases felt by way of Get Weird, Cityfox, Dirtybird and Get Physical, Tim Green’s latest should just the beginning of a new and exciting chapter of Green’s career.

Here, with the album out, we discuss everything about its creation from the original creative seed to its artwork via Pink Floyd collaborator Ahmed Emad Eldin.

“It’s a huge relief when you have worked so long on something to finally come out and basically be finished.”

You debut album has just dropped, congrats! Can you tell us what was the starting point of this project? At what point over your career (the past few years) did you plant the seed for the album? What were its origins?
Yes, it was a couple of starting points. Firstly, Cocoon had been asking for a while if I would be interested in releasing an album with them. I was always hesitant on my side as I did not want to do an album full of just dance floor tracks for DJs that was not connected cohesively. I wanted to do something special for Cocoon. So, I needed a concept for it and a good direction. I finally came up with this film soundtrack concept – which really ignited my imagination. Incidentally just prior, I had already written a couple of tracks which were very cinematic. These tracks were the catalyst for the story and rest of the tracks on the album.

The album’s title “Her Future Ghost” elicits supernatural imagery, but was that your motivation behind the title, or was it something more personal?
Yes, it’s a reference to the characters’ story and journey for this nonexistent film.

The album comes way via Cocoon, an imprint of which you have had a rich and solid history. Explain the creative environment at Cocoon and how was the process with the label in bringing this project to life?
Well most importantly they are really understanding, patient and accommodating to work with. They had suggested to me a few times to write an album for them, but were always patient and understood my worries about wanting to make it special. Once I found a concept and said I was ready to do an album for them, they were still incredibly patient; I didn’t actually play them any music until about six months down the line. Which must have been pretty annoying (sorry guys!). But my reasoning was because I had such a vivid idea for the album, I didn’t want to play them half-finished ideas that might not make sense. I wanted to deliver the music as near to completion as possible, so they knew what I was trying to achieve.

You describe the album as an electronic soundtrack to a feature film. As I am a film buff myself, and once upon a time existed in that world before music, what are some films that may have inspired this album?
I feel like this nonexistent film I’ve loosely thought up is a bit of an epic journey type affair, but also essentially a love story. Some of my favourite films are love stories, but ones that are not cheesy and with an obvious ending (although nothing wrong with a cheesy movie every now and then). Eternal Sunshine Of The Spotless Mind for example is one of my favourites. It’s such an amazing love story with a very different twist and story. Then on the epic side of things, Christopher Nolan is one of my favourite directors. He’s not afraid to try doing epic movies. Interstellar and Inception are great examples of this. Just amazing journeys in both these movies.

In terms of constructing a soundtrack, how did you approach the construction of this album? What is the narrative here and how many versions of the track list did it take before coming to the final one?
It really started as a couple of tracks in the beginning as the catalyst. Then two became three. Which were eventually tracks 03, 04 and 05 on the album. Then very quickly I knew how I wanted the narrative and arc of the album to be. It became like doing a jigsaw puzzle – I could see the shapes and positions of each piece to fill the album and where they should go. I then just had to write the songs to match the journey of the characters and create the story.

Do you feel like film scoring is something you aspire to do in the future?
Yes definitely, I would love to. Although I can’t tell if I would be any good at it. The obvious pressures are huge in this world, usually with very tight deadlines. I think I would love to do it, but not as a living, and only work on films I love personally, so that I can actually connect with it and ultimately write the best music for it. Then in turn hopefully from this find a director that I can work with on a regular basis and work as a pair. Where you both share similar visions and can relax more knowing that you’re generally going to be hitting in the right ballpark.

A dual single of Echo/ They Want Us To Fall Down preceded the album. Why are these tracks the right stand-alone representation of the album?
Firstly because Echo was one of the first tracks I wrote and the catalyst for the album. It really set the tone of the album for myself and I think is a pivotal part in the album. Also to be honest, these are the two tracks that are the most dance floor friendly on the album. So from a DJ point of view, I wanted to have these tracks out there for DJs to play. As I always intended to have tracks on the album that were dance floor friendly. But at the same time very musical and unique. I think to be honest that always has and always will be my goal for my music, not just for the album.

Describe the cover art (which I love), which comes as collaboration with Egyptian artist Ahmed Emad Eldin. How did this collaboration come about? How were you first introduced? What was it about his visual style that drew you in?
I have been a fan of his for a long time now. I can’t remember when I first found him. But I love a lot of modern art and am constantly finding stuff I like. I can’t proclaim I know what I’m talking about when it comes to visual art, but I know what I like and don’t like at least. But I think I was following him on the website Deviant Art for quite some time. Whilst doing the album his work was always inspiring me, so when it came to needing some artwork, I instantly thought of using him. I just contacted him one day on facebook I think, told him my album concept and sent him the music. He was really into the idea and happily wanted to work together. I absolutely love what he has done; I am so honoured to have him do the artwork. The piece works so perfectly with the album title as well.

How do you plan on bringing the visual style on the road to upcoming gigs in support of the album? Finally, what are you particularly looking forward to in the coming months? This can be personal or professional…
I’m working on a lot of projects right now, some that I can’t divulge. But I’m really looking forward to finally releasing them into the world. It’s a huge relief when you have worked so long on something to finally come out and basically be finished. You can’t go back and change anything anymore – no more tweaking! So it’s a huge relief and a lot of joy. Just like with my album just being released. It’s such a fun time and a nice weight off my shoulders simultaneously.

“Her Future Ghost” is NOW AVAILABLE on Cocoon Recordings BUY 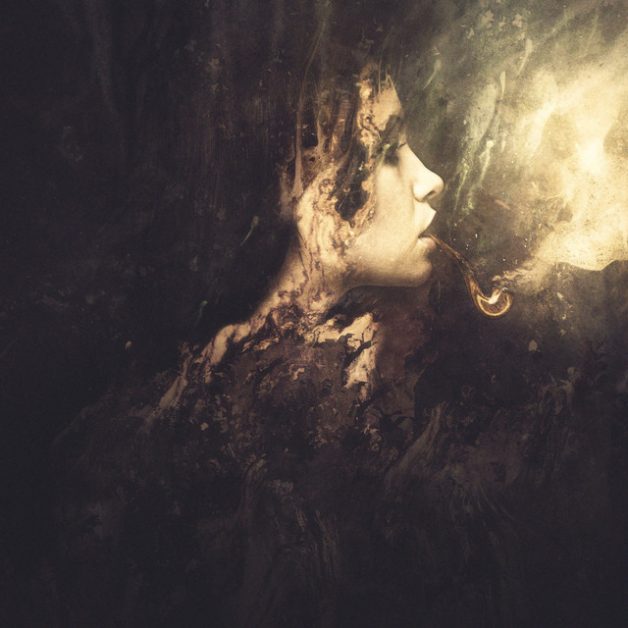