The Groove Cruise is the biggest and best way to sail the seas. This year’s is even more spectacular than ever and it sails from Port Canaveral’s Space Coast to Labadee’s Private Paradise from January 20th to 24th.

As always there will be 96 hours non stop music as well as a wealth of other tings to explore on board as the ship has had  $120 million in amplified upgrades and has a mad range of luxurious onboard amenities. That means you can look forward to everything from VR bungee trampolines, a surf simulator, laser tag, ice skating, a fitness center and much more.

In the build up we look forward to four of the best acts to catch.

Chicago’s modern poster boy Gene Farris has released on vital labels like Toolroom ever since he first heard house music aged 11. It is in his bones, so he knows it inside out and offers a truly authentic experience.

Chus is one half of the Spanish duo Chus & Ceballos. On labels like Stereo he has reinvented tech house for the modern era. As a Dj he shows how powerful yet emotive the sound can be. Always well worth seeing.

One of the US scene’s most recognisable players, Claude is a big time DJ. His sounds are driven by big bass, dirty breaks and characterful samples and sets are nerve less than electric affairs that go broad.

Hailing from a city steeped in house culture, Chicago’s John Summit has quickly become the hottest name in dance music following the release of ‘Deep End.’ He hasn’t looked back since and is a real modern star. 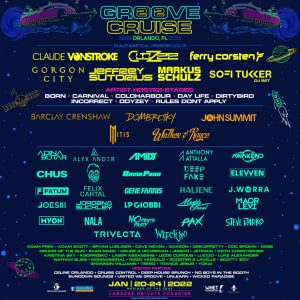