Describe 3 seminal moments in Bosconi existence?
Well of course when the first release came out, also when we released the 5 years compilation “Bosconi Stallions” 4×12” Box, and finally the Bosconi night at Panorama Bar was one of the first full showcases from an Italian label ever done at Panorama. 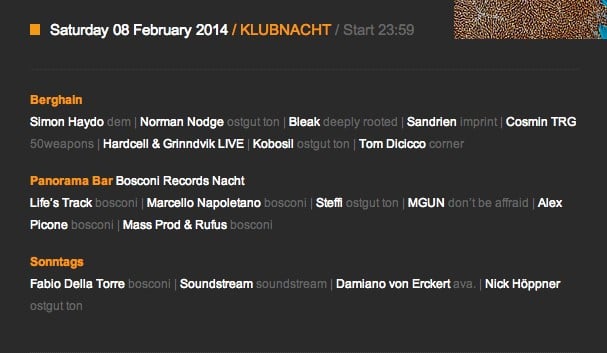 Most disappointing moment in Bosconi existence?
Everytime a record doesn’t sell as expected is a bad moment. The market has it’s own dynamics, but sometime it’s more disappointing for the artists who has expectations of his music

Describe Bosconi album artwork?
The artwork texture represent strings from the modern science theory.. Theory of the strings indeed!
That would only mean we used the strings in an quite unconventional way.. musically speaking.

Best Bosconi showcase?
Best Bosconi showase I already mentioned was the one at the Panorama bar, I also always enjoy very much the Bosconi nights we do at Tenax in Florence, which is the club where I come from and where I’ve always been playing since I was a kid.. so it creates quite a special atmosphere!

Worst Bosconi showcase?
To be honest I don’t have memory of a bad Bosconi showcase – seriously! Even when there’s not many people there is a super nice energy between the artists and the people, and as long as they enjoy the music it’s always good!

Dream Bosconi artist?
Well, I would love to release some music from Daniel Bell which is one of my favourite DJs and producers ever, but it’s a dream and will remain so 😉

Longest Day(s) ever worked?
I’m actually not the guys who can stay awake for days.. but this one time I played in Animal Social Club in Rome on a Saturday evening, then I went straight to Concrete Paris to play on Sunday morning. I liked the party so much that I stayed until the closing and played b2b at the end on Monday morning with Jan Krueger. Then not happy we went to the Rex club anniversary… but that was just fun, like the rest 😉

Upcoming projects?
We have two various artists called “The Sweetest” series with 11 unsigned artists planned for the end november on Bosconi Extra Virgin. And also a new Upcoming project from 100Hz and 2 new artists from Japan.