The Rainbow Venues has long been the centre of all the great electronic goings on in Birmingham. It is a sprawling collection of spaces that range from small and intimate to massive and raw. From urban to high tech, the styles of each spaces differs greatly and so the music in them does too. Making great use of all the facilities at their disposal was the huge Chapter 11 festival recently.

Thrown in honour of the fact the Rainbow has now been driving the Brum scene – in fact the whole of the Midlands scene – for 11 years now, it all kicked off for us in the garden with a fine set from local boy Bastion. And thats the thing about The Rainbow, it has always pushed local talent and local parties as much as international stars and long established brands. Some of the key cuts at this early stage included the sweaty likes of Mark Henning’s ‘Trojan’ and the piano house of Paul Woolford’s remix of George Fitzgerald’s ‘By The Way You Move’. 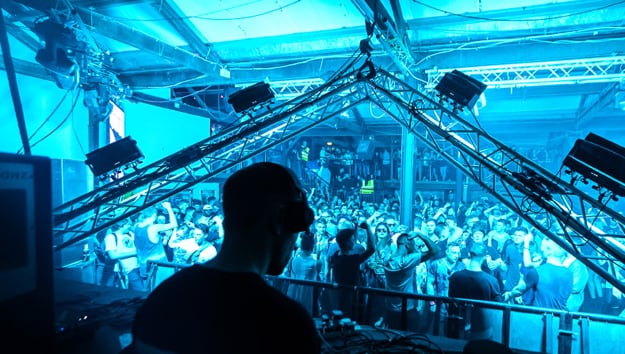 And then it was to another local star, Tom Shorterz, who locked down the floor with his knowing hose selections and sun kissed beats. The vibes were flowing at this point and already there was so much more to come. he crowd allied it up and were a mix of young and old, boys and girls, and they all partied as one in perfect, friendly harmony, just as it should be.

There was too much to check out everything, but later in the evening plenty of techno tinged highlights came from Detroit kingpin Seth Troxler, who locked it down in The Arena, whilst Bicep also come correct with some Balearic tinged beats. Elsewhere Steve Lawler did his tough tech thing to great applause and DJ Zinc proved once again why he is such a legend with his meaty, classically inclined garage set.

Once again then, this festival was a perfect offering from the Rainbow venue, with a wide range of music in brilliantly diverse and boutique spaces. If you haven’t made the pilgrimage up there yet, you should so so soon!