Set in the sleepy rural town of Roermond about 40 minutes from Eindhoven, the Solar Weekend is hidden away in the Southern depths of the Netherlands. That said, during party time the festival awakens the dancing masses that temporarily populate the previously poppy-filled landscape.

We arrived late Friday after a leisurely stroll around Eindhoven taking in the sites of the city. The campsite was already bustling, and after sharing a taxi with one of the most excitable taxi drivers you’d care to meet (at one point he was going to join us for the weekend) we managed to navigate our way to the camping AREA. A matter of seconds later we stumbled upon ‘Mingers Kingdom’ – at first glance you’d be forgiven for thinking you’d just arrived at Holland’s version of Newcastle’s ‘Beast Market’ with a name of that nature, but dig a little deeper and you soon discover that it is merely a juxtapose in language that causes the gentle raise of the eyebrow after catching your first glimpse of ‘the kingdom.’

#Historylesson – Marcel Mingers is the father of the festival, a larger than life, proud and burly man who boasts a collection of widely impressive festivals, Solar being the ‘baby’ of those, yet still one that came to fruition some 10 years ago… I digress. After a welcoming beer (or two) and an informal introduction to the crew behind the event, we decided to down tools at the crew campsite and headed over to the main campsite. We had been told by the owners that they do things a little differently at the campsites over here… they weren’t wrong! 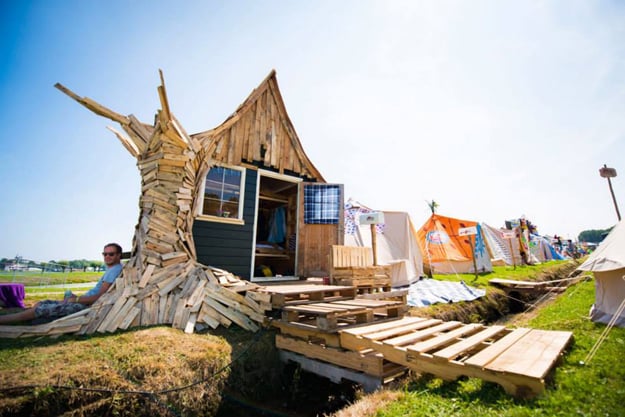 A 10 minute walk around an extremely picturesque lake, we maneuvered our way through the ‘Alice in Wonderland-esque’ campsite, the inhabitants of each tent had gone to extreme lengths to make their temporary residence the most outlandish on the site and it made for an amazing kaleidoscope of colours and a superb mixture of sounds and characters.

Shortly after that we arrived at one of the many stages that were on offer for the revelers of the festival. Yes you read that right, there were stages IN the actual campsite ‘sleeping area’ and I use the term sleeping in the loosest of ways. The most amazing spectacle of the night was a lone tent perched on the beach about 100 yards from the front of the stage, hoards of people dancing around it as though it had been swept onto the dancefloor by the vibrations of people dancing in unison to the music that was being laid down before them.

As we moved on to discover other sections of the campsite we found a small tent perched atop a hill. Nothing but treble emitted from the tinniest of ghetto blasters but it was still audible enough to hear the distinct vocal of MF Doom laying down his rhymes over his comic stripped beats. Eager to discover more we dived into the tent… A hodgepodge of second hand sofas, beanbags, all types of trinkets and furniture lay before us. The aptly named arena, ‘Just Do It Yourself’ echoed perfectly the sentiments that the owners try to instill in every aspect of the festival ethos. These guys really knew their shit, I mean the guy was playing 7-inches off of just one, extremely worn out turntable. As each song came to an end the crackle of the needle signaled the changeover as a mix of hip hop beats, funk, a twinge of acid and the rest all dropped. Shortly after we decided to hit the hay, it was only Friday after all, and technically the festival hadn’t even started yet. 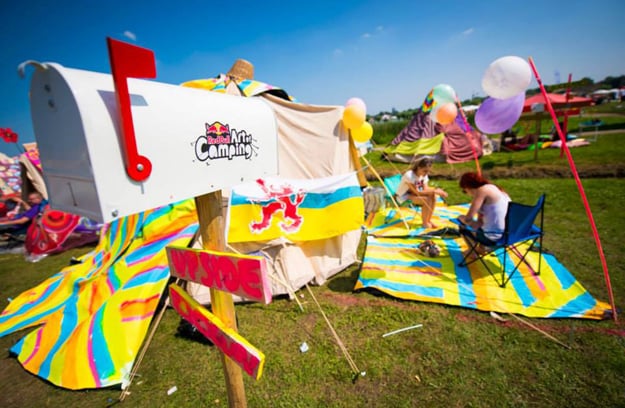 Saturday started as a bit of a discovery day: we wanted to take in the sights of each corner of the festival, musically there was something for almost everyone; live bands, an inflatable hip hop chapel, not one but two techno tents, a massively popular tent with a DJ booth made from the front end of a vintage fire truck and various other tents too. As we ventured into the festival further we discovered a ‘Crystal Maze’ like dome, toilet roll strewn across the frame, but it was the familiar beats that drew us in.

A classic Karizma tune was being roadtested to a relatively young crowd and they were lapping it up akin to Man United fans’ enthusiasm for their new Dutch savior, Louie Van Gal. It was safe to say we had found our bunker of choice for the best part of the day, The Toilet Room. Now for those who don’t know, the Toilet Room started as a tongue in cheek play on the Boiler Room project. 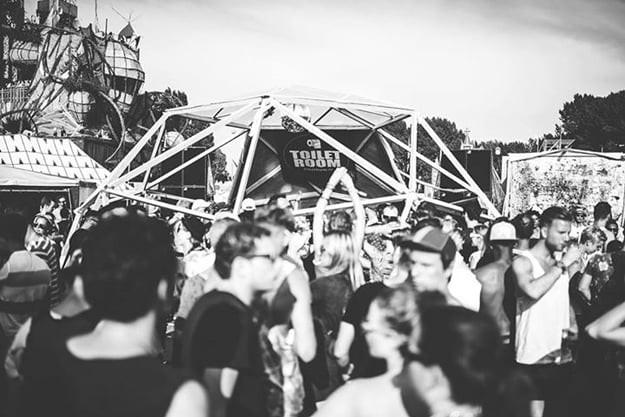 Unsurprisingly the concept is pretty simple, raves in toilets, but the hysteria around the brand has seen it begin to outgrow that ethos and they continue to push on at festivals around Holland. I’d strongly advise you check out a Toilet Room near you soon. But only one that’s hosting one of their certified events, otherwise you’ll just look like a certain ex-Wham member trying to score some dope and a fruity encounter with a fellow toilet attendee.

As dusk rolled in Hercules & Love Affair and I Am Legion were on the to-see list.

H&LA were their inimitable selves – their camp take on acid house is highly infectious even to the most cynical of folk. With a political edge to boot, the group don’t hold back and seem to perform at their utmost and their songs, too, echo the most powerful sentiments. 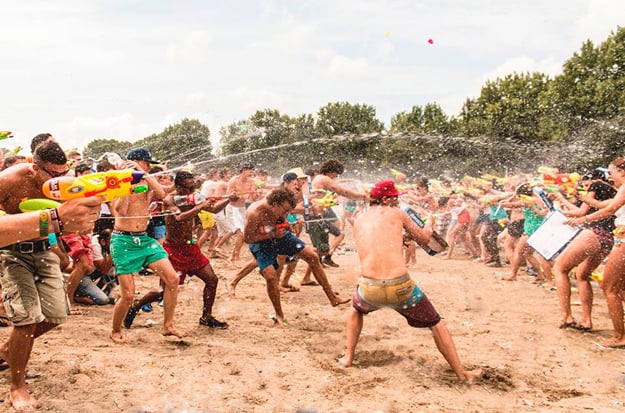 I Am Legion were one of the headliners for that day, the recently formed dream team combo of Dutch dubstep act Noisia and London based MCs Foreign Beggars proved quite the spectacle. It wouldn’t be my first choice musically but their high-energy performance, eccentric MC skills and blend of visuals really worked as a live performance.

During the evening we swung by the techno tent (which was listed as the Techy Tent) to catch Joris Voorn’s set and also have a few words with him too. The highlight was his closing tune Oxia’s ‘Domino’, which really sent the crowd into overdrive. Fun times were had that day, and I’m still searching for my vocal chords as I write this after excessive air fisting and shouting. We rounded off the night with another trip to the campsite afterparty where two pirates were strumming electric guitars and congas along to rolling techy grooves (hopefully you’re building a nice picture in your head of how that may have looked). 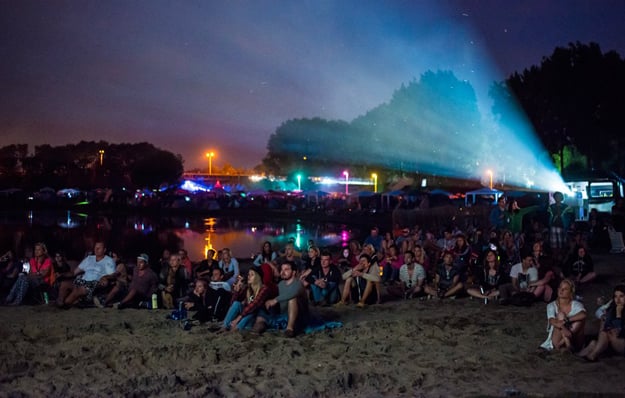 Sunday, A relatively good sleep, considering. Showered and ready to roll we had a tipple of wine for starters… does that pass for a continental breakfast? After that we headed over to Mingers Kingdom to get the lowdown on what to check out for the day.

We decided to have a more relaxed carnival day checking out the various attractions around the festival on what was our final day (boohoo). Things began to kick off right away after a 6ft5″ Elf hand-picked us to undertake the Karaoke challenge (we feel like our jazzy get up may have contributed to us being singled out for the singing session of our lives). The Karaoke was a vocoded, pitch bent Chipmunk Karaoke which turned into an impromptu beat box session at the end whereby we had around 100 people chanting, ‘Solar Weekend’s having a good time!’

Then there was the ‘Theatre’ arena. Some of the best chicken I’ve eaten in a long time cooked up on a BBQ that looked like the train from Back To The Future 3, by a short, friendly Samoan man who was extremely happy that he’d satisfied our chicken needs, we were happy he was happy, everyone was happy. We ventured through an overgrown forest passage into the performance area where there was an estranged group of individuals carrying out a rather vigorous interpretation of what I could only describe as naked burlesque styled on the classic Jason and the Argonauts films of the sixties (but with outrageous feline facades).

All in all Solar proved to honestly be one of the best weekends of my life (and we’re not contractually obliged by them to say that in case that’s what you’re thinking). Not just musically but the overall ethos, effort and love that’s put into EVERY stage, EVERY aspect of the festival, EVERY idea and EACH AND EVERY person at the festival was above and beyond the norm.

It’s a 60-min flight (45 on the way home) from London so it’s even quicker than going to most places in the UK for festivals. I’d encourage each and every one of you reading to seriously consider checking out Solar next year or, failing that, one of the other Extrema connected festivals, I haven’t been to the others but I’m confident they’ll be just as well programmed.

Final verdict: An Extrem-ely good festival! (A review wouldn’t be a review without a good pun).