News has reached us about a new development at one of our favourite London venues, the ever impressive Studio 338. You will probably have seen our interview with Dan Perrin, Music & Events Director at the club, which was published just rceently. Dan teased us by saying Studio 338 had more big plans for this year, without revealing too much – however, we can today share the news that Studio 338 have been beavering away on a brand new rooftop bar, which looks amazing!

The Light Lounge which be opened over the Easter weekend, offering a comfortable environment for ravers to relax away from the music. Overlooking the terrace, the bar will allow punters to gaze over the dancefloor as they enjoy a drink or two. As if that wasn’t enough, the 338 teal continue their quest to make the club space the very best it can be – with plans to tweak the sound and decor at the end of April, making further improvements to the brilliant space.

On top of this, we can also reveal the club’s mouthwatering Spring line-ups, which feature a whole host of top of the top names representing the very best in house and techno. Boom!

April 2nd: Former Radio 1 host and Bestival owner Rob Da Bank and soul and reggae legend Norman Jay MBE both headline Cirque Du Soul. Harry Wolfman, Weaver Bros, Luke Wolfman and more also join in the fun. This night is celebrated around the world for its dedication to sensory stimulating dancers, colour, production, street performers, fire eaters and crazy costumes, so be sure to sample the spectacle in all its glory.

April 4th: Tribal Sessions hits the capital for the first time this year ahead of another mad summer at Sankeys Ibiza and will Darius Syrossian, Sidney Charles, Jozef K and Winter Son all play. 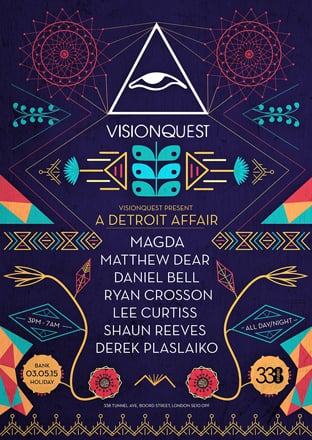 April 25th: Krankbrother host another one of their epic day and night parties using the terrace to its full potential. Ovum boss Josh Wink headlines along with the Krankbrothers themselves, Items & Things star Marc Houle, the badboy Paul Woolford and Swedish techno duo Skudge.

April 26th: Abode get their Sunday parties pushing on with Flashmob headlining accompanied by Longplay, Jimmy Switch and more.

May 3rd: Visionquest host a Detroit Affair with Motor City stars including Matthew Dear and Daniel Bell, plus Items & Things boss Magda, and of course the boys themselves – Ryan, Shaun and Lee, with Derek Plaslaiko closing things out.