Studio 338 has quickly become one of our favourite venues in London, and we’re not the only ones – in the past year the south-east London venue has become a ‘go-to’ location for ravers from across the capital and plenty of people from outside of London and the UK itself. The club has a consistently high caliber of bookings and brand link ups from Steve Lawler and VIVa Music, through to Cocoon, MK, Kevin Saunderson, Crew Love, Secretsundaze, Mixmag Live, Sundays with Abode and many many more superb DJs, record labels and party brands. This coupled with an amazing Void sound system, the infamous terrace, which offers the opportunity to rave in the daytime all year round, and plenty more features, means it really is a fantastic place to have a knees-up. We chatted to Dan Perrin, Music & Events Director at the venue ahead of their first birthday this weekend…

First of all, can you please introduce yourself; your connection with music, your history as a DJ/booker and how you got involved with Studio 338?
For years I was DJing and producing, all the way from garage in the late nineties through to techno in about 2005. Then, around 2008, I launched my first party with a couple of friends. Fast forward a year and I was offered the role of Events Manager at Cargo in Shoreditch before becoming Head of Programming at the hugely promising but ultimately ill-fated London Pleasure Gardens project. Along the way I also founded a party called Art of Dark with Colin Chiddle… It was through searching for a large space for our third birthday which led to me Studio 338 just as the redevelopment was being completed. I got on really well with the owner and we found we share a similar outlook on how the venue should develop and the rest, as the say, is history…

Can you describe Studio 338 in its previous incarnation (The House And Terrace)? Had you been there before?
I never went to The House And Terrace. It never really had any events that interested me and it’s probably a good thing I didn’t, as that has allowed me to view Studio 338 with a totally fresh perspective.

Tell us about the ideas/planning that went into transforming House & Terrace into Studio 338…
In the early days of my time here at 338 I was asked about House and Terrace quite often. To me its like asking fabric about the abattoir or Ministry Of Sound about the bus garage. It’s a totally new venue with 100% new facilities, sound, decor, capacity, ownership, team and music policy. So it’s not a transformation, it’s a totally new entity that I don’t think has anything in common with T.H.A.T.

One of the complaints people often used to have was that the venue is ‘too far away’ from everything – how have you dealt with this?
Again this was something I was asked a lot during the early stages of working on the program. My answer is that the venue represents a totally unique experience that can’t possibly be replicated any more centrally in a city like London. All the shows we do here have the feeling of being a special occasion and I pay close attention to ensuring that whilst the calendar is always full of high-caliber brands they also appeal to slightly different audiences each week in terms of their musical output and vibe. Studio 338 I see as a destination for a really big party and therefore people are happy to travel those extra few tube stops!

Were there any ideas you guys had that just weren’t possible?
The venue is really versatile in terms of capacity and usage and can accommodate so many different applications that I genuinely have not come up against anything that hasn’t been possible. It works well for more underground stuff like [a:rpia:r], ItaloJohnson etc… right through to full capacity mega brands like Cocoon and VIVa. We always have the philosophy that the quality of the music and the event come before the expected turn out. We would rather do something which we’re proud of with just the terrace open, than to have the whole venue available for something which doesn’t suit us.

How long did it take to create Studio 338 as it looks now?… And it’s said to have cost a fair bit too?
Almost everything you see now at Studio 338 is new and has been developed in the last one and a half years. Right the way from the actual structure of the building and the terrace itself through to the bars, toilets, sound and everything in between. It took a huge investment of love, and money, but it was more than worth doing to create something fresh and exciting.

Who took charge of the sound etc…? Why did you opt for the Void system?
I managed the selection of sound along with the owner. We gave all the usual suspects a run at it and found that the character of Void was the one we found the best experience. It was also nice to install Void as it’s a surprisingly rare sight in clubs in the UK. It took about four months of very late nights as we worked on the task of getting the best sound on the terrace including building a cardioid bass array, infinite baffles and burying the sound in the stage. It’s a constantly evolving thing as we work on the system all the time to achieve the best results.

So it’s been over a year since the relaunch now, what have been the highlights?
It’s hard to pick out a few from the whole 12 months! It’s genuinely been a dream first year and things like Home, which is our partnership event with the [a:rpia:r] gang, Soul Clap’s Crew Love, VIVa, Sankeys and Cocoon have all been incredible. But that leaves out so many other insane parties though like Hospital Records, Eastern Electrics, Half Baked and loads more.

Have you achieved everything you wanted so far?
There is always something more to achieve and I tend to be someone who finds it hard to stop and appreciate how far we have come. My mind is always on the future and the next big thing I’m working towards. For example this week we closed the deal on one of the biggest DJs on the planet and I realised that I had just signed the contract and moved on to the next thing without taking any time to appreciate what a landmark that was. Sometimes you have to stop and realise that, if you could tell yourself when you were first setting out what you had just achieved you would have done a cartwheel. I have to try and be conscious of enjoying the successes when they are happening and not just have a one track mind towards bigger and better all the time! 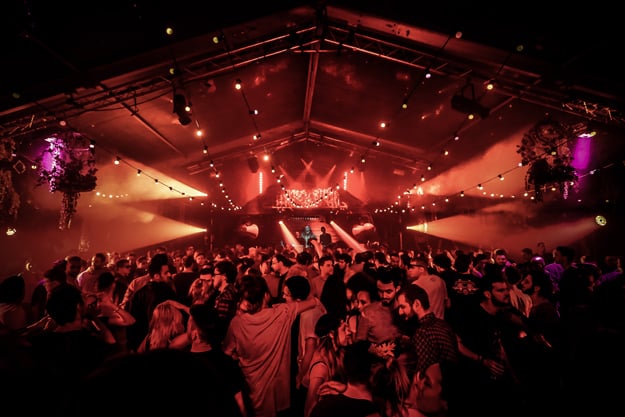 What’s the ethos behind Studio 338, what do you think makes it stand out from other clubs in London?
I guess the key difference is the terrace. In London most of the places we go out to listen to good music are dark industrial type spaces which are great but i think Studio 338 offers a refreshing change to that environment, which we try to evolve all the time through new production settings and extra touches. Other than that we have a strong ethos of only taking on the very best parties and the highest quality music from pioneering artists and we pay close attention to our door policy to ensure the vibe inside is always right…

The first birthday is coming up, what are your plans?
Well we have a line up I’m really excited about which represents a good spread of the artists and sounds which represent Studio 338 well including Ellen Allien, Nathan Fake live, Guido Schneider, Lowtec, Laurine and loads more. We have some special production planned, too!

What does the future hold for the club?
As we head into the second year it’s about further refining the program, bringing a few key new brands on board for showcases and signing up some of the huge artists we’ve been tracking in year one. We are committed to building a calendar which encompasses the very best from the world of underground dance music and there are still a lot of new horizons to explore on that front, including live music and more ‘gig’ type affairs on a Friday night for example. We have some new development plans too which will make 338 an even more exciting place to come and dance.

What’s the most important lesson you’ve learned so far since opening Studio 338?
Every visit to 338 is a ‘big one’ for the people who are not here every day… i.e. my friends, artists, promoters and generally everyone else except me! So i am learning to pick my battles in terms of partying as last year involved way too many hungover Sunday afternoons! This year I’ve made a vow to keep it to once or twice a month to have a few tequilas or I can’t be at the top of my game all week afterwards. Better to have a few well earned ‘hair down’ sessions and keep a lid on it the rest of the time, I say.

If you had a bottomless bin full of cash, who would be on your all-time dream team line-up?
It’s going to sound proper music snobbish of me but, if we were talking about dance music, my dream lines wouldn’t take heaps of cash… and most of them feature in the 338 calendar at the moment anyway! Radiohead, The Knife and trentemøller would make a pretty decent Friday night session though if you have a million or so to spare.

Finish the sentence, ‘without house and techno I would’…
Not be doing what I love every day.