Here’s some more excellent news, Tribal Sessions is back in 2015 with an even bigger, better and more authentic line-up of forward-thinking acts than ever. Sankeys Ibiza’s flagship night has always been about focussing on underground stars, pioneering DJs and forward thinking producers. Nothing is changing in 2015, Sankeys Ibiza will offer up no less than 30 Tribal Ibiza debuts from this phase one announcement alongside some truly talented residents.

Last year Tribal Sessions made it’s island debut with a big bang with there being something of a classic feel to all of the bookings. This year it’s all about artistic merit and musical quality. 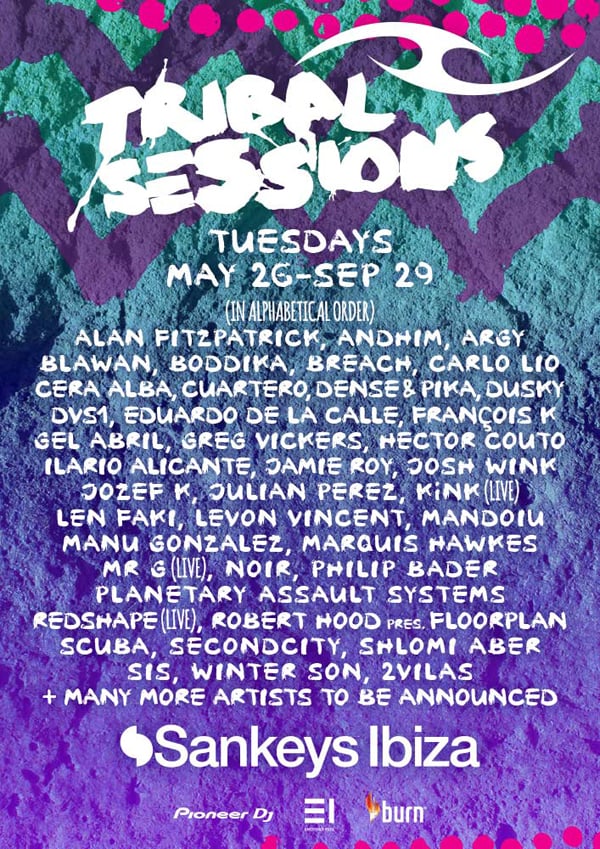 The night is built around two weekly residents, Jozef K and Manu Gonzalez. Prolific Greek house and techno don Argy will also be joining the Tribal team this summer. He has released renowned albums and singles on some of the most prestigious labels and shows no signs of slowing down. Argy performs 12 shows in the LAB. Secondcity plays 10 shows in the beloved basement, while other regular guests on rotation include Be As One label boss Shlomi Aber, who’ll be appearing for five shows over the season. Levon Vincent has four dates as does Non Plus boss Boddika and Spasnish star, Cuartero.

The whole season will be book marked by a huge opening and closing party and, in-between, more than 60 different artists will be taking charge of the famed Ibiza club. Tribal Sessions will follow the vibe of last year with the party kicking off at 9pm with a free BBQ on offer for those who get down before 10. You can’t say better than that!

The season finale comes on the 29th of September with a huge line up that includes Argy, Jozef K, Julian Perez, Secondcity, Shlomi Aber and no less than five unannounced special guests. This is sure to be something special as Luciano rocked into the Tribal closing party last year as a last-minute surprise, so hold on to your hats for this year’s secret guests.

And don’t forget that Sankeys Awakens next week. The renowned club are putting on two huge opening parties to welcome in the 2015 season. Kicking off on May 20th we will see artists like Adam Beyer, Ida Engberg, Secondcity, Noir, Tube & Berger b Argy all descend on Sankeys Ibiza.

On May 21st, we will see artists like Steve Lawler, Amine Edge & DANCE, Greg Vickers, Tough Love, Low Steppa, Jozef K and Matt Jam Lamont all play at the legendary club. Sankeys will also be hosting the official IMS after party on the evening of the 22nd.