Perhaps something of an eyesore, but The Elephant & Castle has held a significant place in the history of the UK dance music scene, not to mention being an establishment that dates back some 200 years. Now, the landmark pub where UK garage was invented is being turned into…a Foxtons.

In the early 90s, The Elephant & Castle in South London was the site of Happy Days, the legendary indoor Sunday party, where UKG originator Matt Jam Lamont was resident.

The intimate rave was meant for clubbers leaving Ministry Of Sound on Sunday mornings, as its location was across the road. There, Lamont would play dubs of US house tracks at a sped-up tempo. This quick style would eventually morph into UK garage.

In conversation with Red Bull Music Academy, Lamont recalled the time he played “the first-ever UK garage record” in the building. “When I played ‘Feel My Love’ at the Elephant & Castle, that was it, the track shook the windows,” he said. “The owner of the pub ran up to me and was suddenly telling me to turn the bass down. That was the first-ever British garage record.”

The first written record of The Elephant and Castle pub was made in March 1765, exactly 250 years ago. It remained part of this proud south London community until earlier this year, when its licence was revoked after an assault.

Consultants acting for Foxtons have contacted Southwark Council about plans to turn the pub into a new branch, giving way, once again, to the cultural crimes of gentrification. In a statement, William Forster of Valore Real Estate says:

“Southwark Council are leading a £3bn regeneration programme in the Elephant and Castle which will create an exciting Zone 1 destination for London.

The regeneration will include the creation of a new pedestrianised town centre, a market square, 5,000 new homes, 450,000 sq ft of retail space, an integrated public transport hub and five green spaces.

Local people will benefit significantly with access to more local jobs and training opportunities, and new cultural and leisure facilities.

As a result of this regeneration, backed by Southwark Council and the City of London, there will naturally be changes to support the improved infrastructure. Estate agents, local supermarkets and restaurants are just some of those and Foxtons entry into the area is testament to the the long term benefits”. 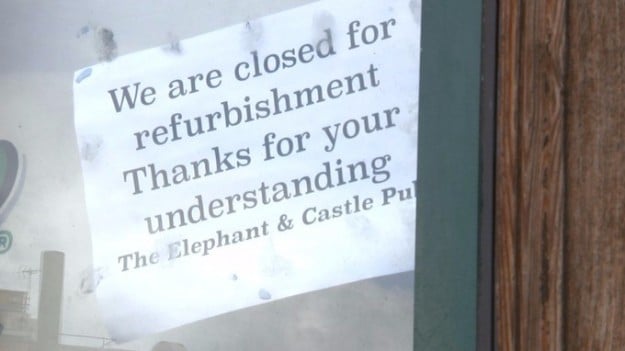