So, a few months ago Deep House London were in Madrid with Santé and his manager plus his booking agent and we had a great old time during Madrid Music Days. Over a few glasses of rosé, in a huge ham retailers, a drunken conversation about ham and meat led to a great idea – ‘Let’s do an interview about sausages!’, we suggested. All Santé’s team were up for it, but a hectic summer meant we kept on missing the opportunity to sit down and get it done. Well, summer is over now, Santé’s album is soon to drop and so, finally, we grabbed a chance to talk all about German sausages… here’s the resulting interview. Enjoy!

So, let’s start by talking about the role of sausages within German culture…
Each state in Germany has its own sausage, each sausage stands out perfectly for its own region and each region thinks their sausages are the best.

And which sausage represents your state in Germany?
Because my region is really close to Bavaria the most influential sausage is the ‘white sausage’, this sausage influenced me the most. The fat inside makes it white, there’s so much fat! Fat and parsley, those are the main two ingredients. We have this tradition, especially in Munich or Bavaria, where we cook them as part of a late breakfast or lunch… or we call it frühschoppen, which is two white sausages, a large pretzel and a big beer! That’s how you start your day in my region! [Everyone laughs].

Can you remember if there were any other sausages that you ate on a regular basis as a child?
Yes, wienerli – small sausages, which are now used in every hotdog. When you’re a child you get them once a week.

Were they a treat then?
…If I have a child I’m not going to feed them wienerli, because it’s not a good thing to eat anyway. 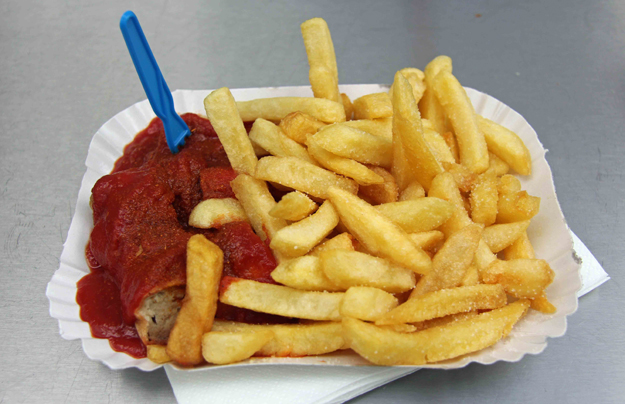 There are a lot of tourist spots that sell sausages, do you think that there may have been a drop in quality as sausage culture has been commercialised?
I might agree but if you’re going to buy a sausage in east Germany called thuringer for example there will be a butcher that definitely makes it in a far more traditional manner – with more herbs for example. But, all over, if you’re going to buy a thuringer or nürnberger, they all taste similar. Maybe one butcher won’t put as many preservatives as another, but taste-wise they all taste similar because this is what they want to achieve.

Going back to each state having its own sausage, how many of those have you experienced yourself?
A lot! Let’s start in Berlin; we have the currywurst, which is famous – maybe for someone who’s never had a curry it might sound disgusting but it’s a sausage without the skin, some ketchup on top and some curry powder on top. With a hangover it tastes delicious. Then we have the thuringer from East Germany, or the bratwurst, which is a huge sausage with a heavy flavour – they are mostly grilled with a crispy, golden brown skin. Then you have the nürnberger bratwurst, which is a huge huge one, I’d say 40cm, but rolled up like…

…a turd?
Yeah, and you have the plate which arrives full of sausage, the sausage plate! Every state has the same kind of make, but in different sizes and then you have the wiesswurst in Bavaria which are maybe 7cm long but they boil them, and the others are grilled. These are the main differences between the sausages across Germany. In Frankfurt you have a beef bratwurst – the size and colour is different, it’s more brown – they boil it first or you can have them smoked. It’s a really intense flavour, they taste totally different. It’s really delicious but you can only eat one of them. Sven Vath is a fan of those ones – the Cocoon club was close to a legendary butcher that served them all day, open really early, like 5am, and there was always a huge queue with people from the club waiting for sausages.

Out of all of the ones you’ve tried, which is your favourite?
The tofu one, from the Asian shop! Actually, I’m not a big fan of the sausage at all it’s ok if you have it maybe once or twice a year, but I’m not really a sausage. I would never buy them or cook them on my own – if I had to, I would say the weisswurst because of the tradition with breakfast. You would mostly eat them in a cool lunch situation with a friend, so it’s more the memories that make this sausage special – in a nice summery setting, outside with a friend.

Are there any special events, like sausage festivals, that happen?
I think every village has its own village fete and there are always sausage makers and lots of grills. It’s funny because I don’t think Germans are into sausages at all, they eat them a lot but… [to his manager] What do you think?

Santé’s manager: Yes I think so. After being in England for a while I went back to my parent’s town and we went to the supermarker where they had probably the biggest sausage display I’ve ever seen, ever! I kid you not it was huge, all sausages, tonnes and tonnes of them.

Santé: This is not normal. This is in south Germany! 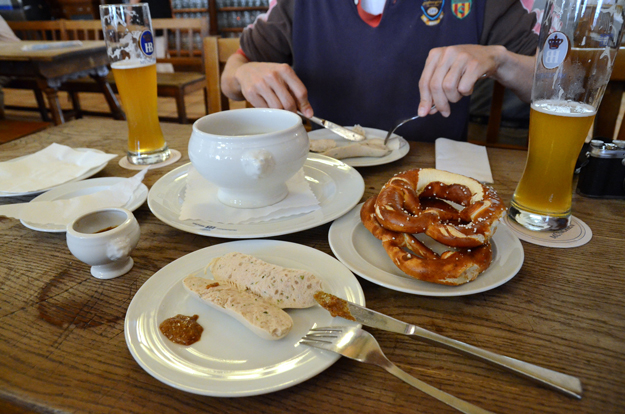 To have with friends… Weisswurst

I know you do your own parties with your label etc… Would you ever consider throwing a sausage party?
Why not, we could do a proper barbeque in the summer in Berlin. It would be absolutely possible, maybe not a German one because the Germans are already used to their own – maybe we could import some UK sausages.

Yeah; ‘This is the latest cool sausage from London’… hipster sausage! So, let’s talk a little bit about music – you have your album coming out this month…
Yes, it’s out on the 27th. The music is a bit different from the stuff I’ve released on other labels, it’s not so dancefloor-focused, it’s still house music and techno-influenced, but I’ve worked with a lot of vocalists. It’s a lot more for listening to, I wanted to show my diversity and my musical skills instead of doing 10 other techno tracks. I’m happy now because it’s finished.

How did you find the time to make it in between all your touring?
It took me a year and a half because I had so many different arrangements for it. It was difficult to find the balance between ‘this is Sante’, which every fan can appreciate and going down a slightly different road. Some tracks were a little off balance so, over the time I worked on it, I made a lot of music so I had a lot of different tracks to choose from and whittled them down to the 12 on the final tracklist. Part of it was recorded in London and the rest was made in Los Angeles where I spent the whole of January.

Lastly, where we recommend people from outside of Germany to go to for high quality sausages?
Munich, also Berlin and Frankfurt.

Sante’s debut album ‘Content’ is out on 27th October.