Good news for those who like the tougher side of club music, as Hotflush have announced their first label party in the capital for almost 12 months. Scuba and his gang will unveil ‘Reflexion’ at a brand new licensed venue in London, on the 28th March, and he’ll be bringing along some of the label’s core artists for each event, kicking things off with the mighty Dense & Pika alongside Function. 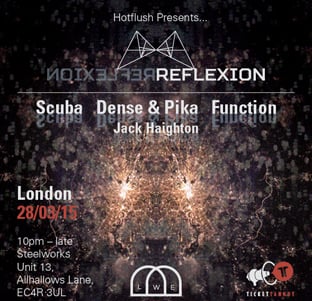 The party will be hosted in association with one of the capital’s very best events promoters, London Warehouse Events, so you can be sure it’ll be a polished affair in fact, LWE regulars might remember that Scuba only recently played for them in the car park at Tobacco Dock for the huge Drumcode Halloween party. In a couple of months he’ll be back in the capital to represent his own label at a new venue called Steelworks right in the heart of London, Cannon Street to be precise.

As you may already know, his cohorts Dense & Pika have had several releases with Hotflush. Initially emerging anonymously, the duo’s identities remained a mystery until quite recently when it was revealed that Dense & Pika are in fact, Alex Jones and Glimpse – two stalwarts of the UK electronic music industry who decided to have some fun by making stomping, warehouse-inspired techno.

Meanwhile, Function is renowned in the techno world for his contribution to the legendary Sandwell District, as well as releasing with labels such as Ostgut Ton. His album ‘Incubation’ was one of the highlights of 2013, and we have no doubt that will add a touch of class to an already superlative line-up. Not forgetting Hotflush label manager and Berlin DJ stalwart, Jack Haighton, who’ll be supporting the headliners. He is also the man behind sought-after digger edits series, Editions Haighton.

It’s going to be quite a party!