If there’s one act that truly embodies the house music we love here at Deep House London it’s Masters At Work. So when we heard they’d be appearing at We Are FSTVL this year in Defected’s arena, we couldn’t wait to share the news with you. 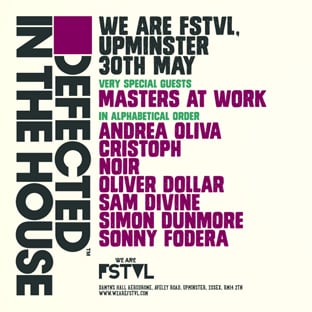 Defected In The House host the 6,000 capacity Very Big Top arena at this year’s We Are FSTVL, with Masters At Work just added to a line-up that already includes Oliver Dollar, Noir, Sam Divine, Simon Dunmore, Sonny Fodera and Cristoph. Lil Louie Vega and Kenny ‘Dope’ Gonzalez will definitely be one of the highlights at the Essex-based festival, which picked up the award for Best New Festival at the UK Festival Awards not long ago and has firmly established itself as one of the premier electronic music festivals in Great Britain within the space of two years. Not bad at all.

Masters At Work last appeared in the UK back in 2014, playing twice in two days for Defected last summer: at London’s Ministry of Sound and then again at a mesmerising Boiler Room session hosted at The Edition Hotel. The US house duo also play a special headline set for Defected on Saturday 04 April, with Defected In The House heading to Manchester for The Warehouse Project offshoot series Transmission at The Albert Hall.

Make sure you get to We Are FSTVL though, as we’re sure that’s going to be one of this year’s biggest days out yet again.