We’re big fans of Studio 338 here at Deep House London, you only have to scan through our weekly Party Tips to work that one out! So, it’s with great pleasure that we are able to share the club’s 2015 plans, which look set to push the south-east London venue’s popularity through the (transparent) roof. With Visionquest, Sankeys, Viva Warriors, Half Baked, Cirque Du Soul, Kehakuma and secretsundaze already on board and many more lining up to join in the frivolities at the club and arts space, 2015 is going to be a big one for Studio 338. 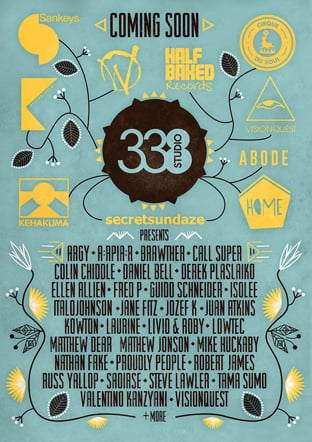 After undergoing a huge refurbishment last year, Studio 338 was relaunched onto London’s clubbing landscape with a high-end Void sound system now installed alongside one of Europe’s largest all day/night terraces. Open all year round, heated and covered, it’s been the location of many a great day and night for us here at DHL and we’re sure it’s been the same for many of those who’ve been down to Greenwich for a good old rave up.

2015 gets off to a flying start with a 12-hour opening party featuring Berlin trio ItaloJohnson playing a special four hour set, as well as sets from deep house rude boy Fred P, Kowton and the inimitable Call Super. The opening party takes place on the 7th of February, so jot that down in your diaries as it’s bound to be a special one.

A whole host of other party brands and promoters will be putting on special events at the club, with a list of the creme de la creme of house and techno talents on offer throughout the year; BPitch Control owner Ellen Allien, Border Community man Nathan Fake (who plays a special live set), Lowtec, Steve Lawler, Mathew Jonson, Livio & Roby, Visionquest, Matthew Dear, Daniel Bell, RPR Soundsystem and many more will ensure that Studio 338 maintains the high-quality bookings and parties it has already become famed for in the space of just a year.