Manchester’s cult underground club Joshua Brooks is under new ownership and has lined up a mouthwatering season for the first half of 2022. Between January and April there will be full label takeovers by Metalheadz, Butterz, and Richy Ahmed’s Four Thirty Two while Haus22 returns with DJ Rush for their residency and Darius Syrossian continues his monthly Moxy Muzik residency. Phase 2 artist announcements will come soon and tickets are on sale now..

Joshua Brooks is literally an underground club that has played a key part in Manchester’s music scene since inception in 1993. Known for its intimate and personal parties, world class sound system and raw, stripped back aesthetic, it has been the scene of many a legendary party and is now looking forward to doing what it does best in 2022 with a mix of red hot new names and enduring pioneers all line-up to start this new chapter.

Amongst the highlights of the new year will be the monthly return of the ever popular Darius Syrossian with his monthly Moxy Muzik residency. Moxy is a party known for its edgy, no frills house sounds. There will also be a huge seven hour retro special with the one and only Paul Taylor, then a full take over by influential grime, bass and garage label Butterz with key associates Flava D, Royal T, Elijah & Skilliam on 4th February, while the vital Haus22 returns for their residency with legendary Chicago DJ DJ Rush on 25th February and drum & bass legend Goldie brings his vital Metalheadz label for a take over on the 26th February.

2022 is already shaping up to be the best year yet in Joshua Brook’s long and storied history. Do not miss. 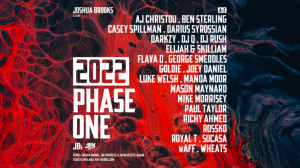