mono_cult started off at the beloved Lounge venue in the heart of Leeds way bak in 2007. Starting off my 4 music students with the same passion they hired their own sound identifying some of the then freshest talent in the house and techno market.

Over the years they have performed at huge festivals like Hideout, Unknown, Beacons and more as well as teaming with London stalwarts Hydra on their historic Sonar soirees. Here we sit down with head honcho Matt Long to chat all things mono_cult and their heavyweight line up this coming Saturday.

“The birthday is all about old and new faces,”

Why did you start mono_cult? What were you doing at the time, what was the plan?
We started mono_cult as we all had a passion for music, the five us had all met at Uni or from working out in Ibiza.

We chose to run a Sunday daytime parties as there was nothing like that going on in the city at the time and we wanted to offer something new. The Lounge was the perfect unused venue with an amazing terrace and alfresco vibe to it. We ran around a year of successful parties there till we eventually got shut down from the police due to sound complaints, from then we moved the parties to The Faversham, Mint Club, Wire, Full Circle, pop up warehouse spaces and eventually Canal Mills…

Who was involved, who were the residents, why did you pick them?
Originally it was started as a group of five (myself, Paul, Gaz, James and Ozzy), over the years it eventually whittled down to myself running it with Paul Kaminski remaining as resident alongside Brad Mercer. Myself, Brad and Paul will all be playing the 10th birthday.

How quickly did it develop and evolve to become a full time thing for you?
The first 3 or 4 years were just ran as a side project during Uni and working part times jobs, I started working for Wire and Hifi in 2010 as the events and programming manager that’s when I moved mono_cult into Wire as our new home. From that point forward I was focusing more time into it and really pushing our parties to grow it into a bigger project.

What was the booking policy of the night, how did you decide who to book?
The bookings were all based around acts and DJs that we liked collectively, styles changed over the years having a mix bag of people play for us from Theo Parrish, Tim Sweeney, Matthew Dear, Ame, Nina Kraviz and Kassem Mosse..list goes on

You went on to do parties in Barcelona and London – how did they come about? Were they all the same vibe, did you manage to recreate the Leeds feel everywhere you went?
I’d already ran some parties in Barcelona with 2020 Vision when I was working for them so I already had connections out there. I met Dolan (Electric Minds / Hydra) through a mutual friend and we both wanted to throw Off Sonar party so combined our nights together which worked great as we had a strong north and south pull. The Barcelona parties were some of the best I’ve done apart from the stress of working with the Spanish club owners which threw up some difficulties for us!

We started throwing parties in London in 2013 after searching hard for a venue, Dance Tunnel became the ideal spot and home for us, small, great sound system and an amazing team running it. A lot of our friends live in London along with Brad and Paul at the time so was easy to replicate what we were doing in Leeds, very similar vibe to what we had in Wire.

What have been some of the finest moments at mono_cult over the years do you think?
Having the opportunities to be able to travel around and play in different countries and festivals, meeting life long friends through it and hosting some of our favourite acts and DJs.

Why did you end it? Was it a hard decision?
It was a really difficult decision but the end felt right and the free time enables me to work on Canal Mills and my other projects.

What have you gone on to do in its place, do you feel there is a hole in your life where it once was?
Mono_cult has been a huge part of my life over the last 10 years however with that taking a back step I’ve been able to concentrate on other projects. I got involved with Canal Mills in 2013 coming on board with mono_cult and working as the booker and event manager, in 2016 I became one of the partners at Canal Mills and now work on that full time alongside our other events like The Garden Party and food and drink based stuff like Oktoberfest Leeds.

Tell us about the line up for the 10th birthday, what informed it, why book the acts you did?
The birthday is all about old and new faces, Panorama Bar resident Soundstream is someone who’s played for us for the last 6 years and rarely plays in the UK. Tale of Us return after they had their set cut short when they played last at Canal Mills in 2013 due to the infamous fire. Bicep are long term friends and regulars of our parties over the years and finally Mood II Swing have been an act we’ve wanted to book for a really long time, it’s great to have them over from the US for the birthday. 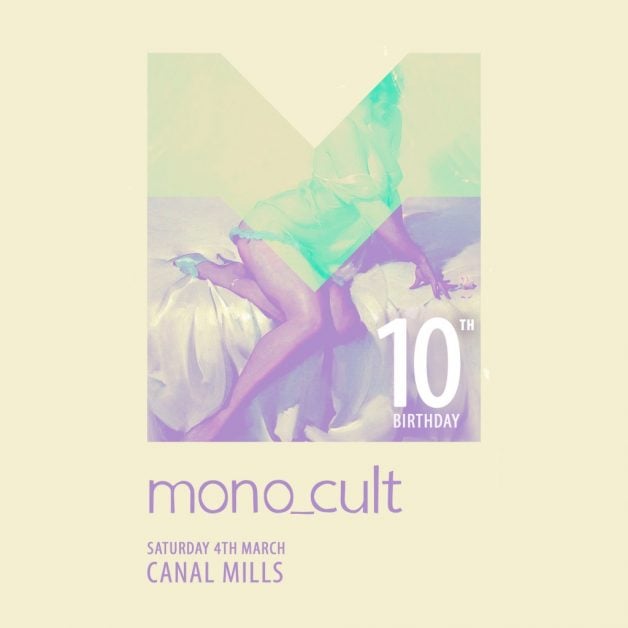