After a killer opening party that really set them in good stead, Reverse is now well into its season and is getting everyone talking on a regular basis. Tonight’s event, we hear, is a near sell out with 2,000 people passing through the doors of the Blue Vista room at Privilege.

Entering the club is an assault on one’s senses – blue light bathes the whole place and those crazy alien figures are all present and correct, dancing weird dances and chatting to clubbers as they wander by. The lights and lasers are in full effect and the sound system is crystal clear.

Those in attendance make for a nicely cosmopolitan crowd, and though 70% of the people here are English, there is also a great spread of Germans and Italians. Karretero, the night’s resident DJ, does a good warm up playing tracks from Mendo & Danny Serrano (“The Basement”) as well as “Alone” from Moon Harbour boss Matthias Tanzmann and “True School” from Marcelo Cura, as well as a fine blend of his own tracks. His set warms the crowd up well and builds a fine atmosphere.

After him the Mambo Brothers step up, their set is something of a pleasant surprise comprising a fresh modern blend of house from cats like Hot Since 82. They work the crowd well; building everyone up and taking them back down so as not to peak too soon. 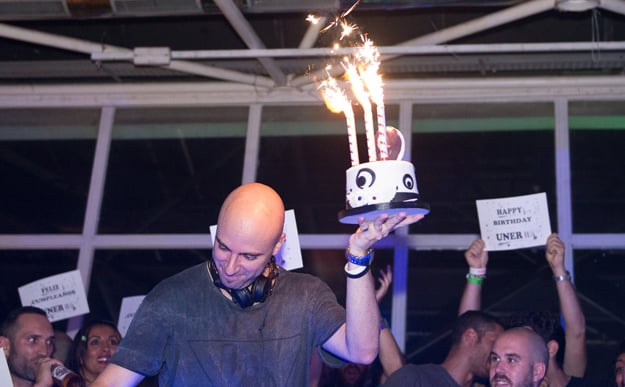 When the headliners 2manyDJs step up there is a surge on the dancefloor and the lights dim before exploding to life with some ravey electro sounds from the energetic duo. They look up to work the crowd as they work their gear even harder, spewing out a selection of their edits old and new with a few classics along the way. It makes for a frenzied, sweaty dancefloor and really is a sensory explosion from start to finish.

Following on from the Belgian brothers is a back to back set between UNER and Andrea Oliva. The duo serve up a tech house master class, and Dosem closes down the party from 5.30 onwards when only the hardcore remain.

The atmosphere and attitude of those on the floor is friendly and welcoming, smiley and accessible and the vibe all night long is never less than excellent. The music is on point, the production is extra special and the club itself is of course expertly set up by now. Reverse, then, has once again knocked it out of the park in 2014.