The summer season is fast approaching (yes!) and that means Ibiza openings are just around the corner (double yes!!). Every year the opening parties signal the beginning of the party season over on the White Island and news has landed on our desks of the line-ups at Sankeys’ first couple of events, which take place on May 20th and 21st.

The parties will be named ‘Sankeys Awakens’ this time around and feature artwork based around Star Wars, with cartoon versions of the characters from the famous movie emblazoned across the posters for the first two events. It’s now the fifth year since Sankeys landed on the island and what an impression they’ve made in such a short space of time. As if the sound and production wasn’t good enough already, they have spent the last month revamping it all to make it even better for 2015, and we can’t wait to get over to Ibiza to check it out when the club opens. 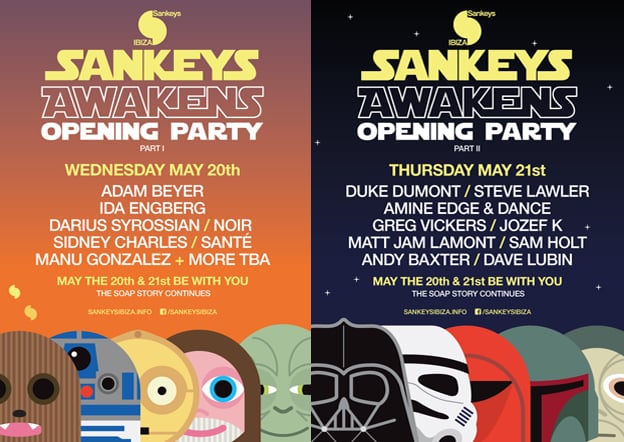 Today we can reveal that part one of the opening two nights features close friends and residents of Sankeys including Swedish techno don and Drumcode boss Adam Beyer alongside the talented Ida Engberg, Noir, Darius Syrossian, Sidney Charles and Santé and Manu Gonzalez will also be playing on the 20th.

Part two comes will include Duke Dumont, ViVA boss Steve Lawler and Amine Edge & DANCE. They will be joined by Tribal residents Greg Vickers and Jozef K, garage legend Matt Jam Lamont and Sam Holt from Copyright.
All in all it’s looking like a powerful start for Sankeys this year… we wouldn’t expect anything less!