Terry Farley’s place within UK dance music history is already assured. One of his many claims to fame is his involvement with Junior Boys, alongside Andrew Weatherall. The fanzine grew into a label, a party and a movement which was intrinsic to the world of UK dance culture in the early nineties. Terry’s involvement with the industry stretched beyond the club world, remixing high-profile pop artists and, eventually, producing for them too. He is widely recognised as a key authority on the history of electronic music here in the UK and, with that in mind, we asked him to name some of his favourite London parties from the past couple of decades. So here it is…

A big white film studio in Wembley saw Shoom fave Tony Humphries return for a legendary night. Big Tone had made his UK debut at Shoom’s midweek party at Busby’s and London loved him. Several hundred Shoomers danced until 6am to Tony’s mix of NY Acetates. De La Soul’s Morales mix of ‘Saturday ‘ was played several times – each time getting a bigger response. When the lights came on at 6am, a 10 minute ovation drew tears from the lady who had come over from New Jersey with him.

Kenny Hawkes and Luke Solomon’s weekly Wednesday featured the cream of young America’s second wave of house. Derrick Carter made his UK debut here and sent a room of London’s DJs heads off home and onto the wet and windy Shaftesbury Avenue all feeling like they needed to step up their game. Many of London’s best nights were midweek from Pyramid at Heaven in ’87 (London’s first big House weekly) to Pure Sexy at the Milk Bar. Spectrum, surely being the daddy, pulled in 2,500 dancers every Monday night. 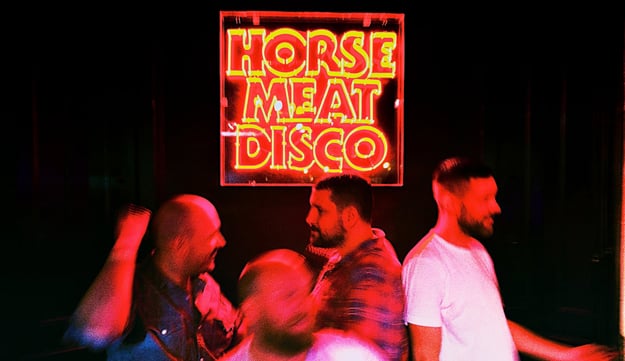 Horse Meat Disco at The Eagle:

Pound for pound THE best weekly club in London for well over a decade now. Sunday nights at The Eagle tavern in Vauxhall have made the HMD residents legendary all over the world. Jim Stanton, Severino, Luke Howard and James Hillard do Disco in the HOUSE way and it’s a predominantly gay crowd party well into Monday morning like it’s NYE every week. Big name house DJs such as Derrick Carter, Morales, Lil Louis and Kenny Dope have all played disco sets and Danny Tenaglia himself was recently seen dancing ‘til the lights went up at 3am on Monday morning.

High On Hope at Dingwalls:

Another weekly night, this time it’s a Thursday in Camden at the legendary Dingwalls. The brainchild of Patrick Lilley and Norman Jay, this brought the New Jersey sound to the fore while most of the country was in full blown acid house mode. Young Londoners, Ricky Morrison and Frankie Foncett, were the residents and the club attracted some of the capital’s best dancers as well as legendary PAs from the likes of Chaka Khan, Loletta Holloway and Blaze.

Substation South was a mid size Brixton gay club decorated in the style of a NY playground. We asked Danny, who was visiting London, to play for us on a Sunday night. He agreed, but said he would not charge if we let everyone in for free. This night still sends shivers down my spine as I type. To say he gave a master class is a wild understatement. Danny dropped a slate of a new vocal piano house tune that was ‘Look Ahead ‘ and the crowd screamed. When he stopped the drums and took the sweat soaked, euphoric crowd into a 10-minute live version of Kool and the Gang’s ‘Summer Madness,’ it really was as high as you can go.

So it’s an underground Victorian toilet on dirty, old Commercial St in dirty, old pre-Gentrification Spitalfields in London’s East end that opens up at 6am on a Sunday morning… you’re not sold? Rocky from Xpress 2 was playing and he woke me up at 6am with a coffee and we headed East. It was one-in one-out by the time we arrived and the young crowd hollered and howled at the deep and dirty DC10-inspired grooves. Liz Mendez and her girls, who still run Kubicle, worldwide, were like the SS and HMD boys (in fact, all great club promoters)… pied pipers who know what a top crowd want and give them that and some more…

DJs Giles Smith, Will B and James Priestley with Kristophe Hofford, making the unique spaces they used even more beautiful, pulled up London by its house bootstraps in the early 2000s. The first SS party I went to was on the roof top terrace of 93Feet East on Brick Lane around 2002. Maybe 100 (probably less) beautiful party people danced to underground deep house and the few who were there all had that look (a look I’ve seen a few times since I started clubbing in 1975) on their faces. It’s a look that says ‘Fuck, this is going to change things.’

Faith at The Key:

The Key had become King’s Cross’ underground gem. While the Cross was big, brash and sexy when it came to its house and its crowd, The Key was dark and intense. Sometime around 10 years ago, most of London had not caught the Dixon and Ame bug yet and Faith brought them over on a small budget from Germany and they schooled the crowd in tech/techno and European deep house. Upstairs an older Chicago cat called Rahaan also made his Faith debut playing disco and dusty old Chicago house in a way that shouted ‘Schooled by Raaaan at the Muzik Box.’ We miss The Key a lot.