Here’s a nice little surprise that’s cropped up this week. Carl Craig and Green Velvet have teamed up, seemingly in secret, and produced an entire album! The duo have merged the influences from their respective hometowns (Detroit and Chicago) to create a lovely collection of tech house joints, perfect for the dancefloor. 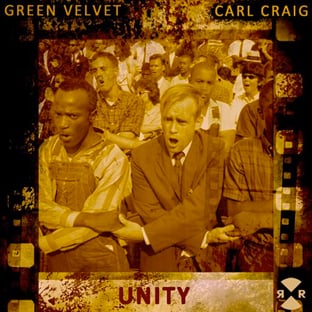 As anyone who knows about these two legends would predict, the music is on point and dance floor ready with plenty of nuances, hypnotic vocal loops and is basically firing on all cylinders from start to finish. Carl Craig announced the album, which is called ‘Unity’, via his Twitter account yesterday and, of course, the plays on the album are already in excess of 10,000 on almost every track.

The two men went back to back at Exit Festival last summer, so perhaps that’s where the spark behind the project first appeared. Certainly they have had a bond for quite some time now, but the news came as a surprise to many when it was announced yesterday… a very pleasant surprise at that.

The album has dropped via Chicago label Relief Records and we can’t recommend it highly enough. As always with the Deep House London team, we present to you music, artists and events that we’re positive about – no room for negativity here and the title of the album alone warrants our sharing the news with you!

Check it out below and make sure you follow the link to buy, which is right here.