Djebali is one of the foremost French producers of the day. He has a richly detail house sound that is deep, jazzy and masterfully organic.

He turns out plenty of tunes, mostly on his own label, but also for the likes of Freak N Chic – the label run by Dan Ghenacia, who was such an inspiration for young Djebali when he was growing up. Now he has put out his fantastic and far ranging LP ‘5,’ full of the sort of love fuelled, dynamic house tunes that make him so important and essential. He we speak to him about the album, as well as much more, and it is a revealing read…

I am good thank you, my album “5” is finally out in vinyl and also on CD and digital so, I am pretty good and happy. It’s a big step for me you know, it’s my first album, so I’m very proud to have it out there. On top of that, I am in the middle of my world tour for the album and I’ve played at some great clubs, parties and festivals so far: like Nordstern in Basel, Fuse Club in Brussels, SASH in Australia, Movement festival in Torino, the Fuse party at Village Underground in London, Huaka Festival in Peru already, and a lot more to come including a tour of Argentina. I managed to check out lots of the amazing spots in Peru while I was there, including Machu Picchu so, “What’s bad” you ask? Fortunately for me, nothing is bad here.

Tell us about how you first got into dance music in France and where – what labels and parties?
I first got into dance music through listening to the radio. Back then, there were some pretty good radio shows in France (this is right at the end of the nineties). I used to listen a lot of DJ mixes at home too as I wasn’t old enough to go out and I was good boy, so I stayed in and I guess did my very early ‘research’ into music! There was show by Cyril K and Jef K, and Ivan Smagghe or Dan Ghenacia. I used to record lots of the shows on tape, then on minidisc, every set and then try to find the tracks I liked in record shops during the week. Shazam didn’t exist back then unfortunately! Then, I started to go to parties in Paris and also afterparties like Kwality at Batofar, with Dan Ghenacia once again. There was also a really good party that I loved to go to called Open House. I followed a lot of house labels, like DoubleDown, Lowdown, Siesta, 2020Vision, Brique RougeDrop Music and Tuning Spork, Jay Haze’s label… So imagine how happy I was when I had the chance to release my first EP on Tuning Spork, or then on 2020 vision, or even remixing one of my heroes Inland Knights ! 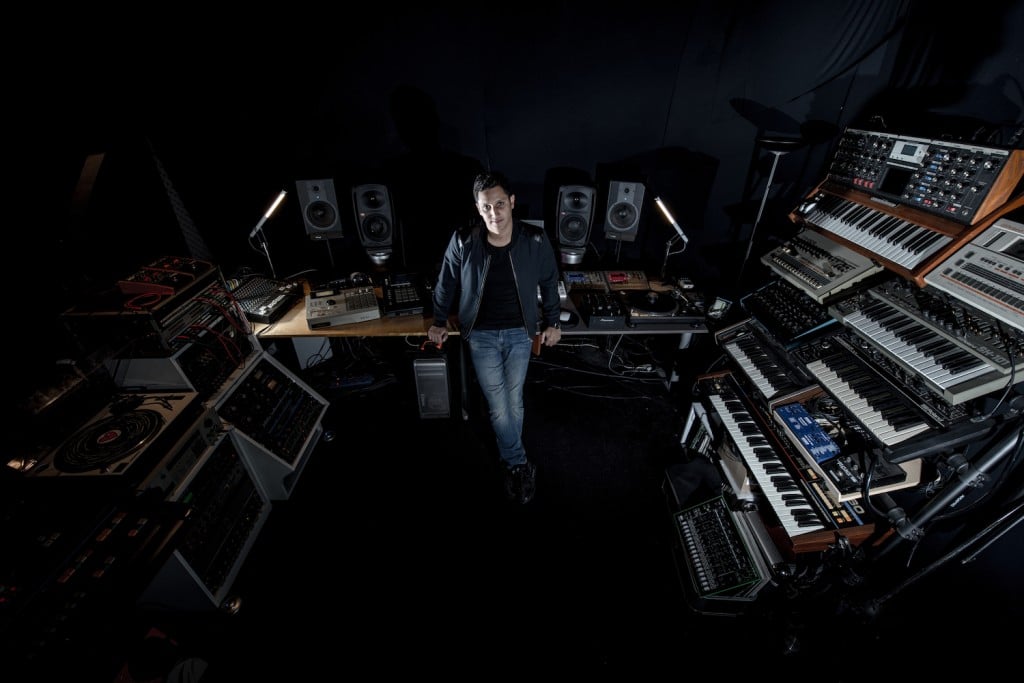 How long until you started DJing and making music? What gear did you use?
I started Djing with a friend of mine when I about 14 or 15. I am 32 now, so that’s a pretty long time now – over 18 years! My friend used to like hard techno while I was more into hip hop stuff… we compromised when we bought music by opting for house music – it was kind of halfway between fast techno and hip hop, so made sense. Initially I could only afford one turntable, with a cheap mixer so I started to try to mix with the turntable my parents owned, though it didn’t have any pitch control… it was a funny way to learn and strange yet helpful training. Then I quickly moved to the classic Pioneer mixer DJM300 and two Technics mk2…

In terms of producing, I started around 2004 with a simple computer and its poor quality internal soundcard. I used software called Reason back then . Soon after I got to work with Pro Tools as it was the one we used at school when I started a Sound Engineering course at SAE in 2005. So I used Pro Tools as the main software, with Reason in Rewire – a system that lets two different programs operate at the same time. I did my first EP “Fanfare” (on Tuning Spork) like this.

What were you into at first, what sort of stuff, and how have your tastes changed since then?
When I was a teenager, I was deep into French hip hop! I did a two and a half hour mix of all the stuff I love for a website called Don’t Lose The Magic a few months ago, you should check it out… I was also into funk and soul – a friend of my brother was travelling to Japan a lot a brought back with him rare funk edits, that were longer than normal and only available over there, so we would record them to tape.

So when I started to listen electronic music I was mainly looking for stuff with a lot of grooves, the kind of stuff you find in funk and soul music. I still care about this greatly and most of my productions are focused on the groove. You’ll never find straight 4×4 dark music from me…

And your first release came in 2008. What has changed since then? How have you evolved and improved?
A lot of things have changed of course. When I released my first EP I was a really young producer, still searching for my sound and figuring out my workflow. I started to buy a lot of hardware and realised that working with analogue gear suited me more than the digital way. It’s not about a judgment about the sound, it’s about finding the method I was most comfortable with and that made producing a joy. I’ve improved my studio through years (you can see a feature with Attack magazine where I speak about five main pieces of gear of my studio). So after hours and weeks and months locked up in the studio I think I found my sound, which you can find in all my releases, especially on my own series ( djebali ). Even if music is a constant evolution and you’re always searching for something. Listening to others gives you motivation and inspiration: it opens you up to different ways to experiment and maybe find something you may have not seen or heard before.

Tell us about your album. Why did you decide now was the right time for one?
To be honest, I didn’t ask myself: it just came to me. It’s like I needed it.

Over the years, a lot of people around me have asked me if I planned to make an album and the answer was always the same: “No, I not feeling it for the moment”! And last year I was simply ready, It was a sign. What I knew was I had to do something like I used to do, my universe, my type of sound, but with a story, a link between all the tracks. And I knew already I wanted an Intro…

Tell us about why you decided to make all the tracks for it in the same session. What are the pros and cons of that?
I did it to keep a coherence between the tracks. I wanted a common sound in all the tracks. When I do EPs, I just link up some tracks I made, but they can be totally different from each other. So for this special project, for my first album, I didn’t want it to be a bunch of tracks that I compiled on an LP. Working like this allowed me to keep comparing all the sounds of my tracks. So when I felt a track missed some highs or some medium or even some energy, I was able to react directly to keep everything cohesive. You can see the advantages of this, I wanted my album to be listened to from beginning to end, with an evolution but with the same vibe all the way through. Easy to listen during a long ride or at home. The disadvantages are quite big though: you can lose the essence of each track – a lot of people say that a track needs to be done ‘in the moment’, and taking too much time to produce it can turn the track into a boring pile of shit. So working on everything during the space of five months is quite dangerous but I tried to manage this issue as best I could and I’m pleased with the result. 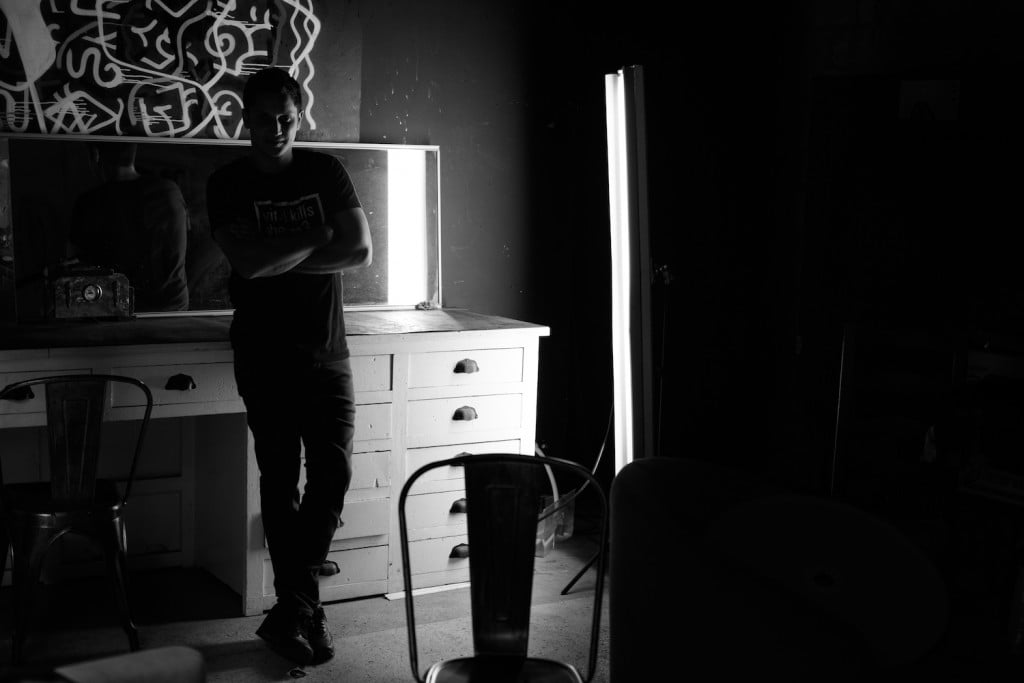 Have you got any formal musical training? Or are you more trial and error when it comes to studio work?
No I didn’t! I remember at school with the classic classes of “flute”, I was trying to reproduce some melodies I had heard which was difficult. So I am more about searching and finding, trial and error. I know my machines very well and I have a pretty big studio to experiment with a lot of different things. I think the most important thing to keep in mind is having fun. Then the magic will appear!

What gear did you use, where was it written and when? Does all that matter, does it effect the sounds that come out the other end?
I mainly use my MPC3k for all the drums, synchronised with a TR909.

Regarding bassline and other main sounds, I use different synths, all controlled by my main MPC: SH101, SH09, Moog Voyager, Juno60 etc…

I also have a lot of fun with the Doepfer Dark Time sequencer to find weird combinations. I use an effects unit a lot as well, like reverb and effect from Lexicon, Eventide H3000 and compressors and filters… everything is good for stimulating your creativity and giving you more ideas! I wrote the entire album in my studio in Paris over a five-month period, that’s why it’s called ‘5’ – and also because it was five years of the label. I worked mostly during the day but depends on how creative you’re feeling of course. I remember working on ‘Seven Blessings’ mostly at night.

As I worked only with analogue gear, it was fundamental to be in my studio to be able to work. I didn’t take “homework” out of the studio. I was in total immersion working on the album, and kept the sound tight through my mixer Amek by Langlais.

What is next for you, what else you got coming up in 2017?
I am still in the middle of the album tour now, so I’ve been more focused on DJing recently and spending less time in the studio, especially since last summer. Every gig I’ve had, combined with my travels to lots of cool places has given me a lot of energy and new inspiration to be now finally back in the studio to work on new material. So in 2017 expect more music from myself. I still run my ( djebali ) present sub-label – a platform for new artists, and also some remixes of “5” are coming. Gig-wise, I have a lot of exciting parties coming like another tour in Argentina, my residency Ideal Juice at Rex Club, the Rainbow Venue in Birmingham and another Juicy season in Ibiza… stay tuned.