Sections of the Central, Jubilee, Northern, Piccadilly and Victoria lines are set to begin on 12 September for all night weekend service.

Specific information is as follows:

London Underground‘s Gareth Powell said: “As well as making life easier for people, the night Tube will also boost London’s night-time economy – supporting thousands of jobs and stimulating hundreds of millions of pounds in economic growth”. Aslef has already announced its members will strike for 24 hours on 8 July from 21:30 BST over pay and conditions for the service.

However, not everyone is pleased with the new schedule, with Aslef District Organiser Finn Brennen saying, “It’s easy enough to produce a map, but if London Underground management want to have an all-night service in September, then they need to sit down and negotiate a fair deal for the staff they expect to provide it.”

Regardless of what side of the debate you are on, it is without a doubt that the new 24 hour service will be a welcome addition to many clubbers nightly travel planning. Though cities like New York have a 24 hour metro system, it remains somewhat unbelievable that other prominent destinations do not…Berlin, we’re looking at you next! 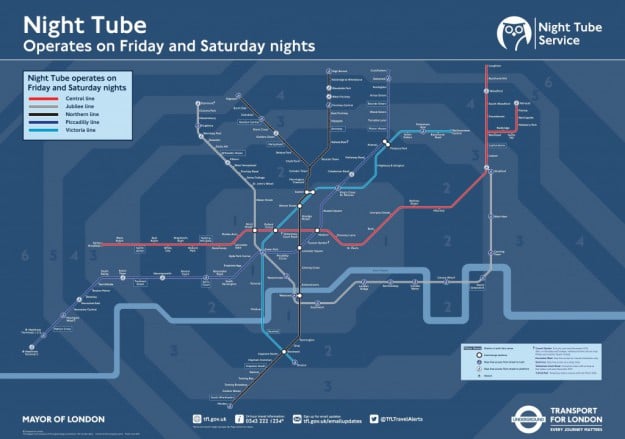