Across the Spree from Watergate, you can see the Berlin offices of Universal Music. From the façade of the office building, a group of LED lights shine through the club’s wall-to-wall glass windows, forming a pattern in the shape of the globe. Through the middle of the map, lights spell out one word: Universal. And that’s how this club feels.

Watergate draws a diverse crowd who come from around the world to dance under a unique light instillation that shines through the white walls and roof, while gazing across the Spree towards the opposite shore. Many say the view is emblematic of Berlin’s gradual renovation from Aber to Materiell. Once home to Ostgut (predecessor to Berghain) and the various walls, warehouses and artistic spaces of the city’s history, the last ten years have seen the gradual transformation of the banks of the Spree into Media Spree: a crisp row of apartments, office spaces and arenas approved by the Berlin Senate in 2002, the year Watergate came into being.

Having once stood safely at its heart, with the change on the Spree, Watergate now feels like it’s approaching the geographical periphery of Warschauerstraße’s nighttime offerings. And if you ask a Berliner, they’re likely to agree that given Watergate’s popularity among travellers, it is indeed becoming peripheral to Berlin’s night life. 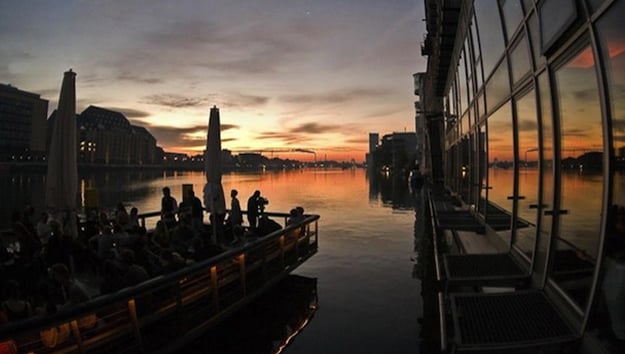 In a way, with its universal crowd and aesthetic, Watergate feels like it could be anywhere in the world. Closing your eyes last Friday night, however, you knew you were in Berlin. As heavy mid-tempo beats flooded the club from Anthea’s turntables downstairs and Tobi Neumann’s drum machine downstairs, it was easy to see why the sound so widely associated with Berlin finds such universal appeal.

Tobi Neumann matched the light show’s atmosphere by bringing a more melodic approach to his more recent output. Lively dance rhythms overlayed with hints of hip hop turned the main room into a party for all, characterised the rise and fall of his signature interlocking dynamics. Soaked in digital reverb and clinical glitches, his beats moved with purpose. Downstairs, Anthea struck a more focussed tone, entrancing the room with complex, agitated rhythms and ethereal, breath-like harmonies and melodies.

The danger Berlin faces today is that as its name for local authenticity spreads further around the world and deeper into popular culture, that authenticity gets harder to maintain. You see it in the rise of the Melbourne-style café, the cost of living, and new architecture along the Spree. But deep into 2014, the sound of Berlin holds its own: wily, inscrutable, fundamentalist, incorrigible. People will come and go, but nurtured by Watergate and the countless clubs who share its musical aesthetic, its sound will hold true.