Amsterdam’s Sugarfactory has unveiled its 10th annual line up for Amsterdam Dance Event (ADE). From October 14-18, national and international artists set off on five special nights and mornings in the intimate night club located near Leidseplein.

For those who can’t get enough, after parties with Art Department, Alex Bau and Flashmob are the place to be after 6am. Early evenings, Sugarfactory hosts several shows featuring live electronics and theatre performances.

Club 2CV & Nein Records present: A Love From Outer Space
Although ADE unofficially starts with Techno Tuesday, Sugarfactory kicks off the annual electronic music showcase in style on Wednesday. British label Nein Records teams up with Club2CV for an all-night set by A Love From Outer Space. Disco might be at the root of this party, but expect music in its broadest sense from widely respected selectors Andrew Weatherall and Sean Johnston.

Backspace x Donker present: Roush X WOW! label night
Thursday night has a line-up of heavyweights, with POPOF, Hector Couto, Cuartero and Mart-T on the chart. These major league DJs fly from show to show, and are bound for Sugarfactory’s dance floor during ADE. The smoking area is the playfield of local heroes Bram Fidder, Esther Duijn and others.

MN2S presents: Kerri Chandler / Kaoz Theory Label Takeover
MN2S uses Sugarfactory as its home base for the 10th time during ADE on the Friday night. This time the legendary Kerri Chandler presents his label Kaoz Theory. Chandler is one of the world’s soulful house icons. The showcase also features legends-in- the-making and home bred DJ duo Detroit Swindle. Filling out the rest of the bill are festival favorites DJ W!LD, Stephane Ghenacia and Chandler’s protégé, Voyeur.

NGHTDVSN presents: Systematic Recordings
Marc Romboy aka Mister Systematic is back again with his crew in Sugarfactory. On Saturday night, big names are set into the most of intimate settings. Stephan Bodzin, headliner extraordinaire, provides a steaming techno live set alongside with his label mates, including Audiojack. The Brits have played many parties in The Netherlands recently, building a solid fan base. Other DJ appearing this night are Dusty Kid, Namito, Roy RosefelD and Wehbba.

Afterparties
Anybody that doesn’t want to go home at 6am is welcome to Sugarfactory’s string of afterparties. Friday morning, Flashmob kicks off at Project Sugar for a unique, steamy party featuring this superstar DJ. Industrial techno is the sound of the Saturday morning during the Leider Kein Fruhstuck | Credo Showcase. Credo head honcho Alex Bau is spinning for a whopping four hours, while Folker Zwart takes the decks for three. Saturday night extends into Social Experiment with Art Department, Guti (live) and many others as Sunday rushes in. 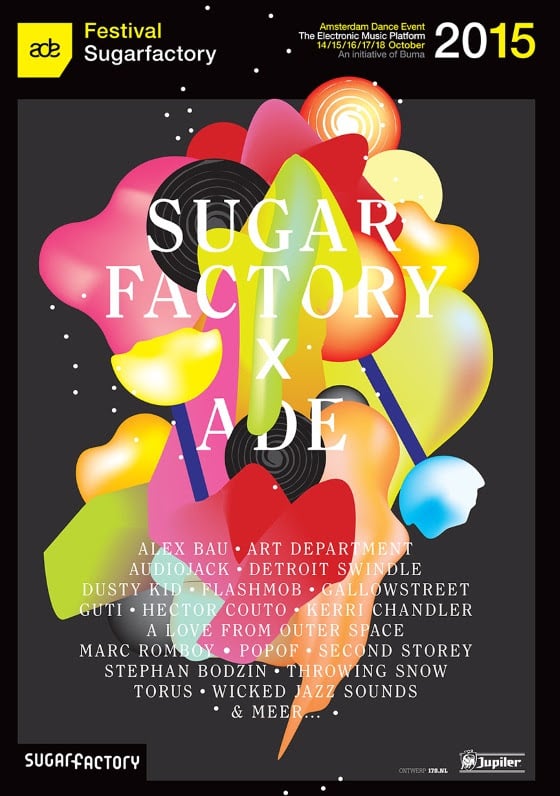