The two met, fooled around and played around, and, well you know, one thing led to ANOTR… No, I am not talking in riddles, this is rather a very simplified story of the beginning of the duo, ANOTR, consisting of two 21 year old Amsterdammers Jesse van der Heijden and Oguzhan Guney. After several years of exploration as Piotr & Zahn, the two settled down, if one could say so, to bring their energetic house-meets-tech-house sound to the dancefloors.

Quite recently the first eye-opening works sparked the interest of record label Armada Music, subsequently leading to the release of summer anthem ‘Strobe’ on Defected records breakout label DFTD in early October 2015. Despite their very young age, Jesse and Oguzhan have already been performing on the stages of Ibiza, Amsterdam Dance Event and had an active summer festival season.

The duo is about to get shoulder to shoulder on the stages of Amsterdam Dance Event again. This time lead by a stronger music muscle gained throughout a year of growing recognition from names as Groove Armada or Carl Craig, to name a few, and ANOTR name.

Together with Lost Frequencies, MÖWE, Pretty Pink, CALVO, Boy Kiss Girl, and Deepend ANOTR are to perform at Armada Deep on Thursday October 15th in the illustrious Heineken Experience venue, which has never seen an Amsterdam Dance Event party before. Right before that we caught them between preparations, to have a small chat on their past, present and the nearest.

First and foremost, nice to have you guys back since the last time as we included your Wonderland Festival Podcast in February. Aside the fact you have changed the name of the duo. How did this name change come about?
Nice to be back, thanks for having us. We decided it was time for a new sound and new identity. We were experimenting a lot when we first started Piotr & Zhan. We eventually came to a point where we got comfortable with the type of music we made and played.

So imagine you meet someone who never have heard you play, or someone you want to pitch for, how would you introduce yourselves?
Haha as ANOTR of course. No but in terms of characteristics you could say we stand for energetic, hard hitting, straight to the point techy-kind-off house. 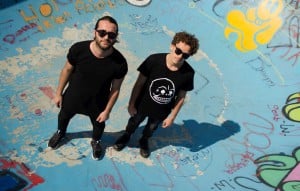 For some time, you have been playing separately. How did you two meet?
We live in the same area of Amsterdam and we had mutual friends. After knowing each other for a while we got together to make some music.

What connected you into a duo? What does the collaboration of the two of you bring to the duo?
We (almost) have the same kind of taste when it comes to music. It’s always good fun being in the studio and just jamming around. Lots of our tracks have been created that way. Next to that it’s always good that you can share good & bad moments with someone who’s in the same boat.

Your upcoming DFTD release ‘Strobe’ has been getting great feedback the industry. Do you feel that you have reached a new level of production professionalism and quality after you made this?
It’s always hard to say from yourself whether you’re reaching any new levels. Knowing we spent a whole year in the studio and practically releasing nothing, it feels really good to have some kind of recognition by receiving such great feedback from artists we admire.

“It’s always good fun being in the studio and just jamming around. Lots of our tracks have been created that way. Next to that it’s always good that you can share good & bad moments with someone who’s in the same boat.”

In the list of DJs that gave you all this positive feedback, whose name are you proudest of having in there?
The ones that really stand out for us are definitely: Groove Armada, Armand van Helden, Carl Craig, Mark Knight and Flashmob. These guys have been a great inspiration to us, the way we listen to, and make music.

A question on changing the name. What are the biggest differences from the days as soulful, jackin’ house of Piotr & Zhan compared to your current work as ANOTR?
We feel that we have a more mature sound then we used to have. When we are DJ’ing, people can now know what to expect of us instead of changing our sound every other month.

What are your limits within musical experimentation? What kind of musical styles would you never bother with?
We make all different kinds of music. We don’t really think in limits or boundaries. We make everything from hard techno to more melodic and chill stuff. As long as the music feels right, we make it.

Tell us a little bit about what do you have planned with ADE?
Aside of meeting lots of cool people from all over the world, we’re playing at Verknipt ADE on Thursday and Saturday. We’re also playing the Heineken Experience during Armada Deep ADE on Thursday.

If you would picture your dream collaboration at the moment, who would it be with?
We don’t know actually… When it comes to house music, anyone on the list we mentioned of above would definitely fit haha. Or of course Green Velvet. He has the sickest voice around and we would love to have that on one of our tracks.