From 9 – 12 November, India’s inaugural carnival of wonders – Wonderflip – A Magical Circus brings a selection of Europe and India’s finest DJ’s to a truly exotic location.

Held in rustic, rural Khempur, a 45-minute drive away from Udaipur, Wonderflip – A Magical Circus is a combination of the traditional world of the performing circus with the modern facilities of an outstanding festival experience. With two stages, immersive performances, art installations, and an outdoor bazaar, the Wonderflip experience will truly be a journey through the senses, all guided by the likes of dOP, Patrice Baumel, VAAL, Frankey & Sandrino, as well as several of India’s best.

With so much to think about, and the always heavy burden of planning your destination festival experience, we’ve highlighted 5 key aspects of Wonderflip – A Magical Circus that make it stand out from the crowd.

Check out all the information and remaining tickets at the end of the article.

Spearheaded by Ankytrixx, Wonderflip Festival not only brings a handful of Europe’s finest electronic music exports to India, but it also feature’s a who’s who of the countries best DJs and performance artists. For this highly desired market, Indian ambassadors of Dance Music like Bullzeye, Calm Chor, Grain, Hamza, SHFT, and more spanning the spectrum of music. It’s just a matter of time until these names are as household around the world as the Solomuns and Maceos of the world, so make sure you’re some of the select who already know why.

As we’ve featured, Ankytrixx has caught the attention of his home country with a dynamic stage presence and impeccable track selection, but he has also found support from International heavyweights like John Digweed, Dave Seaman, Guy J, Henry Saiz, Richie Hawtin, and Dubfire. One of the brains behind the operation, Ankyrixx has been named VH1 MyFavAwards Best Electronic DJ (2012/2013) two years in succession and the title of – VH1 MYFav DJ Of The Year (2013), as well as the recent India Nightlife Award – DJ of the Year (2017).

It’s true, the location had a namesake 2011 film, ‘The Best Exotic Marigold Hotel’ (and a 2015 sequel). Otherwise known as the Haveli, it is situated in Khempur, a small, traditional Rajasthani village with a population of just about 300 families who have opened their doors and generously welcomed the Wonderflip family into their world.

Two of our main residents, Kimou and Aeden, will be bringing a taste of Amsterdam to Wonderflip. During the festival’s three days, Kimou will kick things off on Thursday evening alongside the likes of Frankey & Sandrino, while Aeden joins Patrice Baumel and more on Friday.

Inaugural events are always a step into the unknown, giving a sense of mystery for organizer and audience alike. With Wonderflip being an intimate festival gathering and India’s first immersive performing arts and music festival, the feast of the senses also marks a new frontier in the rapidly developing Indian underground. 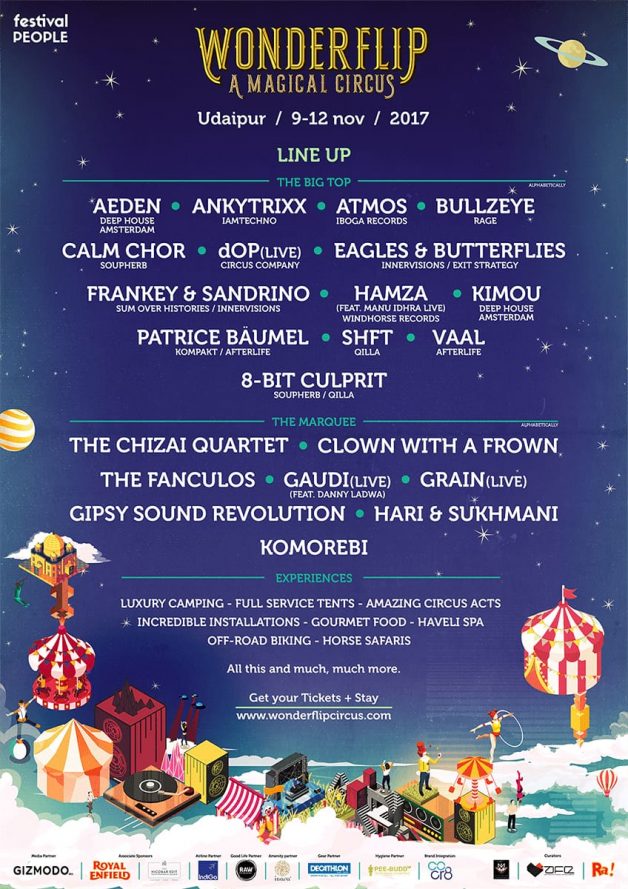