Last week it was time for the 19th edition of the Amsterdam Dance Event. More than 300.000 electronic music fans washed over Holland’s capital in search of their favourite DJ. Choosing from the list of over 450 parties with almost 2.500 artists is always one of most difficult tasks of the year. This time the combination of line-ups, friends, guest lists and fate brought me to DGTL, NGHTDVSN and Loveland.

Although ADE officially kicked off on Wednesday, my first event was on Thursday. DGTL organized three nights at the NDSM shipyard and for the first one they had invited Life & Death for a showcase. This was a chance for me to see DJ Tennis play live after interviewing him some weeks ago. He brought label artists Tale of Us, Mind Against, Job Jobse and Somne. Furthermore two befriended DJ’s who are a big inspiration to the label owners completed the line-up: DJ Harvey and Tobias. 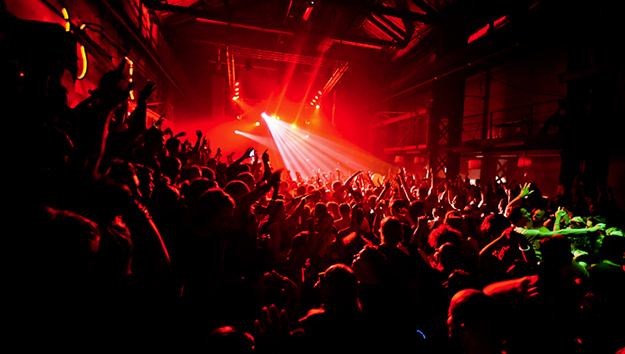 The former construction hall was divided in a big and a small area. First up were Somne, one half of Clockwork, and Job Jobse. Whereas the first was already playing firm techno, the latter played the low tempo dark deep house he is known for. Unfortunately the sound wasn’t great, but still the Trouw resident managed to start the arriving crowd up. Too bad that all his hard work was undone within half an hour by Harvey who took over with pure disco tracks at 15 to 20 beats per minute less. The crowd clearly wasn’t up for this and as he continued they slowly but surely left the room in search of something more up-tempo.

They didn’t have to look far, ‘cause meanwhile Ostgut Ton’s Tobias. (mind the .) was doing a live set full of techno. Actually, the difference in intensity and tempo between the two areas was so big, that it was hard to imagine you were at a label showcase. Sure Life & Death is a genre crossing imprint, but this strange build-up of the night prevented the party from taking off for quite a while. Luckily this changed when DJ Tennis and Tale of Us started their sets. Now a more in-between sound could be heard in both rooms. The people who felt like deep house with a techno edge were at Tale of Us followed by Mind Against, the more pop and disco minded at Tennis, who joined forces with Job Jobse to finish his set. In the end the less interesting hours were forgotten and around 7am I could go home satisfied after my first night at ADE.

The next day it was time for NGHTDVSN at Roest. Gabriel Ananda’s set last year at this event was certainly one to remember and the German was on the line-up again, alongside Terry Toner, Aril Brikha, Max Cooper, Einmusik and Arjuna Schiks. Very promising indeed. However, the night didn’t turn out to be as good as hoped for. The first downer was the long queue for the tokens and an even longer one at the toilets (which weren’t exactly for free either).

A bit frustrated I entered the big industrial hall that is Roest, only to find a sound system that was ripped from a random bar around the corner, or so it seemed. The volume was too low and the mid and high frequencies had a collective day off. My hopes that this was just a temporary problem were dashed and eventually I took my ear plugs out to be able to hear at least anything of the music being played.

Because of the sound handicap it was very hard to get the people moving, so it’s hard to judge the DJ’s on their sets. After Terry Toner and Aril Brikha, Gabriel Ananda played together with special guest Dominik Eulberg, which was strange, since he was cancelled a couple of days before. If this was a joke or a marketing stunt, it was a bad one. Just imagine you sold your ticket after reading your favourite DJ couldn’t make it. But who knows, maybe Eulberg’s visit was as big a surprise for the organization as for the crowd. 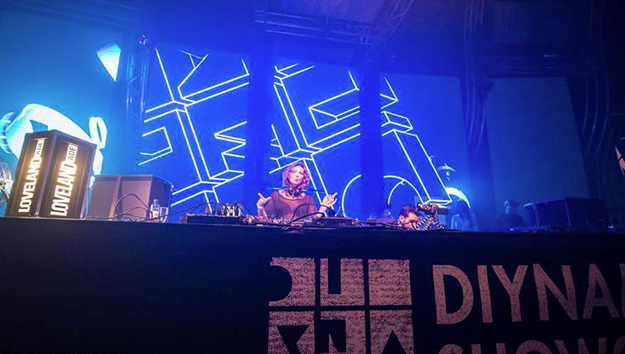 What also didn’t help the event was the time table. As said Ananda and Eulberg were up pretty early, followed prime time by Max Cooper, a quite experimental DJ/Producer. With only one room, this a very tricky decision and you could see many people struggling with his difficult live set, including me. Closing DJ’s were Einmusik and Arjuna Schiks, both skilful, but music wise an earlier time slot would have suited them better. All in all a disappointing night from an experienced organization. After a storm of negative posts on Facebook, NGHTDVSN came with a statement blaming the authorities for not allowing them to play louder. Now this may be true, but the lack of decibels wasn’t the only problem at this event. Besides that, visitors get no refund on their € 32,50 ticket.

The best thing to do after a night like this, is to visit another party as soon as possible. So Saturday I made my way to Media Haven, a new location in town which hosted a Loveland ADE trilogy. After Diynamic on Thursday and Cocoon on Friday, now Deep Dish, Rumors and Visionquest took over the new office building in Amsterdam West. What a difference this was with the night before. Everything that went wrong yesterday, was carefully taken care of by this organization. No queue at the entrance, token sales or (free of charge) toilets and a proper sound in every room. 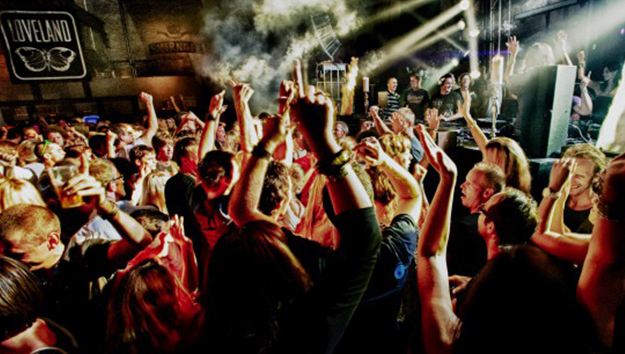 In Studio 1 Noir was playing a deep house set that immediately set a high standard for the rest of the night. The Danish DJ/Producer and label owner is used to being a headliner, but now he devoted himself to warming up the crowd. Respect for someone of his stature to know his place, a true professional. Deep Dish were up next for a five hour set. Ali ‘Dubfire’ Shirazinia and Sharam Tayebi both have their solo projects, but they can still rock a dance floor as a duo. The hours went by as minutes and although there were some big names in the other areas (Guy Gerber, Miss Kittin, Butch, to name but a few) I felt absolutely no need to leave the main room. As the end of their set drew closer the influence of Dubfire got bigger, but it was Sharam who pulled off the biggest trick of the night: playing Madonna’s ‘Get into the Groove’ at prime time. Definitely a set that matched the expectations, firm but melodic.

Like last summer at their festival, Loveland showed they are still one of the leading organizations in Amsterdam. With a cool new location and great line-ups over four days of ADE, they have re-invented themselves once again. Exactly like it’s supposed to at the world’s biggest dance event: showing the diversity of electronic music and the professional, grown-up business it has become. In the end, ADE 2014 was bigger than ever, not always better, but absolutely good enough to make me look forward to the next edition!