When we first heard about this piece of news we thought it was a joke. But it couldn’t be further from fiction. Practically ever since the end of WWII, it has been forbidden to dance in recreational venues they visited, this has included clubs since they first appeared on the island in the Pacific. When clubbers ignore this law they could count on being scolded by staff members or, in the worst case, be hauled off by law enforcers to the nearest police station. All that is about to change now though.

Only a few venues in the entire country had the pleasure of obtaining a ‘dancing license’, and could grant their guests the freedom of dancing, albeit that every single club needed to close its doors around midnight/1 AM. Japan is known for its vibrant dance music scene, flying over some of the biggest underground dance music artists every week. But through the anti-dancing law, called fueiho in Japanese, has created a serious crunch to the industry.

This week, however, the Japanese government decided to loosen its policy, with the Olympics of 2020 in its foresight and the fact that more and more clubbers travel to Japan for the clubbing experience there, which is said to be unique compared to the rest of the world. The new softening law was created last week, but still needs to make it through parliament. But as the LDP, which is now in power, hold a majority in both houses, objection to the bill is not to be expected. 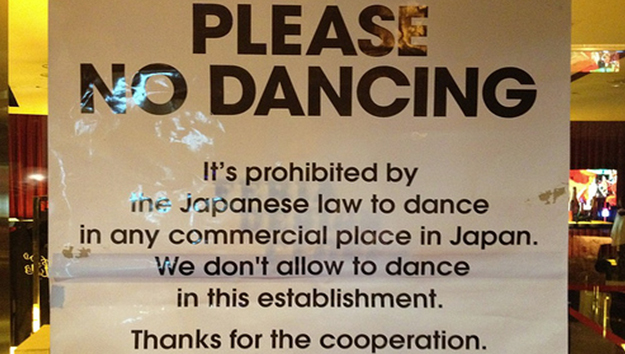 The history of the soon-to-be overturned law dates back to 1948 and was based upon controlling prostitution and gambling, which was getting completely out of hand after the war. Earlier resistance to the law came in the form of groups like Let’s Dance, a group of promoters, DJs and journalists opposing the archaic law and making it known to the rest of the world.

With this ban on dancing disappearing, dance music tourism and the visit of younger people during the Olympics will be more safeguarded than they were before. And, most importantly, Japanese youngsters now have a lot more reason to engage themselves in dance music.