Even though the story has already gone viral in the last week and it involves a rapper, we still think this is a story we just had to run with. If you’d spice it up here and there, the story reads as the script for feelgood movie of the year.

It starts rather tragic. Prince Harvey, a NY rapper pursuing his big break, moved into his friend’s apartment, as he was moving to LA himself. Harvey was unaware of the fact that his friend owed serious amounts of money to the landlord, who decided to change the locks of the apartment, with all valuables inside confiscated, “Within three days, the locks were changed, and all my musical equipment and computer were seized – all I had were my clothes.” 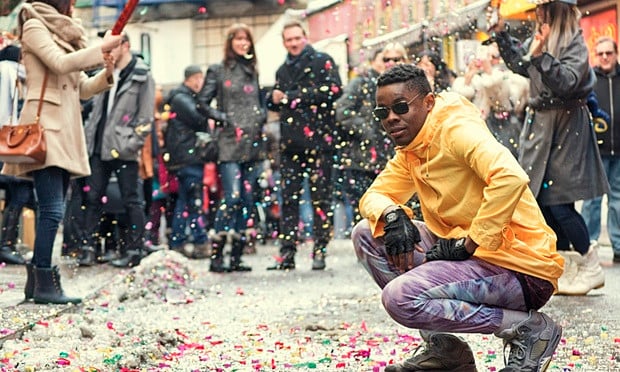 Harvey’s next step was daring to say the least, as he decided that now that he lacked the most basic tool to record, a computer (and the money to buy a new one), he needed to get one on loan. That’s where Soho’s Apple Store came in. He turned the Apple outlet in question into nothing less than a fully-fledged recording studio, where he would record his LP PHATASS (Prince Harvey At Apple Store Soho) which is due to be released by the end of this month.

The press release of his second single, The New Black, states that “The album features all acapella beats, produced by Harvey, using his own voice, the voice of friends, barking dogs, crying babies and various other vocal samples.” After trying to keep it secretive for a while, the store’s staff found out what Harvey had been keeping busy with soon enough. But instead of showing him out, they let him stay and produce music on their computers and equipment. “There were two employees who [..] said: ‘Hey, what he’s doing is really positive and creative. If anything, him demo-ing the equipment will drive sales.’ At the mention of sales, the managers kind of got with it.” Harvey became sort of an employee at one point, with many customers asking him tips on Garageband and the on sale gear he was using.

Producing the record inside the Apple Store took him four months in total. His story has now been picked up by media across the globe, and got a special mention by Talib Kweli on Twitter who admired his efforts. ‘Phatass’ will be in stores on July 27. And by the way, he already bought himself a new laptop. We’re wondering why Apple hasn’t given him one for free though.