Even though borrowed from a Swedish metal band, these lyrics well describe the mood and the cause of another event where house music mobilises Europeans to aid asylum seekers. This time it all takes place at Berlin’s About Blank

“We stand as one and ruled by none. To the sound of the underground”

Previously, we wrote on “Techno for Humanity”  in Antwerp, aimed at bringing the dance music community together to aid the current influx of refugee (asylum seekers) in need of safe European shelter. While there are those praising Germany’s role in the crisis, others call it as pragmatic as it is idealistic. Here, over ten German DJ’s will get together, pushing away all the politics and to mobilize for good. All the proceeds will do to the charity Moabit hilft! (Donations list can be seen here) and Rathaus Wilmersdorf, a shelter currently housing refugees.

See also: Techno For Humanity: What The World Can Learn From Dance Music

And it sure will be a hell of a mobilisation, with Palms Trax and Objekt as the ones standing behind the decks. Aside, Fred P, Arnaldo, Telephones and Lakuti shall also be hosting house and disco beats, while Benjamin Damage, and Barker & Baumecker together with Objekt will likely hit the tough tracks. 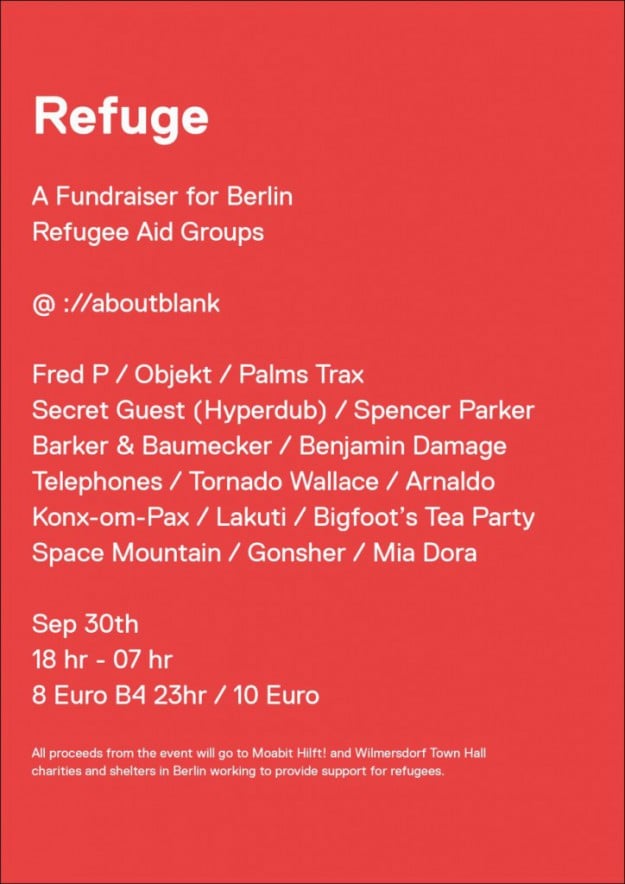