Thursday, September 17, marks an important day in the dance music calendar. No, it’s not the kick off to Winter Music Conference, ADE or BPM, but rather the day the dance music community came together in humanity and compassion to bring awareness to one of the most pressing human stories of our day.

Antwerp, Belgium’s club IKON will host a 3 room electronic music exclusive event, with some of the world’s leading artists in the field. Names like Mathias Tanzmann, Davide Squillace, Guti, Heidi, Butch, and more will bring their talents (and hearts) to the European port city for the one-off awareness fundraiser, aimed at bringing the community, continent, and world together in informed solidarity regarding the current influx of asylum seekers descending on nearly the entire European continent.

The event formed following an impassioned plea from its co-organiser Ida Engberg, along with partnership from some of the world’s foremost humanitarian organisations, including The UN Refugee Agency, International Rescue Committee, Migrant Off Shore Aid Station, and Médecins Sans Frontières, at lightning speed. In a world seemingly desensitised to consistent images of war, beheadings and bombings, Ida’s call for compassion found itself as a breath of fresh air in the cloud of conformity. Be it the visceral reality of a dead child washed ashore on European soil, or the heightened bigoted rhetoric spewed from the mouths of the continents right wing, it was now undeniably time for the world to act.

By this point, much conventional media coverage on the asylum seekers plight has been presented. Stories of crossing dangerous borders and rough seas for the sole intention of, in many cases, life at its most basic level: safety, shelter, and opportunity have filled social media feeds and spawned twitter handles galore. This has developed into passionate debate, which has now raged on and on and on, becoming increasingly bitter along the way. From Greece to Germany, the UK to the US, it is a debate representing the forefront of the contemporary ideological divide. A divide between generations as much as between political leanings, and all with the lives of thousands hanging in its whim.

It should not come as no surprise such a divide presents itself once again. Around the world, communities ripped apart by rising inequality, seemingly endless conflict, violent religious persecution, corporate interest, and hyper-nationalism, find themselves in need of life’s basics. Whether it is the struggle for universal health care in the United States, the hyper gentrification tearing London apart, or the continued social marginalisation of the women around the world, we are in a moment of great struggle over issues of self identity, where we must ask ourselves: Are we what we were or can we be something different….something better?

From the perspective of pure numbers, the reality is this: 12 million of Syria’s 22 million (2011) population have been forced from their homes. The reasons behind this are many, yet can be immediately traced back to the bloody civil war the country has endured over the last 4 years. Over that time, some 200-300 thousand people have lost their lives. Additionally, the general instability of the region has also given rise to the ISIS fundamentalist group, determined to create a radical Muslim caliphate across large parts of the country, as well as Iraq (The 2003 US-led invasion of Iraq also a major contributor to the general instability of the region). With barbary their only tool in dealing with perceived dissidents, the the innocent Syrian’s very real life or death struggle cannot be denied.

As support from its regional neighbours is virtually non existent, displaced and desperate Syrians looked to European shores, mostly by way of Southern Greece, Italy, and Malta, beginning early this summer. Boat after dilapidated boat anchored the Mediterranean, of which many never even arrived to the hopeful haven. Some were turned around and many were detained, leading to frequent clashes between seekers and security.

To many of our readership (who, I assume, find themselves generally liberal-leaning) such issues of passionate exclusion on the part of the West may not seem like issues at all. Obviously we accept those in need of their place. We are, after all, a community who was built on the backs of societies marginalized, overlooked, and downtrodden. Places like New York’s Paradise Garage or Berlin’s Tresor, were havens for those affected by sexual or economic hardships. Not to mention the countless events, parties, concepts, and tracks, which have pushed the boundaries of social acceptance (if not, social norms) in locations spanning the world. Yet, even with this, many outsiders still believe in the importance of divide, be it physical, ideological or social.

Electronic music, and the digital means by which it is overwhelmingly produced, distributed, and promoted, is inherently a worldwide mechanism. What is now a $6bn industry, our scene is a globally interconnected network, where a Japanese technology company holds the same agency as a Berlin PR house, or a Tel Aviv producer.  Our representatives come from every point on the globe, with those under represented, quickly striving (and able) to gain inclusion.

In my view (as well as how I found myself so attached to this music in the first place), dance music is amorphous. It shifts in emotional tone and atmosphere as much in the subjective mind of its listener as it does at its basic structural level. It is a music where emotion is not enunciated via written word but by its more abstract bretheren: sound. Sound, unlike language, is universal. A major scale is the same on a violin played in Carnegie Hall as it is on a synthesizer used in the depths of Berghain. Words, however, are not. Language is an inherent barrier in music. This is why many hits in Singapore (for example) may not become popular in, say, Brazil; but, sound is different. Our tracks are invited onto dancefloors the world over. From Zouk to De Edge, the groove is the same; the beat is the same; the moment is the same.

In my 15 years following the scene, I can humbly say I have traveled the world for it and with it. Operating in nearly every capacity from performer to publicist, I remain astounded by the sheer scope of electronic music culture. With that, I find its inclusive nature unsurprising. Again, with the barrier of language broken, the universality of sound has free reign. Coupled with its organic development rooted acceptance of all peoples, electronic music culture holds a unique place in the annals of music history. As times change (Trust me, 15 years ago I would NEVER have said the US would embrace dance music to the extent it does now), technology advances, communication frees, and information accessibility increases, shouldn’t we, as people, change with it?

With that, if you find yourself in Antwerp today, come to IKON and let your presence be known that this is a culture beyond the sensational headlines of drugs and debauchery. Come and let the Syrian people, and the world, know that you stand on the side of equality and compassion. Much like the universal, borderless nature of electronic music, and the sounds it was built on, let’s tell the powers that be that enough is enough. A change is needed. Take a page from our book and let them in! 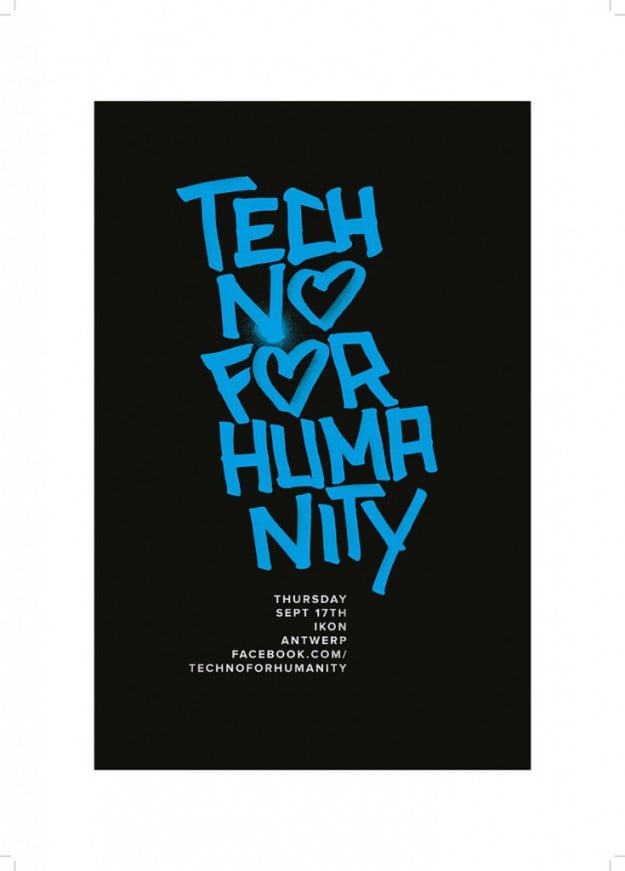