Burning Man, the annual gathering of tribal artistic, cultural, and social open-mindedness, is going through something of a crisis of identity with the newfound foray into mainstream circles. Case in point, new information on two $ONE MILLION tickets, via Stubhub.com, being hawked to the Nevada event.

Coming off the heals of steadily rising ticket prices, increased transportation regulations and, of course, demand, the 2015 festival edition has already encountered backlash, both ideological and technological, to the perceived track of the event and its mission.

Just last week 200 Silicon Valley (no doubt) tech elitists, hacked the festival’s ticketing system, jumping over thousands of patiently waiting would-be (queued) attendees. Couple this with the fact tickets to the ENTIRE event sold out in less than an hour’s time due to the events profile/registration/subjective choosing ticketing system, slews of burners have been left disappointed with this year’s edition via various avenues of displeasure. 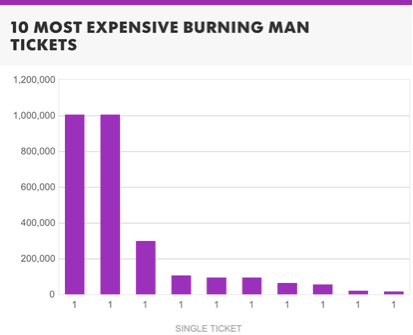 It is to note, that much of the evolution of Burning Man has come not as a result of organizer hypocrisy, but more a matter of the increased marketization of underground culture in the US and abroad. That being said, the organizations admirable attempts at keeping prices, as well as over crowding, to a minimum seems to be the very reason for such third party financial manipulation. Unfortunately, this does not seem to have any kind of resolution within a market-based system, aside from perhaps the recognition of the event as culturally significant at a state or even federal level.

Additionally, the UK has introduced new ticketing regulations, specifically designed to target third party “mass purchasers” who turn around to profit at some 10x face value, many times cheating unsuspecting fans out of ultimate value. With event and festival prices ever increasing, with no sign of reversing the trend, it seems as if regulation in the US is a more viable option of counteracting price manipulation.

Regardless, with all the blood, sweat and tears the Burning Man people have shed over the years to create and maintain this cultural institution, as well as the true fans to the Playa in increased jeopardy, it is mass ticket profiteers and elitists who ultimately prevail. With this system, the honest truth is THEY hold the power, rendering organizers, fans and faithful powerless to the invisible hand.