It’s said that a person can have good taste in music but what about the taste of music?

According to Experimental psychologist Charles Spence and researchers at the Crossmodal Research Laboratory at the University of Oxford, “There may be implicit associations between taste and pitch. High pitched sounds are mainly associated with sweet and sour tasting foods while low pitched notes are more commonly paired with more bitter and umami tastes.” For example, one particular experiment found Spence inviting participants to taste two seemingly different samples of toffee, one while listening to high-pitched sounds, and the other, while listening to lower frequencies. Although the samples were of the same object, subjects “found the toffee sweeter when paired with higher pitches and more bitter when accompanied by lower pitches.”

Spence’s research suggests that not only can the taste of food itself change depending on what you hear when you eat it, but that your taste itself can change based on auditory stimulus, going as far as to say, “People’s wine choices can be profoundly influenced (far more than any of us likely realise) by the music that happens to be playing in the background of a store.”

Outside the lab, these experiments are being translated into the real world. Inspired by the toffee experiment, Spence collaborated with artist Caroline Hobkinson to create a “sonic cake pop” at London experimental restaurant the House of Wolf. The dessert was a bittersweet toffee coated in chocolate that was accompanied by a telephone number. After calling the number, diners could decide to either press “one” for a sweeter dessert or “two” for a more bitter one and then corresponding high or low pitched notes were heard.

Take a look at the chart below, which correlates certain orchestral sections with their prominent flavour and tell us what music and food you would pair? 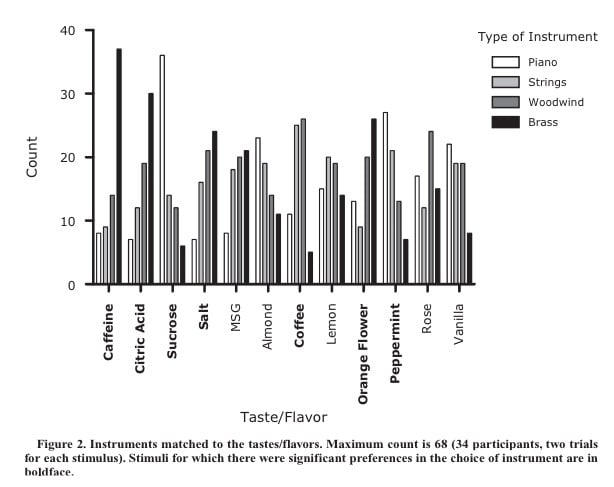