And you just did an of Rick James as Rens. “Yeah! The Rick James edit I did together with Melon to promote our evening in Trouw that weekend, where I would host the Verdieping with Paranoid London. So why Rick James? “Because he’s a really cool dude who was super talented. Next to playing many instruments and singing, he also produced his own and other people’s music too. I’ve always found him an interesting character, plus I also own a lot of his records, so that’s why he was a good choice for me to do an edit of.” Didn’t know he was also a producer. I just know him from the Dave Chapelle show I guess.. “I’m Rick James bitch!” Exactly, CHARLIE MURPHYYY!!

Rick James – Give It To Me Baby (Rens Worbier & Melon Edit)

What’s the most extravagant thing you’ve ever put on your rider? “Hmm I’m never really that outlandish with my riders. Some gin or vodka and a couple of water bottles usually suffice. But funny that you mention it because there is one thing that clubs just cannot seem to arrange, and that’s a towel. A towel? Yeah, towels to dry myself off during a show. I tend to get sweaty sometimes when I’m playing in full focus. But towels on a rider are just foreign language to most bookers apparently haha. And when they do have them they usually hand me this filthy bar rag with stains on it. At that point I just ask for a roll of toilet paper. So you can imagine what that looks like, frantically dabbing my sweaty forehead with sheets of toilet paper”.

Haha! I can imagine. So in the earlier interview you had with us this year you talked about how you don’t really like a lot of the new music that’s coming out nowadays. Why is that? “Because it all sounds so clinical and polished. I’m really from the old school. I like the analogue sound, always have, always will. Those stripped, raunchy house and techno records from the 80’s and 90’s from labels like Dance Mania still work best for me. It needs to have an edge in my opinion, and a lot of the new stuff nowadays just doesn’t seem to have it. Don’t get me wrong: the music that I like isn’t better, it’s just what I like best.”

Last month was a record-breaking period in vinyl sales across the world, including second hand sale of older records. Established and starting producers have lined up to get their hands on the new TR8 drum computer by Roland. Isn’t it actually all coming back now? “I hope that the younger generation will latch on to the same taste that I have! And perhaps we can have a sort of revival of the Chicago house sound, or whatever you want to call it. But then again, how original can you still be nowadays?” 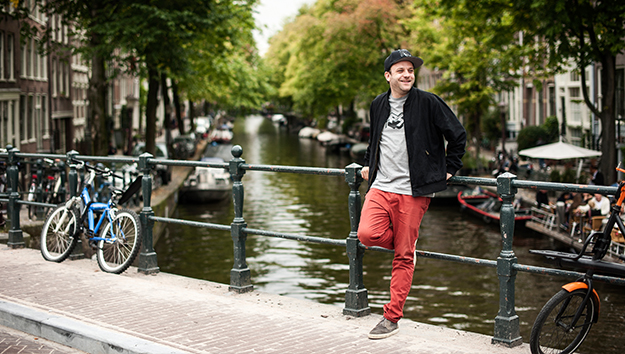 Do you feel like people less creative in this day and age? “Hmm, don’t know. I feel like a lot of new producers are not really true to themselves and just create something that looks a lot like what some other guy already did and grew famous with. It’s not bad or anything, I just try to keep away from such a mindset.” What is your style then? “I always go for the ‘indestructible groove’. It’s hard to describe your sound of course, but this is an accurate description for me.”

You’ve been in the game since the late nineties. What is something that you still want to have achieved for yourself in the business? “I feel like I still have to take that next big step. I have been in the business for fifteen years now and I can’t complain. But what’s lacking I guess is the whole persona that you need to create for yourself as a DJ nowadays, with an effective social media presence; the whole sideshow that you need to have worked out for yourself. I find that really difficult because I really don’t give a crap about facebook, but if you really want to be up there with the greats than you’re sort of obliged to be part of that game. But I’m working on promoting myself more than I used to so it’s heading in the right direction. And to answer your question simply: I want to have played on every continent. That’s my goal”

Finally: what is up with that whole bad boy image you seem to have. In every piece written about you it is mentioned, but never backed up by actual evidence. Is it true? “Haha no! And people should quit writing that bullshit haha! I speak my mind and I’m impulsive. I like to party, sure, but so do 99% of all other DJs. I have no idea who was the first to write this about me, but it seems like it has taken on a life of its own.”