Next week, Deep House Amsterdam will be arriving in Malta for its showcase there at BLANK Warehouse. BLANK operates as one of the key curators of underground house music events in the Mediterranean archipelago, which is starting to get noticed in Europe as a complete yet affordable alternative to Ibiza. With strong ties to the Dutch, German and English clubbing population that gather there throughout the year, affordable prices for food, drink and accommodation, beautiful beaches and tropical temperatures, Malta’s popularity is on the rise.

We hooked up with the BLANK’s manager, Franco Vella, to talk about the history of the organisation, the scene in Malta and where he got his inspiration from in Europe.

Can you describe how the dance scene in Malta came into existence?
I believe the 90’s were some of the best years regarding dance the island has ever seen. Apart from the weekly night at AXIS in St. Julians’, which was one of the best clubs in Europe at that time, the parties organised in Gozo during Easter and in mid-August were the most awaited. I remember the ferry used to be filled up with colourful, crazy-haired ravers playing dance music on their cassette players, ready to have the time of their life. These were the experimental years during which the aim of the party, especially the illegal ones, was to have fun. Money came second. Before long, this hype had already reached its peak and started decreasing in popularity. Clubbing was resurrected in the late 2000’s together with the new hybrid styles such as tech house. During this shift in music genres, new clubs and party organisations such as BLANK were born.

What is BLANK exactly in your view, and what role does it play in Malta nightlife?
BLANK is a creative dance event agency that provides memorable experiences to attending music lovers by choosing particular venues and inviting renowned artists from all over the globe, without losing sight of quality or service. BLANK also works closely with major European dance festival
organisers who are interested in establishing a presence on the island of Malta.

Does the party scene on Malta consist mostly of tourists or locals?
Till now the crowd consists mostly of locals but the number of tourists is rapidly increasing. Our mission is to make sure tourists returns home with a good feeling about BLANK as well as the island of Malta. We are a relatively young organisation, so we expect to draw a bigger audience to our events in the future. Both locals and tourists.

What is your main competitive advantage against Croatia as a party paradise?
I don’t know Croatia very well, but I do believe that the friendly character of Malta is one of the most remarkable things.

Could you tell us a bit about the history of the warehouse location where the DHA showcase will be held? What was it before it was a club?
The warehouse is 102 years old and was built when Malta was still a British colony. From our research it used to be a storage space for army vehicles and helicopters. The warehouse is not a club, but in fact the first indoor skate park on Malta. BLANK will host the closing party of the annual three-day BMX Fest, international BMX riders fly in to compete during this event, for the third year in a row.

Are there any plans to host multiple-day festivals in the future?
We are already exchanging ideas with a couple of Dutch festival organisers to make this multiple-day dance festival happen.

During which party/festival in Europe did you and the other people behind BLANK find the inspiration for organising the same kind of parties on Malta? Or was there another reason?
Almost every party/festival is unique in some way; be it is the music selection, location, decor and also the people. I personally love the small intimate parties in random locations during Kingsday or ADE, but am also amazed by the level of innovation and attention to detail during festivals like Glastonbury or DGTL.

How come your basis of promotion and partners is predominantly in The Netherlands?
Through a common friend I met MC Complicated who introduced me to the best clubs, festivals and people in The Netherlands. I have been to numerous parties and events in other countries, but when it comes to dance music the Dutch deliver, by far, the best experiences. They somehow always know how to make an event complete, everything is very well organised and thought-through. 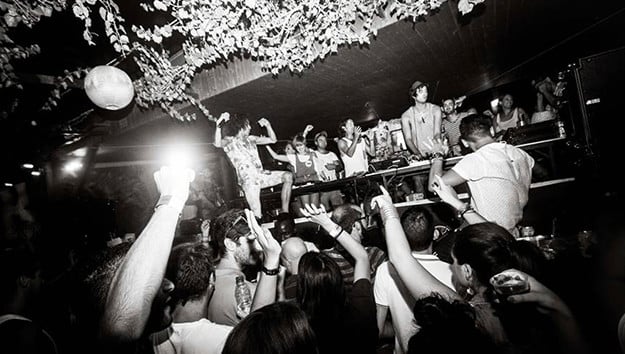 Last week BBC radio host, Annie Mac, announced her Lost & Found party on Malta. It seems more people found out about the beautiful Maltese island, how do you see the Island grow towards more events of this size?
I always believed in the potential of the Maltese islands. Malta does give a special feeling. And whoever has visited can confirm this. Malta has a lot to learn and improve on, we tend to take it easy, but I believe that’s what keeps Malta so positive and growing steadily. Lost & Found is going to be a milestone which will offer new opportunities and put Malta on the festival map. Increased popularity, however, comes at a price. I really hope that Malta doesn’t become the next Ibiza – as some people are calling it that already – but stays the intimate clubbing island it is now.

What is, next to the partying, something that you recommend people see or do on the Island when hanging around for a few extra days?
The beauty of the island is that in such a small space there’s so much to do. From history and culture when visiting Mdina, Gozo and the village feasts happening every weekend during summer, to adventurous scuba diving, abseiling and going around the islands by boat. For the rest, relaxing on one of our beautiful beaches is a must – just don’t forget your sunscreen!