On Saturday 22 March, the British label Wolf Music will make hold a showcase at Studio 80. Residents Medlar, Greymatter en KRL will be flown in for a monstruous edition of Animo, a side project by Amsterdam party instigators Jongens v/d Wereld. Label bosses Matt & Stu will be joining the festivities as well, Wolf Music Recordings began life in 2009, and was created by two house and disco fanatics who wanted an outlet for their creative endeavors. Wolf has always been about the real house culture, they try to stay true to the classical aesthetic, whilst being focused on pushing it forward into new territories. The upcoming event was the perfect opportunity to have a chat with the visionaries that have made Wolf Music to what it is today. Read about their opinions on the Dutch house scene, their ideas on the vinyl comeback and who need to keep our eyes on. 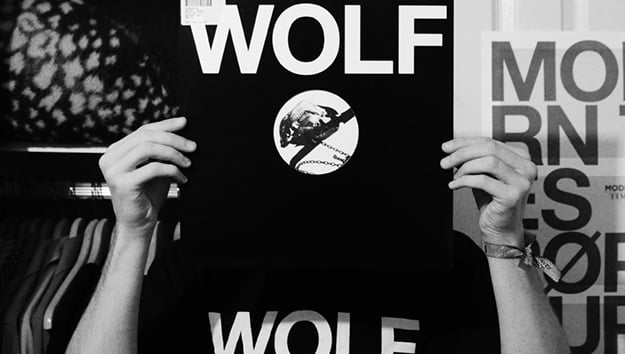 Hey Stuart, it’s the second time you’ll be coming over to Amsterdam for a Wolf Music labelnight. This time it’s in the Studio 80 though. Seeing as Medlar is a very welcome guest here and KRL has been booked for other events as well, it seems you guys like this city. What’s your connection with Amsterdam?
This will actually be our fourth time playing in Amsterdam and apart from London, I don’t think any of us have played anywhere more times. It’s starting to feel like our second home. I’m not sure if there’s any particular connection but we certainly have a great fun everytime we come to the city.

Could you tell us something you noticed about the Dutch house scene? Be it the audience or the producers; what major differences with the UK do you notice?
The Dutch scene seems particularly healthy, not just in Amsterdam but in Rotterdam and Utrecht as well. They’re quite small in comparison to some of our major cities but the parties easily rival ones in the UK. The Dutch are a particularly cool nation and I think that’s quite apparent when you guys party as well. Always a good vibe and open-minded musically.

In the past, Wolf Music has been a playground for various house-oriented artists from the UK at the top of their game. What differentiates Wolf Music Records from other record labels concerning the continuity in sound you’re aiming to release?
Wolf is built around its three resident producers, Greymatter, KRL & Medlar who have been with us from the very beginning. We’ve always been about developing them as artists and growing with them. I think that is one of the reasons we stand apart from other labels who will look to sign an artist purely because he is flavour of the month, before the label moves on to the next ‘cool’ sound. In the last year we have added to the resident producers by welcoming Ishmael into the ‘Pack’.

What made you decide to set up your own house label? What was the original vision of Wolf Music?
Matt was given the opportunity to re-release Atmosfear ‘Dancing In Outer Space’ and didn’t think it would work with the label he was running at the time. We had been good friends for some time at that point and discussed working on a project together and this seemed perfect. The name Wolf comes from a nickname Matt gave me the first time we met. The original vision was to release music from a small pool of artists and try to release music that was wide ranging in terms of tempo and style. I think we are staying true to that idea.

All of your releases are on vinyl. Vinyl has been growing in popularity the last years and continues to do so. Why did you choose to invest in this medium?
When we started the label five years ago, vinyl certainly didn’t seem as popular as it does now but it’s the medium we still love to play out when we DJ so it felt right to release the music on vinyl. We’re true believers in letting as many people as possible access our music, that’s why we will release digitally as well. Late last year we started our ‘WOLF White’ series of releases that are only available on vinyl as a way of giving a nod to those vinyl heads that have supported us through the years.

What are some artists to keep track of in the near future?
The guy who immediately stands out is Frits Wentink, such a talented guy with a unique sound. I think it will be a great year for him. I’m looking to hearing what Damiano Von Eckert has got lined up this year as his Love Based Music album was particularly strong. From our side, Ishmael & Thrilogy are sending us some great music and are really developing as artists.

What can we expect from Wolf Music concerning the sound, style, releases and artists in 2014?
We have plenty of releases lined up for this year. This week 12″ versions and remixes from Medlar’s ‘Sleep’ album are being released. The ‘Wolf white’ series will continue with Creative Swing Alliance, Thrilogy, Inkswel, Ron Basejam & Chicago Damn. We also have Greymatter’s album, “Visions” which will drop in May as well as an EP from Dutch
artists, like Homework. Plus full EPs from Ishmael & Red Rack’em. Also a mini album from Frits Wentink.