Face tattoo-afficionado, professional photographer and world’s most infamous bouncer, Sven Marquardt, has given an interview to GQ Magazine. Marquardt answered elaborately on questions ranging from subjects such as East Berlin at the time of the Wall, the fetish parties at Ostgut (Berghain’s predecessor), why he only wears black and more.

Because Sven has become as famous as many of the DJs that have played the club he works for, we just had to share some of the professional bogeyman’s most interesting bits from his chat with the men’s magazine.

“Last weekend I actually wore all white at the door, to mess with everybody”

You grew up in East Berlin, and Berghain itself seems to be a very East German sort of place—it specializes in minimalist German techno, it exists in a massive East German power station. Does your upbringing influence how you look at the world?
The eighties in East Berlin was a very weird time. On the one hand, everything seemed so quiet and peaceful—you kind of forgot that there was this weird political party that controlled and governed everything. On the other hand, a couple of times a year there would be these parades where tanks rolled down the street, and all these people you didn’t recognize would be there cheering—I think they were shipped in, actually. And of course we weren’t allowed to leave the country.

I felt like we were always looking beyond the wall—what’s out there? We couldn’t actually have any of it, but we were trying to soak it up, sense what was different and new and let it inspire us. Then we’d get creative with what we did have.

So how does a professional photographer end up running the door at Berlin’s most famous nightclub?
After the wall fell, East Berlin was almost anarchistic. Companies just didn’t exist anymore. I’d been shooting for Sibylle, an East German fashion magazine, but that kind of work really dried up. At the same time, though, almost anything was possible. You could break into empty apartment buildings or empty warehouses and just do what you wanted: install a makeshift bar, open up a club, celebrate and party until dawn. It was this phenomenal, fascinating, vibrant feeling. I was completely sucked into it.

At the time my younger brother, Oliver, was becoming a big part of Berlin’s electronic music scene. He had always been the DJ at school dances—back then it was with tapes and cassette players—but all of the sudden, as techno took off, he was organizing these big parties professionally. I hadn’t been too interested in all that at first, but I needed to make some money. He was organizing a party at an old shoe store—around the block from here, actually—that would run for three consecutive weekends, and asked if I could help out. That’s how I got my first job as a doorman.

What was nightlife like after the wall fell?
Nothing was very permanent. A club would be in one place, then relocate, then relocate again. The first permanent doorman job I had was at a building called “Bienenkorb” [Beehive]. There was a whorehouse in the front and the club was in the back, called “Suicides.” At some point I started working for a party called Ostgut—it was a gay fetish party—and that moved around for a while and at a certain point moved into the power station and became Berghain. The company that runs Berghain is still called Ostgut GmbH, in fact. We still have fetish parties once or twice a year. 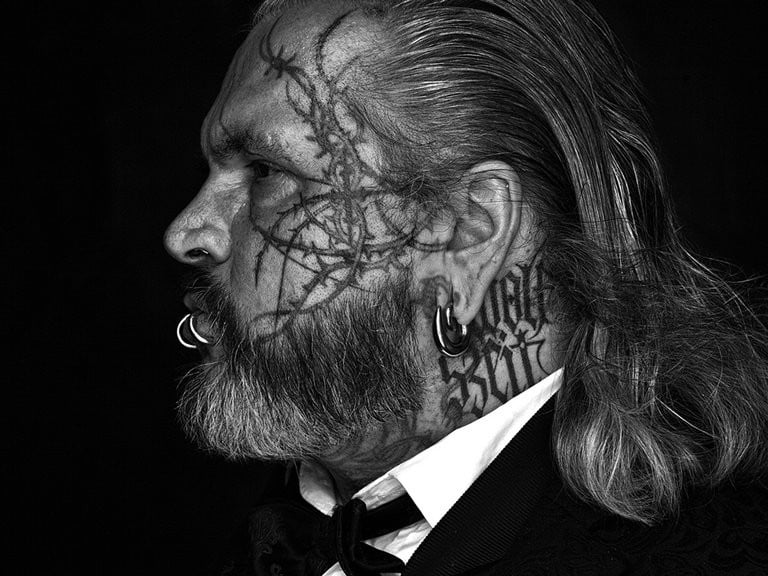 Do you dress differently for work than you do at home?
How I dress depends a lot more on my general mood than on where I’m going. For example, there was a time when I really loved bowties—just the way they looked against my face tattoos. So I’d wear them everywhere, even when I went to the supermarket. Right now it’s definitely about leather jackets. The one I’m wearing today, for example, is from Preach, a label based in Dusseldorf.

Where did you get those rings? The one on your middle finger…is that a big pile of skulls?
I’ve collected all my rings over the last 20 years, my necklaces too. Most of them aren’t from major fashion labels or anything, they’re just associated with personal memories. The skulls ring is from a label though, Wildcat in London.

Berghain is now associated with that sort of aesthetic—black, gothic, minimalist. If you suddenly wanted to switch up your style and start wearing pastels and boat shoes, could you?
No way! Honestly I don’t like pastels and I’ve never worn boat shoes. I’ve never once worn sneakers. My colleagues tease me about it, like hey, Sven, why don’t you dress more colorfully, so the guests will stop wearing all black? But really, black just happens to be in fashion with the new generation, too. And honestly, I think sneakers are cool. They’re just not my style. Some of my colleagues have entire rooms filled with New Balances. And last weekend I actually wore all white at the door, to mess with everybody.

So what do you tell your guys working the door to look for in the line when they decide who comes in?
It’s subjective. Only a few of my guys are allowed to select guests at the door. They have to understand what Berghain is all about first and I try to give them that foundation. Beyond that, there are no set rules. My people all have their own personalities, and you can see their sensibilities reflected in the crowd over the course of their shifts. You always want friction, though. That’s the theme in any good club: diversity, friction.

When you say you teach them “what Berghain is all about,” what do you mean, then?
I feel like I have a responsibility to make Berghain a safe place for people who come purely to enjoy the music and celebrate—to preserve it as a place where people can forget about space and time for a little while and enjoy themselves. The club evolved from the gay scene in Berlin in the nineties. It’s important to me we preserve some of that heritage, that it still feels like a welcoming place for the original sort of club-goers. If we were just a club full of models, pretty people all dressed in black, it would be nice to look at for a half an hour, but God, that would be boring. It would feel less tolerant, too.

Do you feel like the face tattoo changed the way people look at you, how they interact with you?
I’ve never regretted it. I mean, it was pretty much clear I wasn’t going to go into banking.

“How to Get Into Berghain” has become an object of fascination on the Internet. There are many sites that speculate on the many and various things one should do to get in.
First, let me say I don’t read that kind of stuff. Myself, I only started using the Internet three years ago. Up until then people had to fax me.

I’d like to read you a few of the tips that have been posted online, and get your reactions to them.
[Marquardt looks stonefaced] I’m listening.

Go early. Don’t try to cut the line. Know who’s DJing that night. Dress casually – jeans and a t-shirt is best. Don’t go in a big group. Don’t be too young. Don’t joke or laugh in line. Don’t speak in the line. Or if you must, speak German.
[Laughs, shrugs]. We’ve heard all those things too. But like I said, it’s subjective.