Local heroes in Kiev since 2009, Woo York connect listeners with their trippy, melodic techno through a string of releases with likes of Dystopian, Life & Death and Soma. They’ve performed numerous showcases around the world whether it being with pure dance floor Techno, more experimental material, or a combination of both.

Also enjoying a close relationship with Tale Of Us, Woo York have played numerous Afterlife events, appeared on both Afterlife compilations and also remixed Tale Of Us’ album. Last month, they debuted their debut album, “Chasing The Dream”, via the imprint. With that on the shelves and a busy summer of touring and Afterlife events at Hï Ibiza and beyond, we spoke with the renowned live performers on everything from the creative process to the rigours of touring.

Your LP ‘Chasing the Dream’ was released last month via Afterlife. As I ask every creative, what was the projects starting point?
Playing a live set brings you the luxury of creating new musical moments on the fly as well as testing these new moments and seeing how the audience reacts to them. While touring we have accumulated a lot of such ideas and at some point we realized that if we take all of them we can create a complete musical story of varying emotional shades which are represented by separate tracks. Our musical story is “Chasing The Dream”. So, we can say that the starting point was when some musical ideas were created at this or that club or festival whilst we were touring over the last years. The only thing we had to do after is to sit in the studio and record all these ideas that were present in forms of midi sequences to the track instances.

What would you say was the single most important piece of equipment/hardware/software used in developing and constructing the album?
It’s just impossible to name just one single device, as the foundation of the album contains a collection of synthesizers we use in every track, and actually it’s also everything we take with us on tour, nevertheless if we still need to choose one, the most distinctive would be Acid synthesizers. To create the signature acid lines we use 2 of them in layers (Xoxbox and MAM MB33). These guys are an integral part of the Woo York sound.

Describe Afterlife as both a label and a brand? How do you find the creative atmosphere there? What would you say Afterlife offers to the wider dance music community?
Afterlife, on the first place is a family, a community of creative, energetic and professional people that are passionate about what they do. Initially Tale Of Us invented the idea of how the perfect musical journey should “look” like, the idea about club nights and shows that will reflect this vision and bring the audience a to unique experience. This goes beyond lights and visuals, as sound, architecture, installations, colors, and even textures all come into play. As a label Afterlife represents like-minded fellow artists, and friends that believe in this idea and are willing to contribute their music to it.

How did your relationship with Tale Of Us aid your own growth and evolution as artists?
Back in around 2013 we accidentally noticed that Tale Of Us played some of our tracks in their Time Warp set, at this time we already had some abroad tours and played in venues like Berghain and Tresor, but there was not a lot of them. So, we saw that guys were constantly playing our tracks and we decided to get in touch and see what happens next. In the next year we recorded several tracks and sent them to the guys, that’s how “Valley of Songs” appeared on Life and Death. This release brought us a major exposure and we started touring like crazy in comparison to what we had before. A year later, Matteo (from Tale Of Us) told us they were about to create something special, explained the conception and idea and invited to join this new journey, it’s how we got to Afterlife. After a few years of touring with Afterlife team we definitely got so many valuable experience that definitely shaped us as artists and our profile grew in a big way.

On the flip side, what would you say your influence has been on them?
Can’t really say we really influenced the guys personally in any way.

You will naturally be part of many Afterlife events in Ibiza and beyond, including its Hi Ibiza residency. In your experiences last year, how did you see Afterlife on Ibiza? What were some top moments for you?
Last year we had several Ibiza gigs, and we can say with 100% that Afterlife events were the most memorable for us. There are several factors for this. First, the people who are visiting Afterlife. It is a very big and strong community that is traveling the world for the events. It is so great when people know your style, your music, even when we played some new things, remember the musical ideas we mentioned, they perceive them so openly and so well. For us it’s very important to know that we are understood by the crowd, and we have always had this luxury at Afterlife events and Ibiza was not an exception. Moreover we do think that this year it will be even better… Have you seen this lineup? it’s just crazy, so many great artists, the biggest names, really unique underground acts will visit the island this year for Afterlife, and we are so excited to see this new Hi Ibiza and to shake its walls with our moog sub bass as well.

What other Afterlife related events are you most looking forward to through the rest of the year? I just read of a 24 hour ADE event…
Yes, so unfortunately we can’t open all cards now, but there would be a series of events in Europe that we have already confirmed with Afterlife. Regarding ADE, last year we missed it because exactly these days I (Denys) became a father, so I was just a bit busy with figuring out how to survive the new role ☺ which make this year ADE even more exciting. Also, with the album being released it’s just a total must for us to represent it during Amsterdam Dance Event.

Describe the electronic underground in your native Ukraine these days. What are its strengths/weaknesses? What do you feel is missing? What do you feel makes it strong/unique?
Today it is a new stage in the heyday of the electronic scene. It was never in such a healthy state as it is now. New event series are opening, labels are created, new festivals appearing, but still there is a lot of growth to come. At the moment Kiev has one and a half clubs that are booking internationally recognized electronic music artists, which is for sure not enough as there is almost no competition and competition is an engine of progress. There are many people that are still thinking with categories like “A Native – A Stranger” and if you are not a part of the local “gang”, if you are not going out regularly, you are not recognized. Interesting fact is that since one infamous club in Kiev was opened, we never got booked there. It’s so amusingly, that while on tour we are often asked about the situation with scene in Kiev, clubs etc.., everybody is so surprised to find out that while we are touring around the world, we are still not very much recognized in our own city, which is funny and a sad the same time, but we try not to take it close to heart and move on. It was never our priority in the end.

What are some things you’re most looking forward to through the rest of 2018?
We are now working on a special and actually the first one in our career complete studio live recording for 1 hour, huge effort already was put in it and we are so excited to announce about all details, but let’s keep a bit of enigma and wait just a bit. Also we have confirmed our participation in very interesting project by one of the labels we were working in past, but again we can’t open all cards now, would love to, but promised to keep silence till official announcement, you know the game… And for sure, working on a new music now, despite we have just release an album we are already planning our next ep, and waiting for time to sit in studio and record all the new ideas. Rather than that, constantly touring… a lot of interesting gigs coming up this year.

How do you guys maintain mindfulness through all your travels? Do you have a specific process or protocol?
We try to be healthy you know. We do not use drugs, try not to do much alcohol and working out in gym at least 2 times a week. Also, healthy food and a good dose of positive thinking is what keeps us on track. 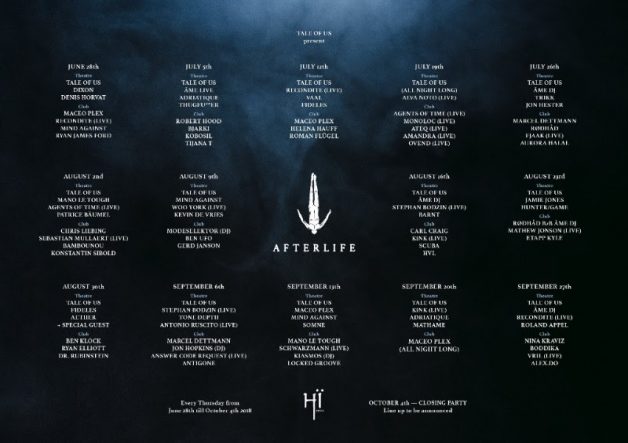