Influential and much loved house crew Hard Times are all ready to make their first season of appearances in Ibiza this summer.

The famous house brand, label and party that started way back in the ‘90s and were influential in introducing the UK to US house music and its key artists has lined-up a stunning season of events at Vista Club, in the grounds of Privilege Ibiza. Kicking off with a huge opening party on June 20th featuring Todd Terry, Junior Sanchez, Mark Fanciulli, NiCe7, Mat Playford, and Jason Bye, it runs until September 12th so it’s sure to be one of the hottest new nights on the island this summer. Following the opening, great weekly parties are lined-up with the likes of legendary international DJs and producers from the worlds of house and techno including Roger Sanchez, Derrick Carter, DJ Sneak, Mark Fanciulli, Doc Martin, Doorly, Mat Playford, Hector Romero, Brett Johnson and many more to be announced.

Hard Times is a definite house night with a big history. It was one of the first to break US acts like Roger Sanchez, Todd Terry and David Morales in the UK, and has stuck with them ever since. Hard Times events both in Yorkshire and the capital were, and are always, road block occasions with crowds young and old packing out venues and dancing like they don’t have a care in the world. Nowadays the label is focussed on the future and as such will offer some stunning line-ups in Ibiza that will marry their great heritage with the evolutionary tastes of the brand as it is in 2015.

Hard Times’ ethos has always been about the music, so it makes perfect sense that they have a well tuned and expertly installed Funktion One sound system for all their events this summer. Couple that with killer line-ups, great production and a happy crowd, and Hard Times is sure to be one of the best new events in Ibiza all summer long. 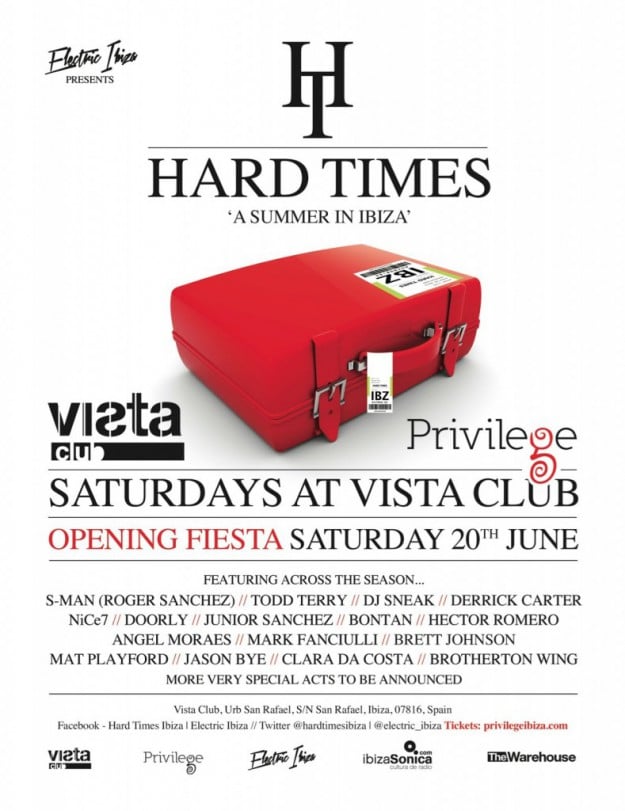