Since 2009, LEON has been making waves for himself in the underground electronic music world.

As a resident of Marco Carola‘s Music On concept from the beginning, he has carved out quite a reputation in such a short period of time and this looks set to grow and grow. With over 10 years behind the decks, its not hard to see why LEON’s reputation has skyrocketed over the the past years. Aside from Music On, he has found himself at the likes of Cocorico in Italy, Pacha & Cielo in New York, Ministry Of Sound London, Zouk Singapore, Arma 17 Moscow, Sunwaves Romania, Monza Frankfurt and many many more, while releasing on imprints like ViVA, Cecille, and Cocoon.

This week, LEON returns to the world of Music On as he joins Paco Osuna and Joey Daniel in Amnesia‘s Club Room, while Marco Carola and Felix da Housecat handle duties on The Terrace. Ahead of that event, we caught up with LEON in Ibiza to discuss his impressions of Music On the year that is and the year that was, Ibiza, and more.

Once again you will be a resident at Music On. After last year and the successful one-off events, how does it feel to still be a part of such a renowned concept?
I’ve been resident of Music On for six years, from the very first day. I am very happy about that. They really believe in me as an artist and for me it is one of the most important electronic music parties in the world

Can you give us some of your impressions of Music On during the 2016 season? What were some highlights for you?
It was an incredible season, maybe one of the best. Every Friday was almost sold out and I particularly remember the opening party, when I played on the Terrace with Marco Carola, and the two-day closing party that was pure madness. No other party had done anything like that on the island…

How do you see Music On 2017 expanding on 2016?
It is much better structured in terms of sound and lights and LED wall games

Do you have any specific Music On performances this summer you are looking particularly forward to?
THE CLOSING PARTY ON THE TERRACE

In your view, what does Music On mean to the contemporary state of Ibiza clubbing?
It is a point of reference for quality in electronic music

How would you describe Marco Carola as a captain of the brand?
Marco is one of the strongest DJs in the world and every year he is getting better and better… that is his secret, he does not care about anything but to search for new music, he is an idol for us and a master

How do you prepare yourself (mentally and physically) for the demands of the summer schedule? What about after the season, how do you “wind down”?
I eat well, I sleep as much as I can, and after the season… I will take a small holiday, at least one week, maybe with the family!!! Although in fact, that will happen in January and not before 🙂

Outside of Music On, are there any destinations you have planned that you’re looking forward to? Even if it’s for a personal trip…
I’m very much taking care of all of the summer dates. My agenda is very full, this will be a busy summer for me and I will try to do my best – putting my mind and body into it. I will perform at important festivals and I will also tour several times in North and South America !!! 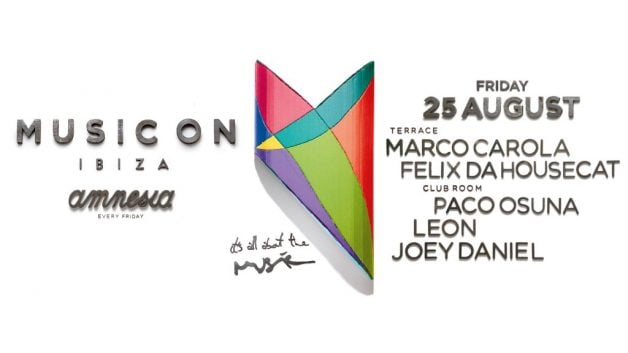